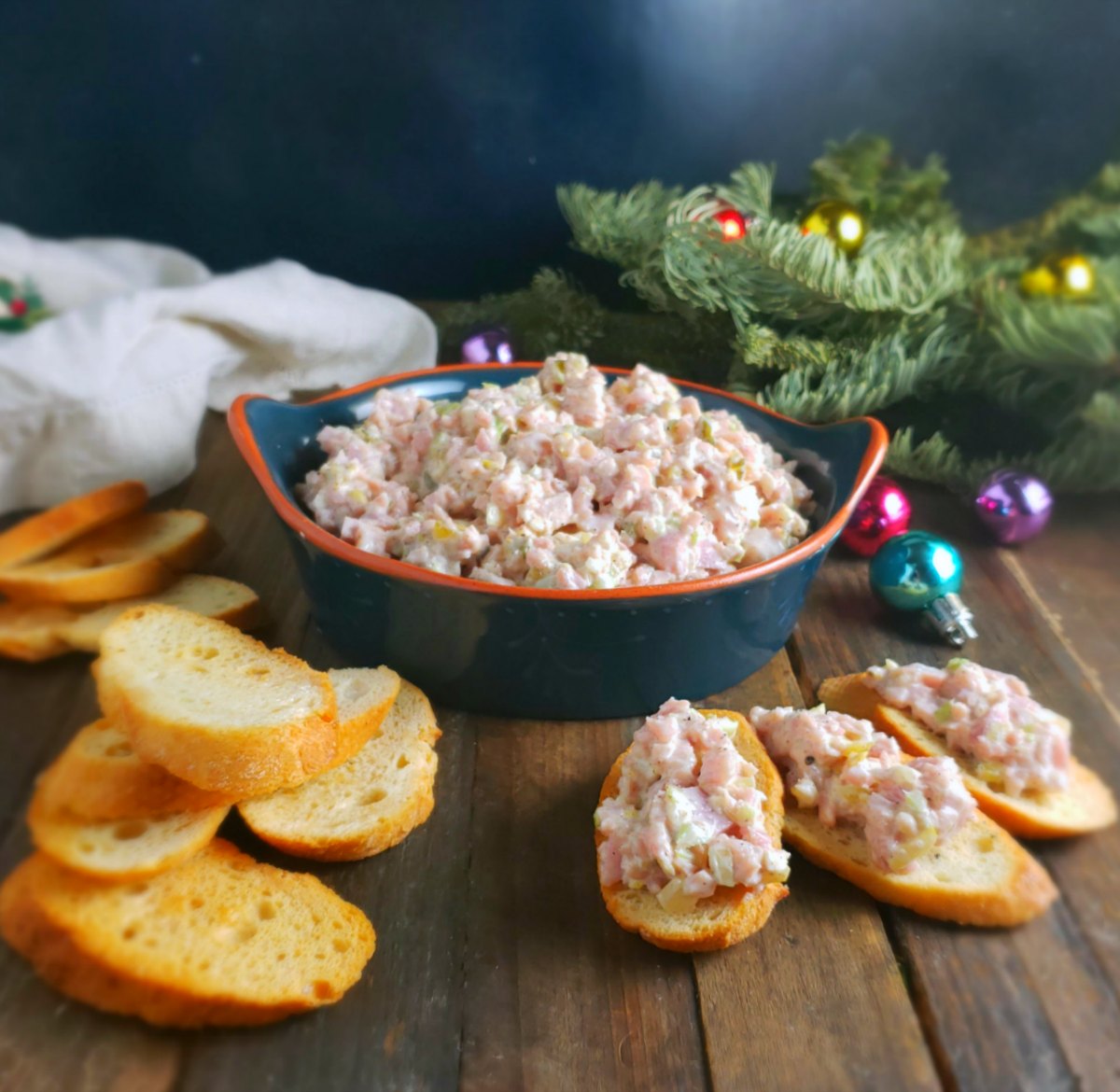 I just updated my Classic Ham Salad with new photos (and now new text) after I made it with the leftovers from my Pineapple Glazed Ham we had at Christmas. I posted the original out in August of 2016 during an epic heatwave when we were doing just about anything we could to keep cool.

Conclusion: Whether you’re serving this during the Dog Days of Summer, or after your Holiday ham (maybe for a New Year’s party?) you can’t go wrong with Classic Ham Salad.

This really is a classic recipe and I put it together just as I learned to make it way back in time; just like we had it when I was growing up in Iowa in the 1960s. I always understood it to have roots in Germany, although Wikipedia (sometimes ya gotta take them with a grain of salt) said it’s an Anglo American concoction. One thing they did get right was that ham salad is served on the Eastern Seaboard, throughout the South and in the Midwest, where I grew up.

Most ham salads are minced or ground ham (the food processor does a great job) with a little minced onion and celery, bound with mayo. I think it’s the classic spices of mustard and allspice that make the salad, and most Ham Salads have pickle relish, usually Sweet pickle. It’s a strange combo, especially if you didn’t grow up with it, but so absolutely divine. A lot of people confuse Ham Salad with Deviled Ham (see my recipe) and maybe Wikipedia did. Though both are made from Ham and both are spreads, they really are two different animals.

Serve your Ham Salad in sandwiches, lettuce cups or in the summer, fill a tomato. If you want to serve as appetizers, you can go with crackers or on toasts. For a lower-carb alternative, stuff a few veggies with it, especially mini bells. And if ya wanna go really old school, ya gotta go with stuffed celery sticks!

Making your own Ham Salad just couldn’t be faster or easier. I take the onion and celery for a spin in the food processor first, then add in the ham. Break it down into small bits and pieces, not so far that the pieces aren’t still distinct. And if you don’t have a food processor, just mince everything up by hand. Then stir in the rest of the ingredients by hand. I make sure not to dump the allspice and mustard powder in one place; instead, sprinkle it over and stir in.

I always start out with a half a cup of mayo, then add in the pickle relish to taste. Mix it and even if at that point you think it needs more mayo or anything else, if time allows, toss it in the fridge for an hour. Then take it out and adjust the flavors, the relish and decide if it needs a little more mayo. Ham can have different levels of moisture, so it’s going to be a judgment call on that mayo.

This salad is the perfect use for leftover ham. Keep in mind that any of these mixed Mayo salads can get a little watery the next day. Drain off the excess liquid and add a little more mayo to freshen them up. Leftovers are wonderful mixed with a little pasta and served chilled, kind of like Old Fashioned Tuna Macaroni Salad, only in a ham version.

I usually pick up several Hams during the holidays when they are dirt cheap & chuck in my freezer to bring out throughout the year. No matter when I have ham I’m eating one that is probably less than a dollar a pound. There are times I’ve looked at a ham steak in the store & that one little 1/2″ thick cut of meat has cost around the same as a half ham during Thanksgiving, Christmas, New Years or Easter seasons.

Condiments like mayo and relish are all best bought in the summer, especially during the holiday sales when they’re at their low for the year. If you miss those sales, you can stock up around the Superbowl when you’ll usually find a few great sales; not as good as those during the summer, but it’s likely the best sales you’ll see until summer.

I’ve compiled lists of what to look for on sale around each holiday and gathered them together on my post, Win at the Grocers. If you can get in the habit of taking advantage of pricing when it’s at the lowest and stock up then, you’ll eat better for less. And if you know what to look for on sale, when it’s likely to go on sale again, then you’ll have an idea when and how much to stock up on.

Mix all ingredients together. If time allows, refrigerate for an hour and once chilled, adjust the amounts of the spices, relish and mayo to taste. Serve in sandwiches, on toast, with crackers or fill vegetables like tomatoes, cherry tomatoes, mini bell peppers or stuff celery.

I’ll be linking up this week at our Throwback Thursday, Fiesta Friday & Saucy Saturdays.