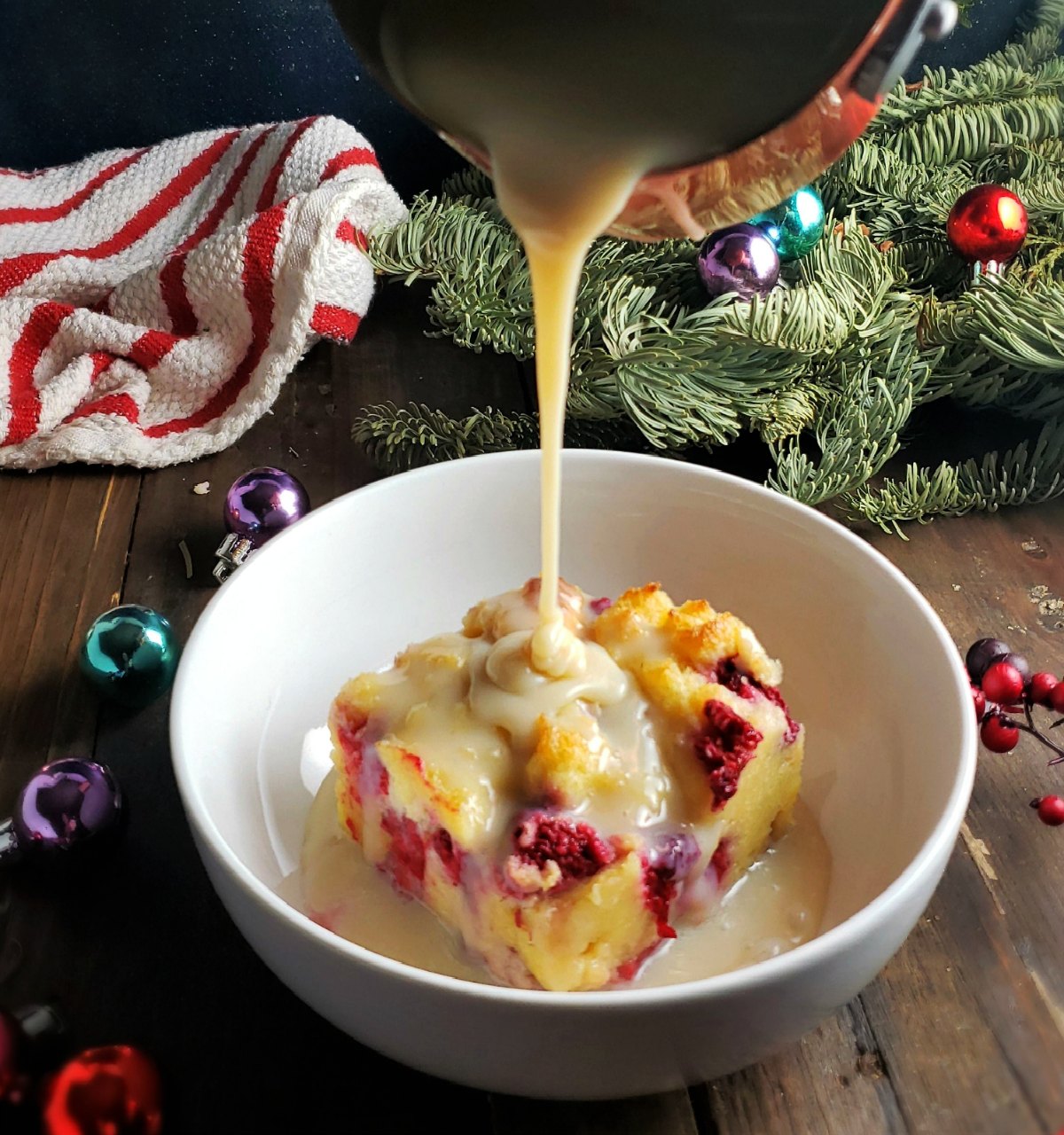 If you want to feel like you’ve died and gone to heaven, make this White Chocolate Raspberry Bread Pudding with Amaretto White Chocolate Sauce. Seriously. Well, maybe you’ll want to skip the “died” part and just have heaven on earth. This is a want to lick your plate clean dessert perfect for any special occasion and fabulous for a special holiday like Thanksgiving, Christmas or New Year’s Eve/Day.

Of course, if you have any leftover bread from any of those holidays, well maybe you’ve got another reason to make this later – kind of extend the holidays. But the bread here is a fraction of the recipe. As a matter of fact, there’s really very little bread in this bread pudding (the small amount is correct ) and it morphs almost into one creamy, custardy concoction.

Now there’s white chocolate, here, which some people find a bit cloying. but it’s cut in this recipe by the addition of tart raspberry, an idea from a friend. Goodness help me, I hate to tinker with a recipe from the famed Commander’s Palace in New Orleans, but that raspberry addition is a keeper. Plus it makes this bread pudding kinda festive! If you’d like to see the original recipe, you can find it on Epicurious.

But as good as the bread pudding is, there’s the sauce. Oh my. The sauce. You might think you don’t need it if you taste the bread pudding first, but you do. Yup, yup, yup! Trust me on this one. It’s not overkill (well maybe a little) but is an absolutely worthwhile addition to the dessert! And speaking of tinkering, I got a little inspired and added a touch of Amaretto to that sauce. Of course, if Amaretto isn’t your thing, try something else, Framboise, Frangelico, Orange Schnapps (really!) or anything that goes with Raspberries – or no alcohol at all if you prefer. You’ll know you hit the spot when people make little “happy” noises as they eat.

Now as I sit here typing, I’m asking myself – “Is all this raving a little cray cray? Is it really that good?” I start to wonder, “What if I’ve built this all up in my mind and then no one likes the recipe?” And then I take another bite and think, “Naaaawwww…” You’re going to love this. Everyone you serve it to is gonna love it. And you’re gonna be a hero for sure, for a long time. This dessert is that legendary!

This may not be the most “frugal” recipe ever, but one of my favorite times to serve this is to make it ahead and have it after an event; rather than going out after you hit a concert or the Christmas parade or whatever, have everyone over for this bread pudding and coffee. It’s likely less than going out; no need to mention that. 🙂

This recipe is absolutely easy and pretty straight forward but there is one little twist that truly makes the bread pudding outstanding; that is besides all the wonderful stuff in it! If you use a bread like the one below, a grocery bakery French loaf, you’ll start out with a one-pound loaf. To get the right amount of bread, trim it carefully removing as little crust as possible and you’ll end up with 8 to 10 ounces of cubes. Take some care cutting the cubes and get the right size; one inch is pretty small. A serrated knife helps. Add the cubes to a buttered casserole.

The custard’s easy, but here’s that twist: half the custard is added to the bread cubes in the casserole and the cubes gently pressed down, then there’s a 15-minute wait before the rest is added in. Don’t go less time and don’t go longer. That’s going to give this bread pudding an amazing texture throughout, and especially on the top; it really does make a difference in the finished bread pudding when the step is followed correctly.

Immediately sprinkle the raspberries over the top and fold them in very gently. It might seem as if there are too many raspberries, but trust me, there’s not! Try to distribute them throughout, gently and it’s ok if some sit on top. Give the top a light sprinkle with granulated sugar, just to ensure the top will crisp and those raspberries are protected, cover with buttered or sprayed foil and bake in a water bath as directed.

The size and shape of the casserole and how your oven runs might make the length of time vary. Just uncover at 55 minutes, start with the directed additional 15 minutes and then watch it like a hawk after that. You’re looking for it to be very lightly golden brown on the top and when touched to have some firmness. There will be some give but it shouldn’t feel “liquidy.”

Let it cool to warm before serving; it will be soft and squishy and wonderful or refrigerate and serve cold or much better, gently reheat and it will be firm enough to hold it’s shape but still be ethereally soft.

So you might save a smidge by using leftover bread, the real cost of this recipe is the cream, the white chocolate, and the berries. Shop well for those items and you can bring this home for a fraction of the cost of just buying the ingredients “off the shelf” so to speak.

There’s no doubt the holidays are the best time to pick up baking goods like the white chocolate (try to get a good brand, though, it makes a difference) so pick them up at a low during the Winter Holidays and/or Easter season and use them all year round.

Cream, too, will be on sale during those holidays and almost any holiday year ’round. Watch for it, pick it up (it keeps for weeks with its high-fat content) and use it as needed. Aldi has great prices on cream that rival the best grocery sales prices and Costco is almost as good, but you’ll need to buy larger containers. If half and half is at a much better price, you can use one pint (2 cups half and half) and 1 1/2 cups of cream. You’ll need to have an use for that extra 1/2 cup of cream or any savings will be lost. You’ll need a use for all those egg whites, too. See my post on 75 Ways to Use Leftover Egg Whites, and I go into measuring them by the cup and storing, too.

Frozen raspberries are just fine in this bread pudding; check for them at a low right after the fresh berry season when warehouses are full and products are priced to sell, mid to late summer, and during holiday sales. Fresh berries are even better if you can get them. Again, watch sales, pick up fresh berries prior to most holidays; frozen are often on sale then, too, but watch also and stock up during late summer after the season is over; the warehouses are full and product priced to move.

Arrange bread cubes on two baking sheets. Bake until light golden and dry, about 10 minutes, stirring if necessary. Cool bread completely. Increase oven temperature to 350°F. An easy alternative is to prepare bread the night before, spread out on a tray and leave out or place in a cupboard to air dry.

Prepare a water bath: Find a pan or roaster large enough to accommodate the casserole the bread pudding will be baked in and bring a pot of water to a boil. Butter the casserole dish.

Place the pan with the bread pudding in the larger pan and add enough boiling water to come half-way up the side. Place in oven.

Bake pudding about 55 minutes. Uncover and bake until top is golden brown, about 15 minutes longer. Don’t bake until “crunchy” just until lightly colored and the pudding is slightly firm to the touch. The total baking pan may vary in different ovens and using different casseroles. If not done in 15 minutes, watch closely.

Transfer pudding to rack and cool slightly. (Can be prepared 1 day ahead. Cover with foil and refrigerate. Rewarm covered pudding in 350°F oven for 30 minutes before serving or if desired, the chilled pudding may be cut into neat squares and warmed slightly in the microwave. The consistency of the warm pudding will be very soft and scoopable, unable to be cut.)

Note: the white chocolate sauce may be made with a tablespoon of vanilla, but add two tablespoons of milk if the substitution is made.

I have been having a lot of fun experimenting with my Dad’s good camera! The photo is the glass dish were from his good Nikon, the others from my point and shoot. I can see a huge difference in quality, but need to experiment more with settings and figure out the lighting with the good camera – it is so much easier to get better “in perspective” photos with the big camera.

I’ll be bringing this White Chocolate Bread Pudding with Amaretto White Chocolate Sauce to Throwback Thursday (I am so happy to be a co-host – yay!) and Fiesta Friday this week – FF is hosted by two of my favorite bloggers, Johanne@French Gardener Dishes and Liz@spades, spatulas & spoons.