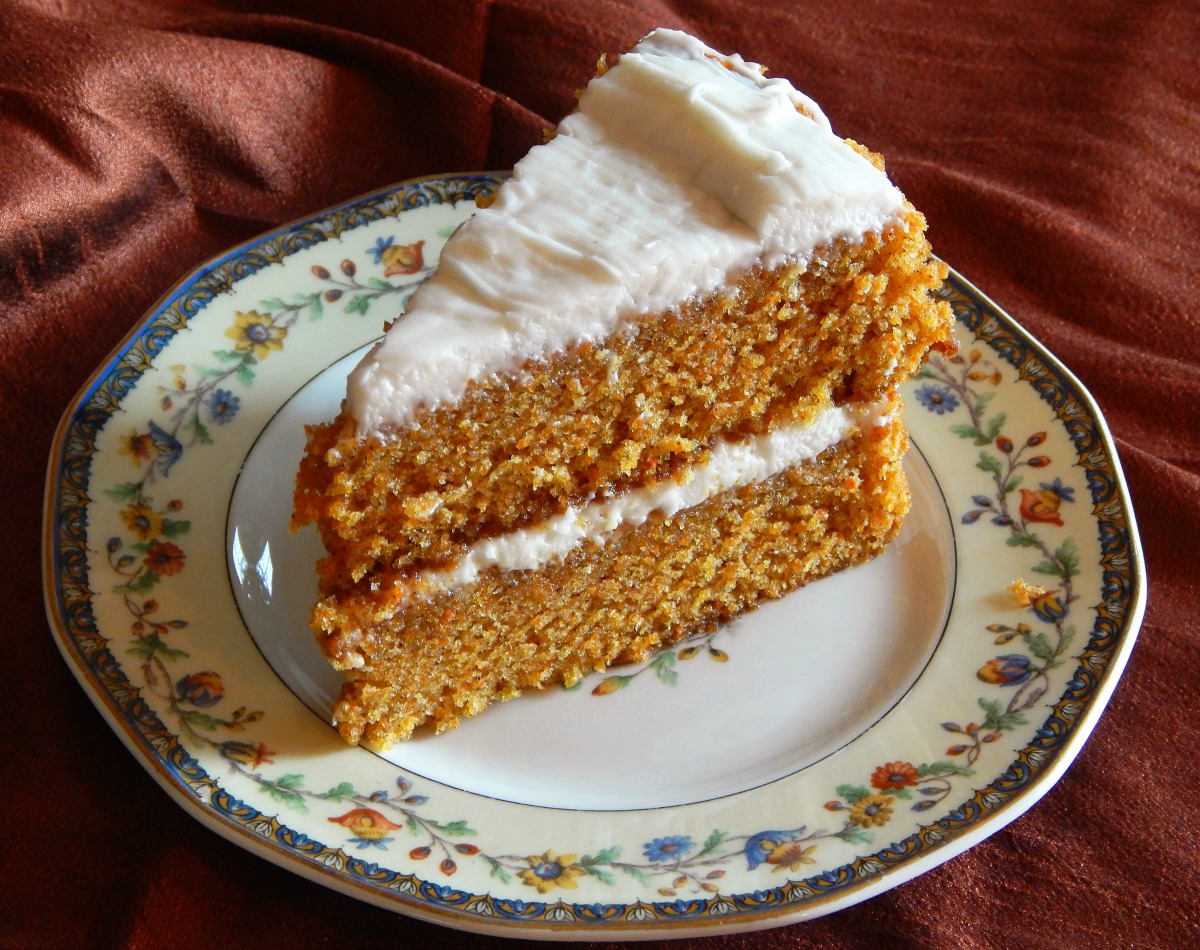 I haven’t been posting much on this blog; I stopped in to see my Dad, Chuck and Step Mom, Pat, in early June and basically never left…so for this summer at least, I’ve traded in my city life in the Twin Cities for a small town in South Dakota. Quite a shocker but we’re making do and working things through and having a pretty good time as we do so.

We’ve been swapping family stories and pulling out a recipe now and then from Pat’s extensive collection. She’s a great cook, which she always denies and she can afford that modesty – her food stands on it’s own.

This recipe was labeled Wayside Inn Carrot cake and apparently Pat’s been making this for decades – for everyone but me! My sister and neighbors have raved about it. We decided to make it recently for a block party – it was a team effort; even my Dad pitched in to peel the carrots and do the dishes.

My folks with the Wayside Inn Carrot Cake

That cake was doomed to a premature demise – Gibson, my “laprador,” a notorious counter cruiser, gave it his seal of approval. Some of you might remember he got into my Lemon Meringue Pie this Easter and finished off my Ballymaloe’s Soda Bread around St. Pat’s.

Here at the folk’s, he’s finished off countless loaves of bread, 1/2 of a giant box of Milk Bones, all but three of my Twice Baked Potatoes (twice!) plus part of a giant, iced chocolate chip cookie (those are just the highlights) and worst of all, ate a corn cob out of the garbage which ended in very serious surgery last month.

Gibson, who proved to be amazingly agile – nabbing food even with the cone

We know Gibson was the cake culprit, not the folk’s Golden Retriever, Cody, because:

So today, I’m presenting you with round two of the Wayside Inn Carrot Cake, hopefully destined for human consumption, only. Now that I’ve had a chance to sample it, let me tell you about it. It’s a bit more cakelike than some carrot cakes, light, moist, mildly flavored and gently spiced. There’s no denseness or oiliness to this cake; it has a rather fine texture and is every bit as good as my sister claimed.

In this cake the carrots were grated very finely using the chopping blade of the food processor, not the shredding discs, until it was nearly a puree. If you don’t have a food processor, for the same beautiful, light texture, use a fine grater or substitute 2 jars of “Junior” baby food carrots like another version on So Does That Mean I’m Southern?

That same blog gives a variation for baking in an angel food cake pan or as a sheet cake, and while I’m usually game to make any sheet cake (I love both my Banana Sheet Cake and my Old Fashioned Texas Sheet Cake) today it’s all about family traditions, new and old. Here’s how Pat presents hers (and she doesn’t use the coconut or the nuts) as a beautiful layered cake. I hope you enjoy it as much as we (and Gibson) did!

Sift or whisk together flour, sugar, cinnamon, baking powder, soda and salt in the bowl of an electric mixer. Add oil and beat two minutes, starting at medium speed, increasing to high, and scraping down the sides of bowl several times. Add eggs and vanilla and beat two minues more, scraping several times. Fold in carrots (and pecans, if using) by hand.

Divide batter between two pans. Bake until tester comes out clean, about 40 to 50 minutes. Let cool 25 minutes, then turn out on a rack to cool completely.

In a small bowl, combine cream cheese, cream, vanilla and salt and beat until consisteny of very soft paste, about five to seven minutes. Gradually add sugar, one cup at a time, blending well after each addition. Stir in pecans and coconut (if using.)

Spread icing over top (not sides) of each cake and stack. Transfer to serving platter.

I’m taking this cake to Fiesta Friday, an ongoing blogger’s event where bloggers “bring” their best dishes for this weekly event and it’s a great way to show off a bit 🙂 and see a lot of different dishes and recipes. This week, it’s co-hosted by Jhuls of the Not So Creative Cook and Elaine of Foodbod.