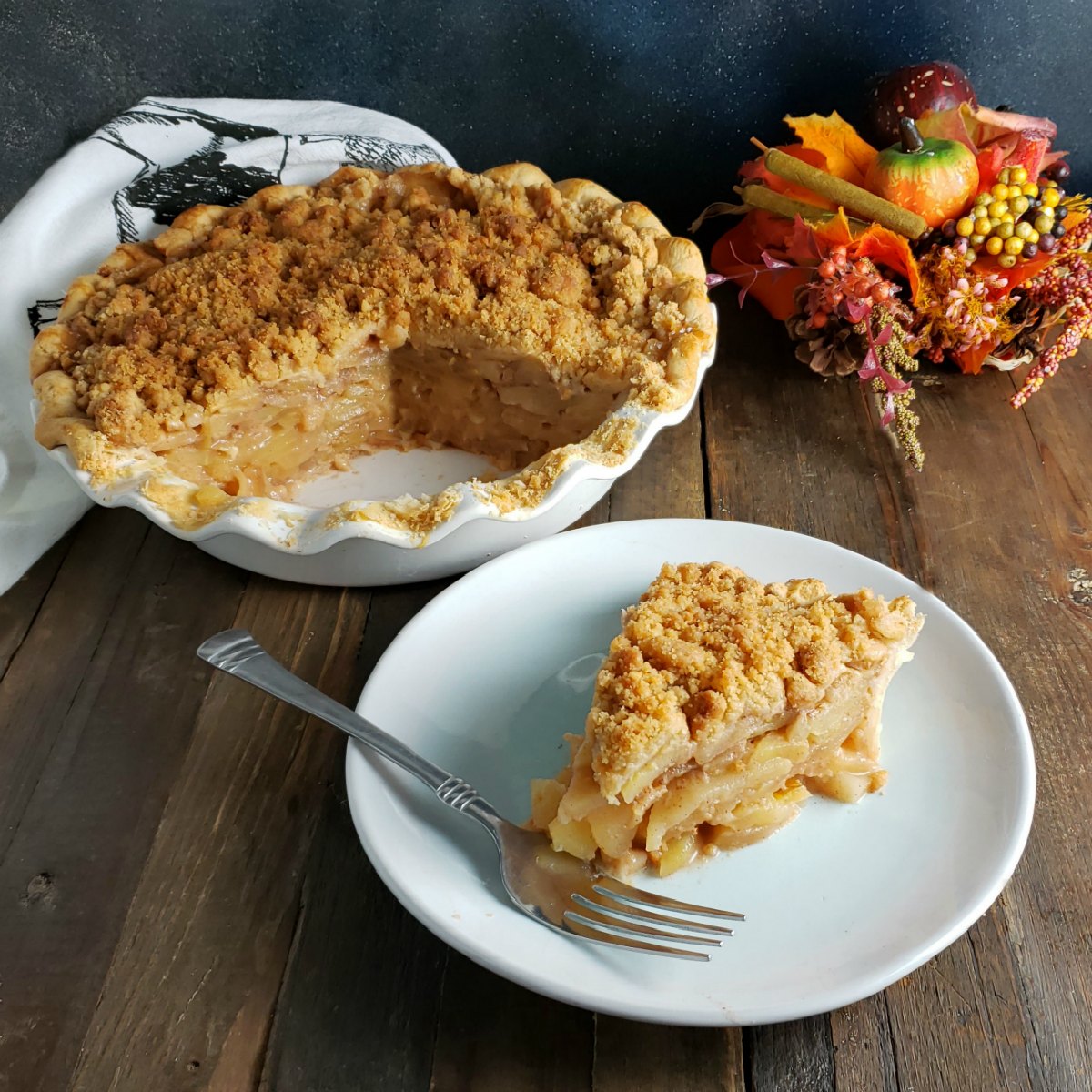 I know I’ve been gone for a while (I moved to Atlanta in September & it took a while to find my feet!) but I’m back. And look, I bought pie, figuratively speaking of course! If you’re looking for a knockout pie for the holidays (or just about anytime) that still has some down-home flair, you just can’t go wrong with a Pennsylvania Dutch Apple Pie. It’s really one of my fave apple pies (ok, I have two favorites, this one and a caramelly one that I’ll post sometime) from the crispy, crunchy streusel on top down to the layer upon layer of tart, creamy, dreamy apples.

And while I love this pie for its flavor and marvelous texture, another thing I love about it (and I wouldn’t tell this to just everyone – except now I am, lol) is that it’s a bit of a cheat. It’s easy to knock out a gorgeous looking Pennsylvania Dutch Pie in no time, even if you have no particular skills because there’s no detail work like fitting on a top crust or heaven forbid, doing a lattice! As long as you can manage that bottom crust, either homemade or store-bought, which barely shows anyway, you’re golden. So if you’ve ever shied away from pie-making, now you, too, can be a pie-making fool!

Mostly, though it’s the flavor of this pie that I love. Like so many old-fashioned pies, this one really lets the flavor of apple shine through without a lot of spicing to speak of. I always wondered if that was because way back in the day, spices, even ones we take for granted, like cinnamon, were dear and not to be used extravagantly. (If you know you like pies with more spice, feel free to riff.)

Regardless, this apple pie has one thing that a lot of pies, but very few apple ones have. A touch of cream. It all melds together into something glorious. The streusel on the top is outstanding, so you almost have to picture yourself cutting into this pie, feeling, and hearing the crunch of the streusel giving away to those creamy apple layers.

You know that streusel is a little pebbly, crisp and light, and just a little sandy, and it scatters a bit as you cut. It’s the perfect contrast to the filling. It really elevates the whole pie and the filling is better for having the streusel. Streusel may be an easy topping, but it’s no less delicious for all of that.

This is the perfect pie to not work too hard on. There are a few stages (and a lot of time) but no worries, it’s all easy. Allow time for preparing a ton of apples (and letting them sit for a while in cream & spices) and the chilling of the crust after making and before filling, and chilling the streusel. You’re gonna want to allow the finished pie to sit at least four hours and preferably overnight for best slicing, too.

I really recommend this cream cheese pie crust from Bon Appetit; It’s made in a food processor and a Ziploc bag. You can make the pie crust up to two days ahead. Check out the link for the same pie crust made in different sizes or for directions to make completely by hand.

You can use any pie crust you’d like, though, for this pie, even store-bought. Just know this is a deep-dish pie so you can choose an appropriate size recipe.

I like a good tart apple for any baking, and Granny Smith is usually my “go-to.” They’re readily available, inexpensive, nice and sturdy, and easy to peel and slice. But any good baking apple like Honeycrisp, McIntosh, Golden Delicious, or Jonagold will do, along with a score of others. And of course, you can use a mix of apples, too.

In this recipe the apples are peeled and sliced thinly (1/4″) and then sit for an hour or two, soaking up and softening in a mixture of cream and spices. I love to use my crank apple peeler/slicer gadget but I have found that if you aren’t opposed to the extra work, cutting the “cheeks” off the apples and making half-moon slices (as opposed to half-moon slices with a circle from the core like you get from the crank peeler/slicer) it makes for the most cohesive finished pie.

The Streusel Topping is fast and easy since it’s made with melted butter. I like to toss it in the fridge for a while and it bakes up better. It can be knocked out several days ahead of time but you’ll want it refrigerated for at least 30 minutes.

Keep in mind that when you make a streusel topping unless you weigh the ingredients. you’ll want to test it. Give a bit of it a good squeeze and if it holds together, you’re golden. If it’s too crumbly, work with it a little more and if needed add just a teensy bit more butter.

If you want this to look like a showstopper for a feast like Thanksgiving or Christmas or a dinner party, make this pie the day before; it benefits from some sit time; the layers become more cohesive and it slices beautifully. I don’t refrigerate it, just lightly cover after it’s cool (so the streusel doesn’t get soggy) and let it sit overnight on the counter.

I have found that after it’s cool and set, a short stint in the microwave to heat an individual slice doesn’t seem to do any harm, though. Especially at midnight…if you have any left. 🙂 If you’d like to check out any of my other pies & tarts, here’s a link to the menu.

For the Streusel Topping:

May be made up 45 minutes to 2 days ahead and is best made at least the night before.

Place the flour mixture in a food processor with the metal blade and process for a few seconds to combine. Set the bag aside. Cut the cream cheese into 3 or 4 pieces and add it to the flour. Process for about 20 seconds or until the mixture resembles coarse meal. Add the frozen butter and pulse until none of the butter is larger than the size of a pea. (Toss with a fork to see.) Remove the cover and add the water and vinegar. Pulse until most of the butter is reduced to the size of small peas. The mixture will be in particles and will not hold together. Spoon it into the plastic bag.

Holding the bag opening together with one hand, knead the mixture by pressing from the outside with the knuckles and heels of your hands, alternatively until the mixture holds together in one piece and feels slightly stretchy when pulled. Wrap the dough with the plastic wrap, flatten it into a disc and refrigerate for at least 45 minutes, preferably overnight.

Add apples (and raisins if using) to a large bowl and toss with the cream, sugar, lemon juice, vanilla, cinnamon, and salt until apples are evenly coated. Let sit at room temperature for at least 1 hour or up to 2 hours.

For the Streusel Topping:

Stir all ingredients in bowl until no dry spots remain and mixture forms clumps. Refrigerate until ready to use.

Adjust oven rack to lower-middle and heat oven to 350 degrees F. Let chilled dough sit on counter to soften slightly, about 10 minutes. Roll dough into a 12-inch circle on a lightly floured counter. Loosely roll dough around rolling pin and gently unroll it onto a 9-inch pie plate, letting excess dough hang over edge. Ease dough into plate by gently lifting edge of dough with your hand while pressing into plate bottom with your other hand.

Trim overhang to 1/2″ beyond lip of plate. Tuck overhang under itself; folded edge should be flush with edge of plate. Crimp dough evenly around edge of plate using your fingers. Wrap dough-lined plate loosely in plastic and refrigerate until dough is firm, at least 30 minutes.

Place dough-lined plate on parchment or foil-lined (for easy clean up) rimmed baking sheet. Working with 1 large handful at a time, distribute apple mixture in plate, lightly pressing into even layer and filling in gaps before adding more. Take care not to mound apple mixture in center of plate. Pour the liquid from bowl into pie, up to 2/3 cup.

Break topping (it will harden in refrigerator) into pea-size crumbs and distribute evenly over apple mixture. Pat topping lightly to adhere.

Bake pie on sheet until top is golden brown and paring knife inserted in center meets no resistance, about 1 hour 10 minutes, rotating sheet halfway through baking. Let pie cool on wire rack for at least 4 hours or preferably overnight. Serve.