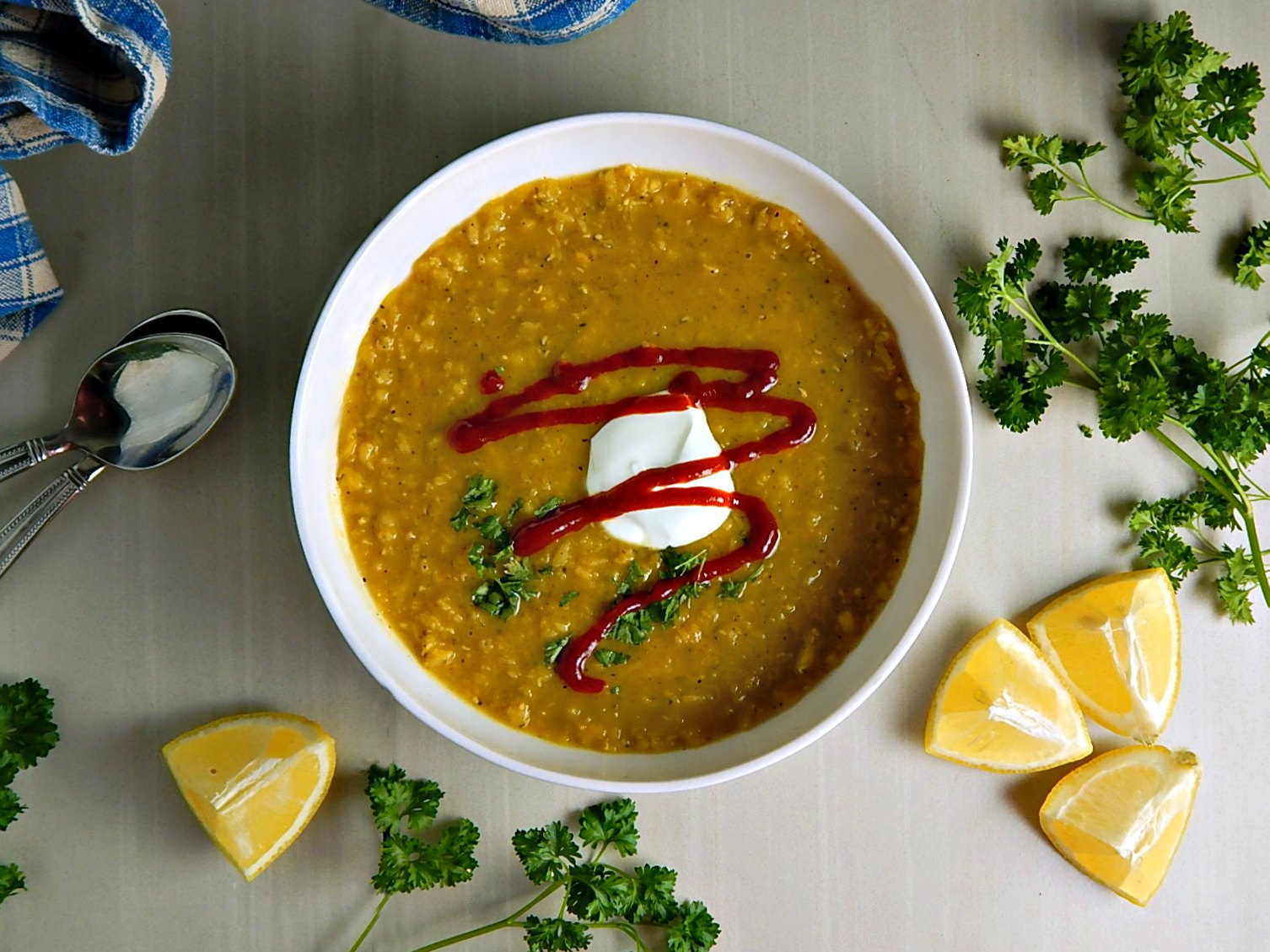 I’ve been meaning to post Naf Naf Lentil Soup for a while, but today I was inspired because it has to be the perfect after tax day soup – especially if you’re not getting a refund! Made in minutes with a handful of ingredients, it’s not only absolutely delish, it’s downright cheap to make. It’s modeled after the soup at the fast-casual restaurant, Naf Naf Middle Eastern Grill. I had to stop in a while back to try their Chicken Shawarma, but it was the Lentil Soup that blew me away!

Naf Naf’s Shawarma was good, but not good enough to keep me coming back (especially since I have a Homestyle Chicken Shawarma on my site) but that soup. Oh my gosh, I am wild about it. I love it. I crave it. I can’t get enough of it (luckily it’s super healthy) and I want it all the time.

So that day was a game-changer for me. If you follow me, you know It’s no secret I love me some Soup, Chowder & Chili and I love this Thai Red Lentil Soup with Coconut & Curry, too. But the Naf Naf Lentil Soup is a whole different animal with a completely different flavor profile. It has just a bit of spice, a bit of curry and touch of cayenne; it’s not hot by any means but does have a little “personality” as my Dad would say. I like it just as is, with a squeeze of lemon. You might like a dash or two of hot sauce if you lean that way. Or you might like a dab of yogurt on top or maybe you’d like to swirl in a little of the Middle Eastern spicy herb sauce, Zhug.

I’m no expert at anything, let alone the huge range and complexities of Middle Eastern flavors, so I googled and read and tried many different recipes in order to copycat this Naf Naf Lentil Soup. A lot of them were more complex but I think the key to the Naf Naf Lentil Soup is it is simple, easy to make and the flavor is (to steal a line from DDD) out of bounds. I relied a lot on a recipe on Hardly Housewives, really just changing the amounts of liquid, the timing and tweaking the spices just a bit. I think I’m pretty close to the taste of the original, using the lentils I’m able to buy here, the red lentils; it certainly isn’t as pretty as Naf Naf’s soup.

You’ll probably want to serve your Naf Naf Lentil Soup with some type of flatbread, pita or maybe Naan, just to fill out the meal. Check the store if you don’t make your own, or check with any Indian or Middle Eastern restaurant; some will sell packages for a pittance and you might get a much better bargain and much fresher bread than you will at the grocery store.

You’re going to have this soup made in 25 minutes or so. I actually did a trial (because there is no such thing as too much of this lentil soup) one pot of soup on the stove and the other in the Instant Pot. The IP saved me about five minutes but I like being able, in this case, to watch the soup as it gets to the end so I can adjust the flavors, the liquid and get the lentils just how I like them.

My preference is for the lentils to be soft but just a bit distinct and the soup to have enough liquid to be soupy rather than more like porridge or stew. You can adjust that to your taste. And watch the salt; while I think this soup is great just a bit on the salty side, the chicken broth you use might be a little salty on its own. Don’t add any more salt until after you’ve added a good squeeze of lemon. That lemon will brighten this soup and you may found that with the acid from the lemon, you can get by with less salt than you might think.

I like this soup best with plain old grocery store yellow curry powder; the flavors really are on the simple side both at the restaurant and in this recipe. Upgrade that with a fancier curry if you’d like. If you think you might use it again, Sumac, a spice found in Middle Eastern cooking (and an ingredient used in my Ras el Hanout Spice blend) is a worthwhile add – it nudged the soup just slightly in the right direction, but I actually made and loved this soup before I thought to add a 1/4 teaspoon of sumac. I wouldn’t buy a whole jar of Sumac just for this small amount in the recipe, though. Use it if you have it.

Lentils, like most beans and legumes, are so cheap and so good for you, they’re really a bargain. These are the merry little red lentils (which are really orange…don’t ask!) although you can’t tell it from the color of the soup. I can’t really find the yellow lentils in my area. Check in the bag and the bulk aisles for the best pricing.

Lentils with their high fiber content, help lower cholesterol, stabilize blood sugar and according to the World’s Healthiest Foods, have significant amounts of magnesium and folate. Read more about the health benefits at WHF. (I’m going to stop and give a shout out to one of my favorite and one of the most homely dips in the world, Red Lentil Dip with a Spanish Flair. You gotta try that if you love lentils, and even if you don’t.)

You can really use any kind of stock you wish in this soup; I prefer chicken stock (of course, use vegetable stock if you’re going meatless) and love to use my Homemade Turkey or Chicken Stock, and that puts this soup on the table for just pennies a serving. Use what you wish, though. I could never make enough chicken stock to get me through the amount I use, but I do watch for the big sales on it around the Lent and Easter sales and the Winter Holidays. You’ll pay about half price if you stock up then, but if you don’t catch those sales, check out Aldi or your buyer’s club.

I think you’re gonna love this simple, fast lentil soup, a copycat version of Naf Naf’s Lentil Soup – on the table in less than 30 minutes!

Heat olive oil in a Dutch oven, add onion and saute until softened, about five to six minutes. Add garlic, curry powder, cumin, cayenne, and sumac, if using, and stir until fragrant, being careful not to burn.

Add a little of the stock, a cup and a half or so, and stir together, then stir in the remainder of the stock. Add in the lentils, bring to a boil, reduce to a good simmer. Cook, stirring now and then until lentils are at the desired stage of doneness, 15 to 25 minutes, depending on whether you wish them to be soft and distinct or very soft and almost dissolved.

Add the squeeze of lemon, salt to taste and garnish with lemon, cilantro or parsley. Serve with a little yogurt or Zhoug if desired.

Use 10 cups of stock, then adjust as needed when finished.

If you decide to use the IP, use the Saute function, add the oil, then the onion and saute until softened, five to six minutes. Add the garlic, then measure out and add all at once the spices, the curry powder, onion, cayenne, and sumac. Add a little of the stock, a cup and a half or so, and stir together, then stir in the remainder of the stock for 10 cups total. Add in the lentils, seaL and set to Pressure, High for five minutes. When finished use a quick release, stopping for a minute if anything else other than steam is coming out of the valve, then resume the release. Use the saute function to simmer to desired consistency and adjust seasonings and liquids as desired.

Add the squeeze of lemon, salt to taste and garnish with lemon, cilantro or parsley. Serve with a little yogurt or Zhoug if desired.