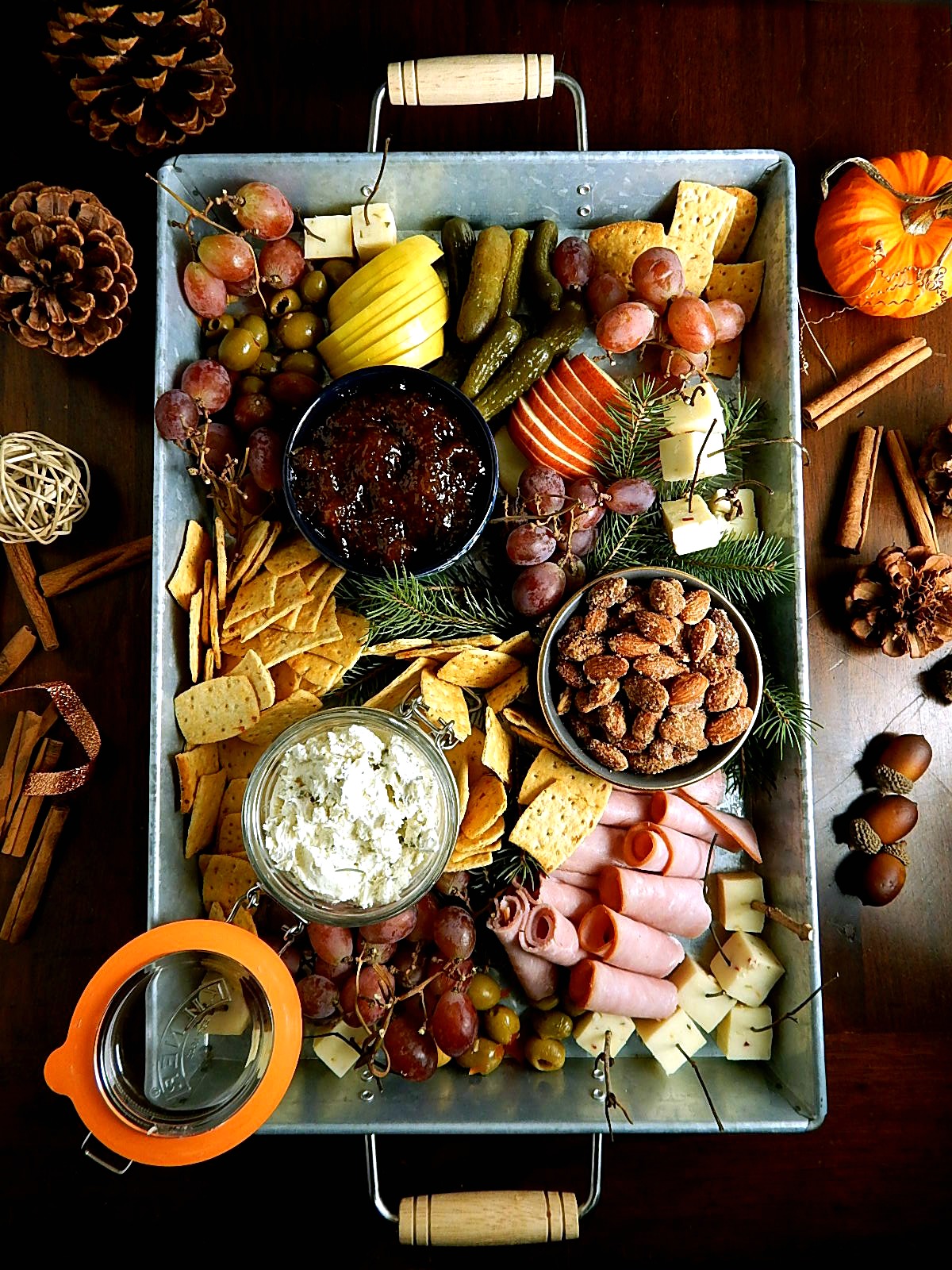 When the holidays roll around and you’re asked to a party, do you usually say, “What can I bring?” And what if you don’t usually cook, or can’t cook. And maybe your budget is overextended as it is. That’s when you might think Party Tray. And if you know how to assemble a Cheap Holiday Party Tray, all your problems are solved. At least the “what to bring” option is.

I broke my foot years ago right before the holidays. The Doc thought it was a sprain and didn’t even give me a brace. Told me to get crutches at Walmart. What a mess. Of course, I couldn’t stand. I couldn’t cook, So when it came time to go to a party, the first thing that entered my mind to pick up a premade tray at the store. It had no price. That sucker (below is an identical one) was 26 bucks at the checkout! And there I was in the stupid little electric cart with the crutches hanging out still facing the ordeal of getting through the snow to the car and to the party. And goodness help me. I bought it. Never again!!

About A Cheap Holiday Party Tray:

So that got me thinking about how to put together a cheese or party tray on a budget. Something that looked marvelous, maybe even looked a little high end. The kind of thing that no one would even guess wasn’t expensive because they’re just interested in eating it, and they’re eating with their eyes first. I wanted it to be something that might be a great alternative to the fancy cheese trays that are so popular now.

Just because your Party Tray is done on a budget doesn’t mean it can’t be fun, trendy, and gorgeous. I don’t think anybody would look at this Cheap Holiday Party Tray and think it was made on a budget. Unless they’re one of those people that love parties so they can go right to the Shrimp Cocktail. They might notice the distinct lack of shrimp, lol!

What Should Be On A Great Cheap Holiday Party Tray:

Of course, you’re going to want something on the tray for everyone, coz you never know who’s going to show up at your party. Low Carb, Vegan, Vegetarian, Gluten Free, Paleo, Keto and so on. It’s easy to tweak a bit for special diets or at least add in a few options so people can pick and choose. Plus a lot of variety seems “richer.” But don’t go too overboard which can make your Cheap Holiday Party Tray seem messy.

Speaking of messy, choose items that can be easily handled, items that won’t bleed into other items or could easily spill or crunch in a way that would spew food on your guests. And don’t include items on your party tray that have to be kept hot and nothing that has to be kept absolutely cold.

I like to think about the “elements” that go into a Party Tray and choose and choose them all or choose a few “key” categories. And when making a Cheap Holiday Party Tray, keep in mind the less expensive options in each category. If you’re not on a budget, of course, the sky is the limit. I think it might be worth a mention if you have a well stocked fridge and pantry, you might be able to put together this tray just on what you have on hand. That’s great for an impromptu party or drop in guests or a last-minute invitation.

Choosing the Elements for the Cheap Holiday Party Tray:

On any platter or party tray, there should be one “star” of the show. Everything else will be chosen to coordinate or mix and match with that feature item. In my Cheap Holiday Party Tray, it’s my Easy Homemade Boursin Cheese. That Boursin Cheese stands in for one of the cheeses and one of the spreads listed in the elements above. It’s an inexpensive alternative to a block of cheese.

Your feature item can be all kinds of things. Take a look at my Appetizer Menu and focus on the Dips and Spreads. It could be Hummus or the Pub Cheese or something unusual like my Red Lentil Dip with a Spanish Flair or fancy like one of the Crab Dips or Smoked Salmon Spread. It could even be something like Classic Deviled Ham or an Old Fashioned Chicken Salad. Then it can stand in for the meat and one of the spread elements.

And while the feature item is the star of the show, another thing that keeps this platter from seeming ho-hum and run of the mill is that for my Snack element, I made my Sweet Spicy Slow Cooker Nuts. I think of this as the secondary star of the show. It could have been pretzels or beer nuts, for that matter but I think having a second item that seems “fancy” kind of makes the platter.

That secondary item could be drawn from any of the “elements” above, for instance, you could make a fancy cracker instead of serving store-bought or make a special sweet spread or your own homemade deer sausage instead of lunch meat. Maybe you want pickled asparagus instead of gherkins. When you have one or two items that seem “fancier” it elevates the whole shebang. And then the rest can be just ordinary mundane items and no one will really notice.

For the actual assembly, it’s nice to have three elements that stand out and catch the eye. Three is the magic number that appears so often in design. It’s called “The Rule of Three.” In my Cheap Holiday Platter, I have three main elements, the three containers that are just about the same size, but one is the “focal point”. That’s my Easy Homemade Boursin Cheese.  (Can you tell I REALLY like that cheese?) The other two items are my Sweet Spicy Slow Cooker Nuts and a Fig Spread I bought at the store. Place your three main elements in a triangular pattern of some sort then start filling in. Keep in mind that you probably want your meat to not touch the cheese for the vegetarians. And you don’t want wet items like pickles and olives to sidle up to your dry crackers.

It’s nice to have a “fill-in” item that kind of unites the party tray in the same way a string of lights does on a Christmas Tree. A lot of party trays use Rosemary but honestly, it flavors everything it touches and it’s pricey in the winter. I just went outside and got a little greenery the day before and washed it as best I could. It also serves to divide certain elements so they aren’t touching.

Other than that, I think it’s nice to think of the textures and colors in the party tray and divide everything into little piles, spreading those smaller groupings around. You probably don’t want one large pile of crackers, one large pile of grapes. or all white items on one side, red items on the other. Spread the textures and colors around, but do keep in mind that too many small piles will look cluttery. Limit yourself to a few. And try to fill in without too many blank spaces. I should have had more of the ham on my tray, for instance, and maybe a few more crackers in the corner with grapes, maybe just a little more cheese opposite the ham. But if in doubt of how your platter looks – take a quick picture. You’ll notice areas that need improvement more in a photo than by just “eyeing” it.

I always think it’s a great idea to put smaller amounts of items on my Cheap Holiday Party Tray and have more of those items handy to replenish as needed. I think it looks better and there’s also a psychological component – when the amounts are smaller portions, people tend to think that what they are eating is “special” and generally slow down, choose just a few items and savor them. (Think haute cuisine.) Having a few items for your guests to assemble does the same thing. You’ll notice that I’ve taken advantage of both of those hints.

I also chose to use a store brand cracker (who will know?) and common fruits, apples & grapes. Cut your apples “fancy” and put a little lemon juice or real lemon on apple slices or on any other fruit that could discolor. Wash fruit well ahead so it isn’t watery when it goes on your tray. Snip grapes into little clusters of a few grapes each.

I raided my fridge, first for the olives and pickles and assessed what else was in there and in my pantry in case I needed more. Drain items like that well in a small strainer over a bowl and then pour the brine back in the jars. If you have any leftover, they can be put back in the brine. Frankly, it can be a relief to make some good use of all the relish items cluttering up your fridge door shelves and your Cheap Holiday Party Platter is just the place to do it!

And I cut my basic grocery store cubes just like they do at Costco, lol! I continued the nature theme I kind of started with the evergreen branches and chose to use little sticks (again, washed the day before) instead of toothpicks. I do wish I would have gotten bigger little branches that were more proportional. And I continued that theme with a few natural elements around my Cheap Holiday Party Tray.

Decide how much you need for your Cheap Holiday Party Tray by how many people you’ll be serving, what else is served and time of day. Know your guests, too. If you invite my son, for instance, make one tray for him and one for everyone else. Just kidding, Kraig! If the party is in the early afternoon, you’re between lunch and dinner your guests may not want as much. If the party is after dinner, the same. If you are making a predinner party platter when you’re serving dinner, again you may not need a huge amount. But if your party is late afternoon or a cocktail party and replacing dinner, expect to load up your tray accordingly, depending on what else is served.

Plan on two to three ounces of meat per person, an ounce or two of cheese, 1/4 cup per person of the spreads, about 4 relishes per person and a half a cup of fruit or vegetables. And of course, have plenty of crackers and/or bread, too.

I hope you’ve found some inspiration here to make your own Cheap Holiday Party Tray, no matter what Holiday you are celebrating this year! And be safe if you’re driving. And Happy Holidays to all!