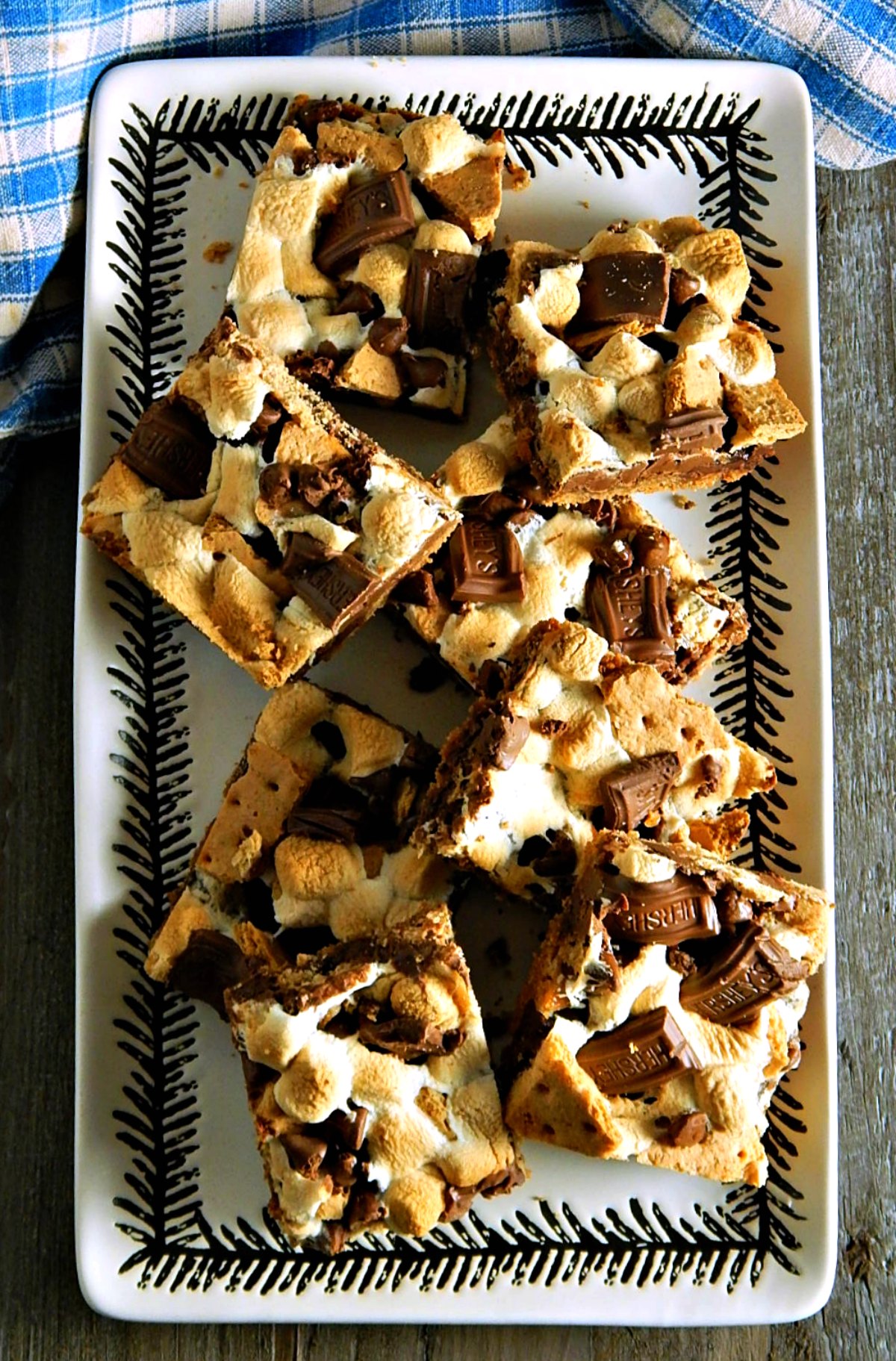 I’ve been kicking the idea of S’mores Bars around for a long time. Actually, years ago, I used to make some that had Golden Graham Cereal and they were really fun. Maybe that will be a post someday. But today, I wanted my Best Easy S’mores Bars to be graham crackers and chocolate and marshmallows, just like a real S’more.

And I wanted The Best Easy S’mores Bars to be loaded to the hilt with ooey gooey deliciousness with a little of the crispiness of the graham crackers. And I wanted them very easy to make. Like drop dead simple. So anyone can make them at the drop of a hat!

About The Best Easy S’mores Bars:

I first came across a recipe for S’more Bars using a chocolate chip cookie base, and it looked outstanding. I ultimately decided to build my Best Easy S’mores Bars on a graham cracker crust instead because, well graham crackers – a graham cracker base just screams S’mores, doesn’t it? I really did want an easy S’mores Bar recipe, too, that wasn’t too much to throw together for home or for packing away to a get-together, especially since this is a holiday week.

Holiday weeks can take a toll if you’re entertaining and/or have multiple commitments. We used to have a lot of “food days” at work which I loved, but between cooking or baking something for that and doing the same for family and/or other commitments, it could all be a bit much. Not that I have that problem anymore, being at home and all and having turned into a semi-reclusive blogger, lol! But still! Easy is better! And there’s nothing easier than a press in graham cracker crust!

You easily customize The Best Easy S’mores Bars. That’s part of the reason I’m calling them the best. The other is because I’m really, really liking these bars! Maybe it’s a little of all of the above, lol, although that egotistic is tempered with lots & lots of self-doubt!! Seriously, I do love my Besy Easy S’mores Bars and wanted you to be able to find them! The Best Easy S’mores Bars are a cinch to make and fast! Like 10 minutes to put together and 20 to 30 to bake. You probably will want some cooling time, though.

As far as the Graham Cracker Crust, I like to press it down with the flat bottom of my measuring cup, but before I press down, I lightly push the crumbs sideways along the edges to form a bit of a lip. That helps to keep the chocolate and melty ooey gooey marshmallow from sticking to the sides of the pan and maybe even running down it a bit. There’s no need to line the pan, btw. The bars will come out cleanly.

Tweaking the Best Easy S’mores Bars is easy; you can add even more chocolate and more marshmallows. I’d go with about a cup each or even a little more if you really want these bars over the top decadent. I think some restraint is better, though. You don’t want to kill anyone! The other way to customize is with the baking time. Go for about 15 to 20 minutes, just to barely melt the chocolate and marshmallows if you want the marshmallow portion to be melty and stretchy. I covered mine loosely with foil so they wouldn’t continue to brown and baked mine a full 30 minutes, which dried the marshmallows enough so they were not so messy and the bars were nice and crispy. It’s up to you.

All these ingredients can be bought on sale, especially during the Summer Holiday Sales. The stores in our area usually put out several sales over most of the Summer Holidays, and the Hershey bars & marshmallows are often a “coupon” item, so watch those sales closely. This weekend really is the last of the big summer holiday sales, and if you check my link, you’ll find all kinds of items to stock up on!

When I think about buying groceries on a holiday weekend, I don’t think about just what I need for the weekend or the following week. I use the great sales to stock up on all kinds of things that are on sale and think about when the next big holiday sale is going to be. That would be the pretty minor fall sales and Halloween sales, then Thanksgiving. Labor Day is really unique in that it falls right at the end of summer, so many items, like condiments and napkins and certain types of meats, especially, won’t hit another low until next summer.

Mix together crust ingredients and press into pan, forming a slight, about 1/3 inch lip around the edges. Layer ingredients in order given, except for the Hershey bars.

Bake for 15 to 20 minutes for gooier bars, just until the chocolate is melty nd the marshmallows slightly browned. Check one of the chips in the middle bottom by putting a toothpick gently in the center. If it comes out with gooey chocolate the bars may be removed from the oven. If crispier bars are desired, after the marshmallows are golden brown (15 to 20 minutes) cover the pan loosely with aluminum foil and bake 10 minutes longer.

I’ll be sharing my The Best Easy S’mores Bars at Fiesta Friday #239, hosted this week by Antonia @ Zoale.com and Lathi @ From Lathi’s Kitchen