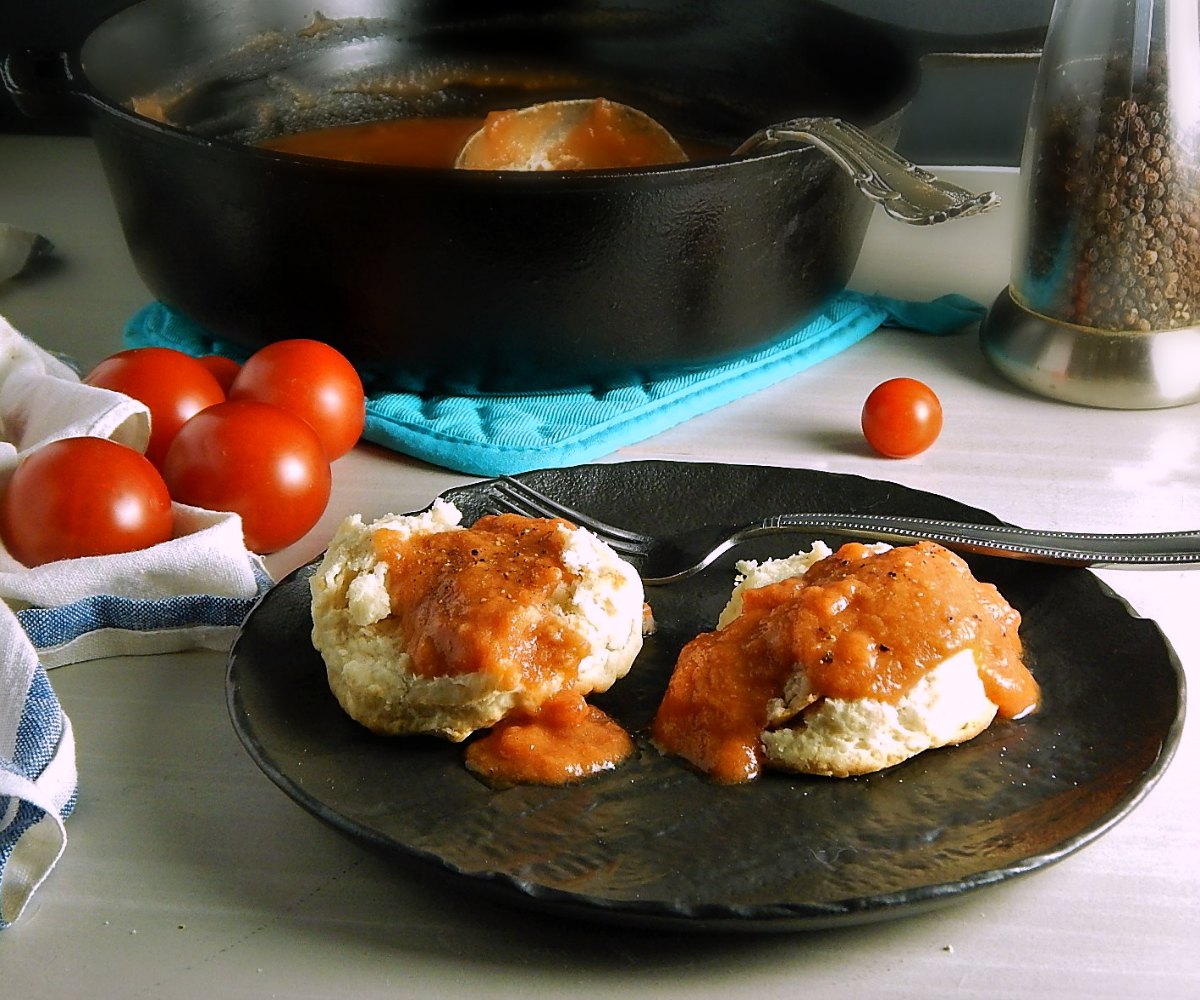 Sometimes, it seems Southerners take credit for just about every recipe that’s good! I recently saw both Rhubarb and Apple Pie that claimed to be Southern. Pshaw! But Southern Tomato Gravy, it seems, truly is one! This is a fun little read on Southern Tomato Gravy. Pay attention to that; I’m gonna mention it later. No quiz, though, lol!

When, where and why Southern Tomato Gravy came about probably doesn’ t really matter; I just think food is interesting. (Obs, I have a blog. Or “blurb” as my 92 StepMom affectionately calls it!)  What’s important is that Southern Tomato Gravy is truly delicious and a great way to put to good use the end of summer tomatoes that come so fast and furious in the late summer heat and in the last weeks before the first really hard frost.

Of course, you might hear Italian tomato sauces called Tomato Gravy, goodness knows why. Maybe to make it seem familiar to other Americans? Take a step back from those meaty, herby and sometimes spicy sauces. True Southern Gravy is a whole ‘nuther animal. It relies, at its most basic, on little more than leftover bacon or sausage drippings, a touch of flour and tomatoes.

It’s served over rice, bread or biscuits, maybe even grits. Sometimes it’s a sauce over meatloaf or chicken. Fun Fact: this recipe that I’ve been making for over 40 years, Chicken Bordeaux from the New York Times Cookbook, circa the 1970s reminds me of Southern Tomato Gravy. Granted there’s wine and mushrooms. Turns out the above article mentions Missisispi born food writer, for the New York Times, Craig Clairborne. What it doesn’t mention is that Craig Clairborne edited the New York Times Cookbook for years, the very cookbook that Chicken Bordeaux came from. Hmm…conspiracty? I think so!

So all that brings us to how to make Southern Tomato Gravy. So many possibilities! Start with the drippins’ or if you must use butter or oil. Add an equal amount of flour just to form a roux and give the sauce a little body. Use two tablespoons of each if you’d like your gravy thinner, three tablespoons to make it a bit more substantial.

From there, it’s time to think about the tomato part of the sauce. Do you want your tomato sauce smooth, chunky or a combination? And are you going to rely on all fresh garden tomatoes (you’ll want to peel & seed them) or canned or a combination? Do you want your sauce to be piquant and full-on in your face tomato flavor? Add a little tomato paste to boost that tomato flavor right after the roux is made. Or maybe you want to tone down the potentially acidic flavor. A pinch or two of sugar, a drizzle of milk or cream at the end will do the trick.

And of course, you’ll want to think about any flavorings. Do you want your Southern Tomato Gravy just as God intended (so I’m a bit prejudiced, lol) plain, relying on the drippings and tomato to bring home the flavor or do you want to go fancier? Maybe you’d like to add some onion or garlic, sauteed in the drippings before the flour is added. A pinch or two of your favorite herb. Maybe thyme, celery seed, a pinch of red pepper, You couldn’t go wrong with a squeeze of lemon or a dash of vinegar or maybe a touch of Sherry. And you’ll never want to forget the good black pepper, both in the Southern Tomato Gravy and over the top, freshly cracked, generously, when it’s served.

While this dish has a history of being a “cheap” meal, maybe served after the war, and certainly, in the Depression, this dish is best made late summer when there’s an abundance of vine-ripened tomatoes to be had. Maybe you garden and have too many; maybe a friend gave you a bag of them, or maybe you’re able to find them at the farmers market. You’ll need about a pound and a half to two pounds of tomatoes.

Of not, do what I do; use a can of tomatoes with a couple of “real” tomatoes to bolster the flavor. It’s the best of both worlds unless you have an abundance of good garden tomatoes. The canned are cheap, tasty and reliable and I’d rather use them than any hot hourse tomato. Any day of the week.

If you have leftover Southern Tomato Gravy, thin it down with more milk and/or chicken stock, maybe a dash of Sherry and refashion it into good old Tomato Soup. No one will even guess it’s leftover.

Add the blended tomatoes, all at once, stirring. Add the chopped tomatoes and their juice. Simmer for several minutes until gravy is thickened to your liking.

Add salt and pepper to taste and sugar to taste if the sauce seems acidic. Remove from heat and add cream or milk.

Serve over good bread, rice, grits, biscuits, chicken or meatloaf, with an additional grinding of pepper over the top.

There’s no need to make a fuss skinning just the two fresh tomatoes added to supplement this Tomato Gravy, but if you’d like to make this with all fresh tomatoes, you’ll need about two pounds and you will want to skin and deseed them. Cut a small shallow X on the bottom of each tomato and drop them into boiling water for about a minute. Scoop them out and plunge them into very cold water. The X will lift up a bit and the skin peels easily off. Deseed them over a strainer placed in a bowl so you save all the juices for the Gravy. You may need to add a bit of tomato juice to get the desired consistency.

I’ll be sharing Southern Tomato Gravy at Fiesta Friday 236, hosted this week by  Julianna @ Foodie on Board and Debanita @ Canvassed Recipes. Stop by and take a peek at their sites. You’ll love Julianna’s food – everything she makes has a special touch that takes it over the top. I’ve only just began exploring Debanita’s blog, but the scope of her recipes is outstanding! You never know what you’ll find.