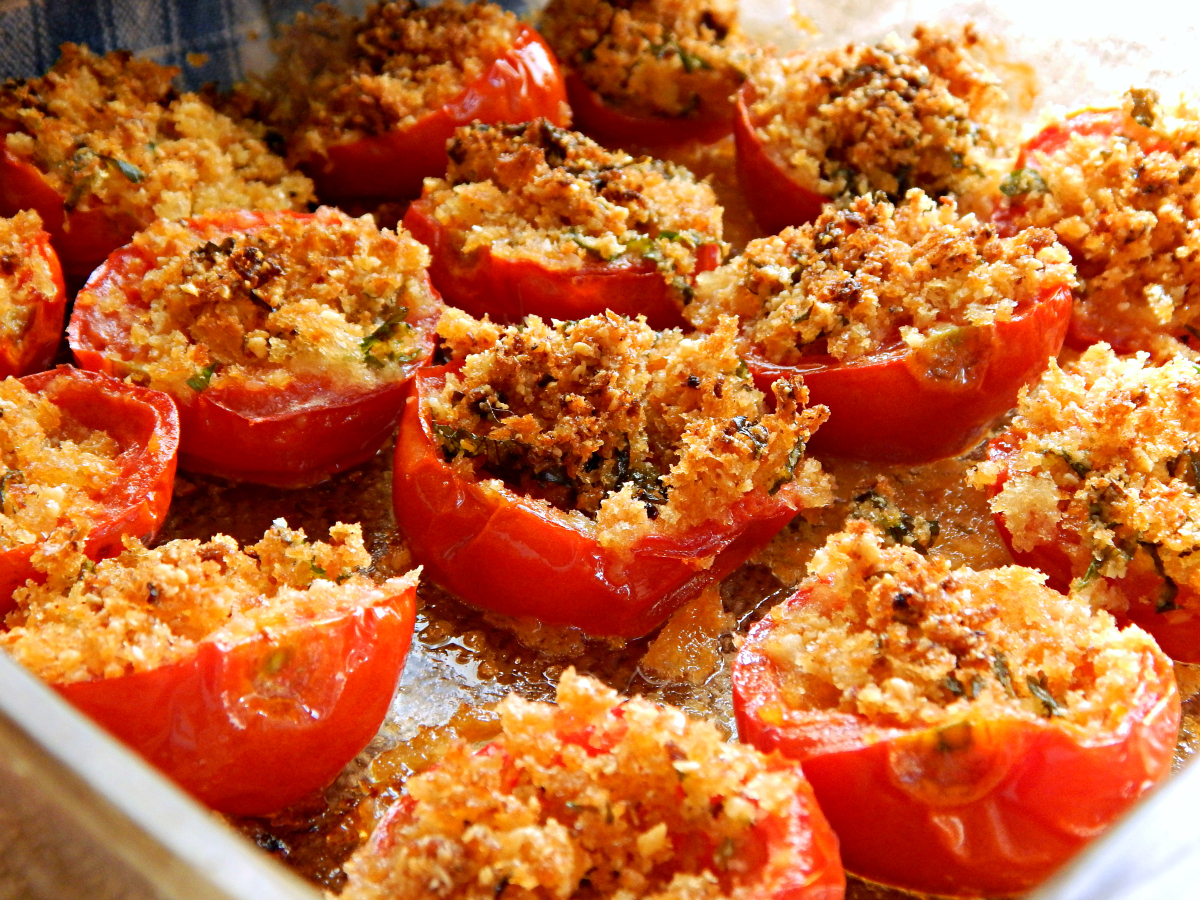 Would a tomato by any other name still taste as wonderful? How about a “pomme d’amour”? I hafta admit, the French name seems to inspire a bit more lustfulness than our simple “tomato” does. And Tomatoes Provencal seems just a bit more romantic than Baked Tomato with a Garlicky Breadcrumb Crust!

No matter what they’re called, these wanton little tender, juicy tomatoes sprinkled with a crunchy garlicky topping are sure to inspire some lust at your table. You’ll be seduced by the way the tomato flavor concentrates and by the crunchy, scrumptious topping. And best of all, they could hardly be easier.

So easy, you hardly need a recipe – frankly, the “recipe” can be used as a guideline. Ad lib, vary your herbs, use butter instead of olive oil, mess around with the cheese. You can’t go wrong! I do prefer a home-made breadcrumb rather than store bought…it really does “make” the tomato, but any breadcrumb will still be delish.

Normally, I use larger tomatoes, but when I made these, we had a ton of these smaller tomatoes from the garden; I just cooked them for a little less time than the recipe called for and ran them under the broiler for a quick minute to brown the topping.

Of course, if you don’t have garden tomatoes, let the price be your guide – often the tomatoes on sale are going to be your best bet – and while you’ll want to pick the type that looks great, baking like this concentrates the flavor and improves even a tomato that’s less than stellar.

Preheat the oven to 450 degrees F.

Slice the tomatoes from core to core. Remove the seeds, hulls and juice. Turn cut side down to drain while you prepare the topping.

Combine the 2 tablespoons olive oil, breadcrumbs, Parmesan, parsley, basil, garlic, red pepper flakes and salt and pepper in a small mixing bowl. Place tomatoes cut side up in a shallow casserole dish just large enough to hold them. Fill the tomatoes with the mixture.

Bake for about 20 minutes until tomatoes are tender and showing just a bit of shriveling along the top edges. If not adequately browned, turn the broiler until the crumb topping is golden and crunchy. Drizzle lightly with olive oil before serving.

I’ll be taking this over to Angie’s Fiesta Friday #137, hosted this week by Loretta @ Safari of the Mind and Natalie @ Kitchen, Uncorked as well as Saucy Saturdays – they’re such a great group of bloggers!

21 thoughts on “Baked Tomatoes with a Garlicky Breadcrumb Crust”