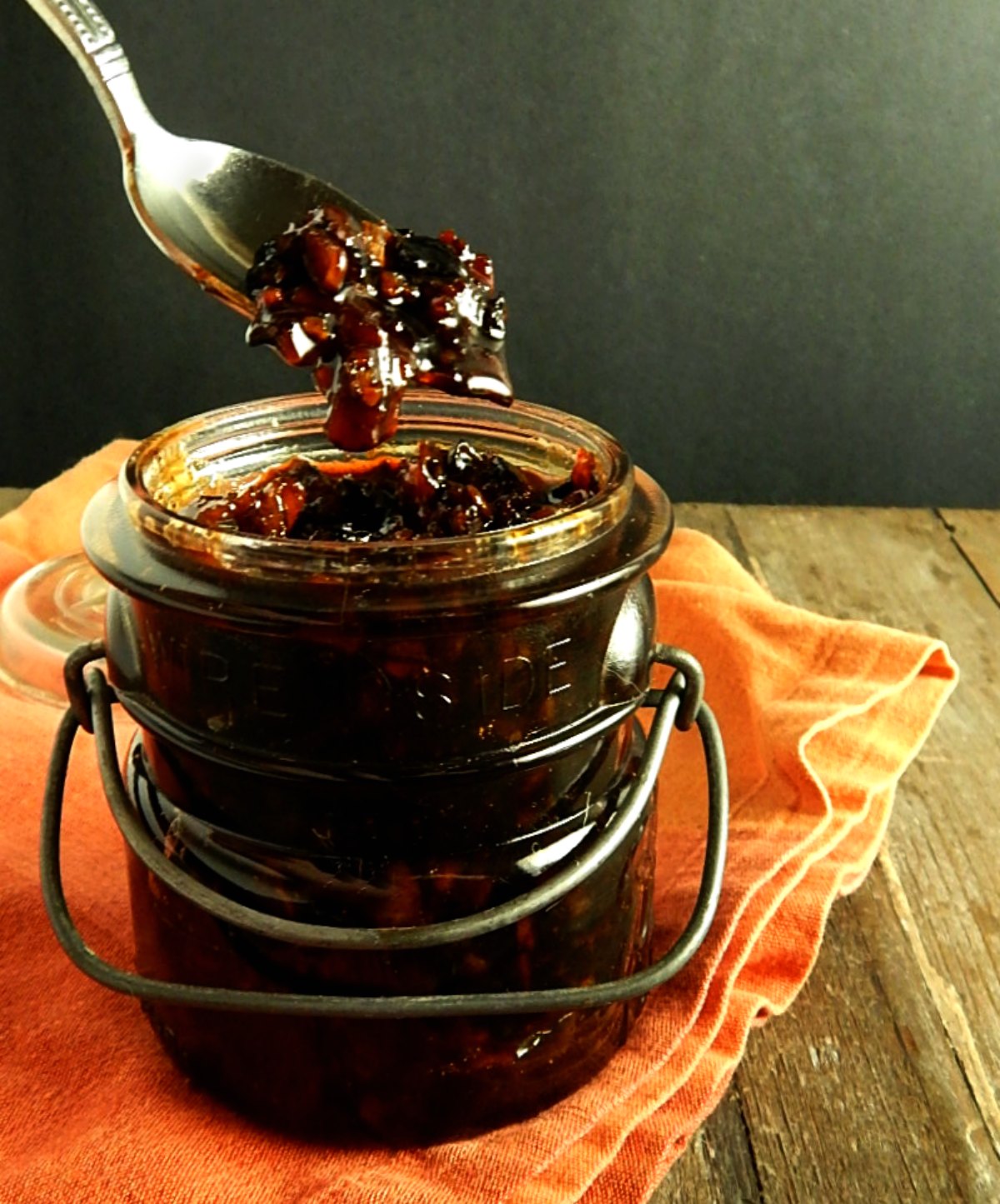 It wasn’t too long ago that Bacon Jam came on my radar – I can tell you when – the week we featured it on our link party, Throwback Thursday, back in July. Well, the recipe looked marvelous, and I used it for inspiration. Thank, Chef Julianna of Foodie on Board! You’ve ruined me forever, btw!! I can’t imagine what my life would be like now without Bourbon Bacon Jam.

I think bacon jam is having a thing. I’m starting to see it all over the place, even advertised on a Hardee’s burger. Which I tried btw, and I can tell you as good as that burger was with its bacon jam, the bacon jam doesn’t hold a candle to this Bourbon Bacon Jam. This jam is crazy, insane deliciousness. It might be a sin!

First of all, I just want to say that if you’re opposed to the Bourbon part of this recipe, just use a little apple juice or even better, apple cider in this recipe. The Bourbon though adds a dusky, deep earthy flavor to the Bourbon Bacon Jam, although it’s just about as good without.

What really makes the Bourbon Bacon Jam is the caramelized onions. Oh my gosh are those caramelized onions incredible with the bacon. And if that wasn’t enough, there’s a few spices, none that stand out on their own, and not enough to give any heat but just enough to round out the flavors and add a little backbone to what could otherwise be just sweetness. Same with the maple syrup. You won’t be able to identify it as a flavor but it’s just the right thing. And let’s not forget just the touch of Balsamic Vinegar.

Your bacon jam will be jammy at room temperature and will thicken up quite a bit in the fridge. I recommend bringing it back up to room temp before serving. You want your bacon jam “jammy” after all. Serve your bacon jam on burgers, brats, and dogs, but don’t forget to add a little to a salad, top a crostini, maybe with a little cream cheese, ricotta or to gild the lily, add a dab on top of a cracker spread with my Easy Homemade Boursin Cheese. Maybe you’d like your Bacon Bourbon Jam in a grilled cheese. It’s a game-changer!

I like to cook the bacon by using my Buffet Style Bacon recipe. I toss it all on a foil-lined sheet pan and bake it to perfection. It’s best to cook the bacon until it’s just short of crispy; most the fat should be rendered out. The photo on my post for Buffet Style Oven Baked Bacon shows just how you want your bacon for your jam. Then, once cool, I lay it out and stack it up about two slices thick. Slice through it the long way, then crosswise, getting it pretty fine.

I used to use only Vidalia onion in my Bourbon Bacon Jam but lately have been just tossing in whatever I have. A combo of red onion along with white onion is great, too. Do cook you onion slow and low and really take some time to caramelize it in the bacon drippings; I start out with a little more of the drippings than actually needed, then drain off any excess once the onions are nicely browned, maybe even with a few beginning to really darken.

The only tricky part of this recipe is getting it to the proper thickness. You might need to add a little water at the end; it’s a bit of a judgment call. I’ve found that if you run a standard cutlery teaspoon through the jam in the bottom of the pan in a four or five-inch swath and the saucy jam fills it in within about five seconds, that’s pretty close to the consistency you want. It will be pretty juicy looking at that time, but wait for it to cool and then see if you’re at the thickness you’d like.

I’ve talked a lot about saving money on bacon on my post for Buffet Style Bacon, so let’s talk about some of the other items in this recipe. Maple Syrup can be pretty pricey. It’s something I use kind of sparingly but both my folks and my kids would just drown their breakfast items in syrup. They could go through a bottle in one breakfast and when that bottle is twelve to fifteen bucks it’s horrifying. I ended up just buying the cheap grocery store stuff for them. But when I do buy Maple syrup, I like to buy it at Costco and just recently was surprised how good the syrup I found at Aldi is.

The funny thing about Bourbon is that I’m not a very sophisticated drinker…and I don’t really care for it. I do like to cook with it, though. Bourbon goes on sale every spring, along with a lot of other alcohols and liquors. Sign up for email alerts from your favorite stores and start watching around February through March.

I keep two different types of balsamic vinegar on hand, one a grocery store variety that I use in recipes like this and a bottle of the pricier stuff (last time I bought it at Trader Joes at a great price) for recipes where it really matters. It’s a bit of a cheat, I know but you don’t always need the really good stuff.

Cook the bacon; my preferred method is always to bake: See Buffet Style Oven Baked Bacon. Transfer to paper towels to drain excess fat off. Reserve a couple of tablespoons of the bacon drippings. Finely chop bacon and set aside.

In a medium-sized saucepan, add a little of the bacon fat, about two tablespoons. Add onion to the pan and cook 10 to 12 minutes on medium, stirring often, until the onion is well caramelized and some are beginning to get pretty dark. Add garlic and cook a minute longer. Drain any excess bacon fat.

Add the chili powder, paprika, and mustard and stir to combine, cooking for a minute to cook off the raw taste. Add the bourbon, off heat, return to the heat and allow to reduce by about half. Add the maple syrup, balsamic vinegar, and sugar. Add the bacon. Bring to a boil, stirring and scraping pan, and continue to cook for two to three minutes until the sugars are melted and syrupy. You may need to add a little water to get to the right consistency.

The jam is finished when a spoon run across the bottom, leaving a swath, fills in at about five seconds. The Bacon Bourbon Jam will continue to thicken as it cools. If at any point the Jam seems too thick, add a little more water. Store in refrigerator, in jars, tightly covered. May be heated in the microwave before serving if desired.

I’ll be sharing Bourbon Bacon Jam at our very own Throwback Thursday; to view the links click on the little blue frog, below.

And, as I do almost every Friday, I’ll be also be linking up to Angie’s Fiesta Friday  – this is Number 135, hosted this week by Jhuls @ thenotsocreativecook and Suzanne @ apuginthekitchen. It’s also become a ritual to link up to Saucy Saturdays! What a fun group of bloggers and I love that they feature a “new” blogger every week.