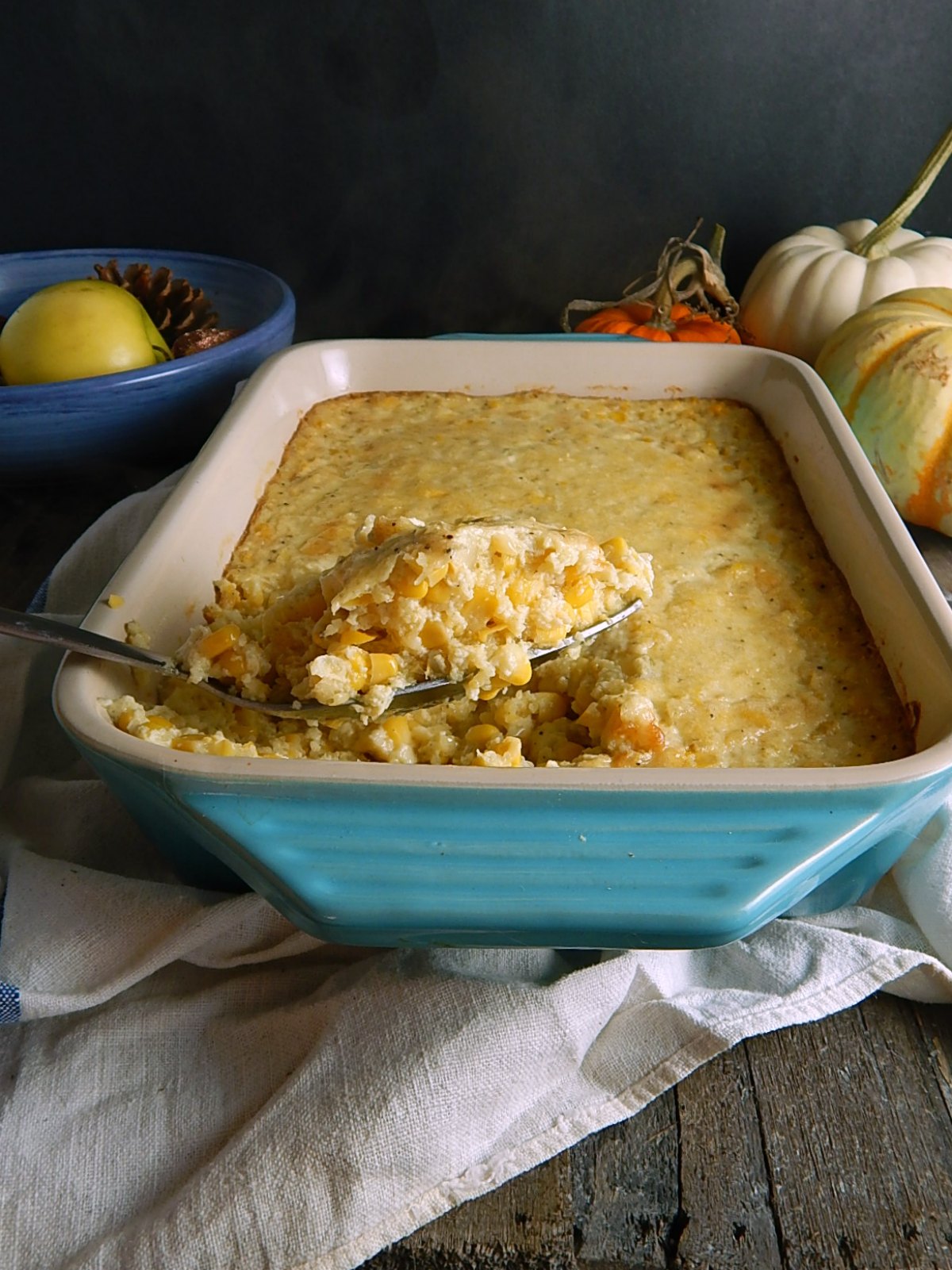 If you’ve never had corn pudding, it’s not really much of a pudding – it’s kind of like a moist, delicious cornbread without much of the bread part! The bit of cornmeal (just enough to hold it together) dairy & egg bind the corn into a delicious melange of flavor.

Rhonda, one of my favorite bloggers mentioned in the comments, b3low, that her Grandma’s Corn Pudding was made with the scrunched up saltines. I remember my Grandma making that, too. She called it “Escalloped Corn.” And typical of the times, I think, it was always really well baked and dry as a bone. Well, this is not your Grandma’s Corn Pudding, or at least not my Grandma’s. My Old time Corn Pudding is more like a baked Creamed Corn.

It’s a little soft and wobbly and tastes like creamed corn and cornbread all combined. It tastes like summer. And it tastes like childhood memories should have tasted like if only we’d have had this when we gathered as a family and cooked out (what we call grilling up Nord, here) and played games till dusk fell and the fireflies came out. Red Rover, Statues, Crack the Whip and so on.

And while this recipe is great as a barbecue or cookout side, Old Time Corn Pudding is great too at other family gatherings, maybe Thanksgiving or Christmas. It’s just a simple side dish that pretty much everyone will love. Sometimes I add a little bell pepper, sometimes I add a little can of green chiles. It’s very “riffable.” And my Old Time Corn Pudding can be made with fresh corn in the summer or canned or frozen in the winter.

If you choose to use fresh corn in this recipe you’ll want to “milk” your corn cobs (run the back of your knife over the corn after you’ve cut the corn from the cob, scraping out the liquid left behind.) Then you can skip that old can of creamed corn in the recipe. It seems I’m usually making this recipe when it’s too early or too late for great corn, so I’ll often use canned or frozen corn along with a can of creamed corn to add the right body and flavor.

The amount of salt you choose to use might vary with the kind of corn you use; canned corn almost always has salt added, whereas fresh doesn’t and frozen probably doesn’t. The pepper, though, is really key in this recipe. Corn loves black pepper!

Since a pound of corn is about 1 1/2 cups, just about the same amount as a can, and a medium cob of fresh corn usually on average is about a cup to a cup and a half of kernels, comparing the best value should be a no brainer. It’s not because all of these items vary so much with sales and seasonality. Toss in coupons of the frozen or canned and all bets are off! When the summer sweet corn in our area is at a low, four to five cobs of corn for a dollar, fresh is always the better value  – not only the cheapest but better, too.

It’s less expensive to use 1/2 and 1/2 than full cream in this recipe, but for holidays or special occasions, I usually use full cream, anyway. I also don’t use half and half for much, while I use cream in cooking and baking and for whipped cream, so it’s a more versatile purchase for me.

Since half and half is half milk and half cream, if I’m choosing by price whether to buy cream or half and half, it’s easy to figure out which costs less per cup. Milk is about 8 cents, so the 1/2 and 1/2 should be half the price of the cream, plus 8 cents. If it’s more, you know the cream is a better value. Just buy it and mix it with milk for your 1/2 and 1/2.

Saute onion and pepper in butter until softened. Mix all ingredients together in a medium-sized bowl. Pour into a lightly greased or sprayed two-quart casserole.

Bake about 40 to 45 minutes until very lightly browned and center is just about set but still has a very slight wobble. This should be moist, so err on the side of less brown; the casserole will firm up as it cools as it sits for a bit.

Note on fresh corn: You’ll need about 3 cups of kernels for this dish, plus the “milk” from the cobs. Plan on about three cobs of corn.

You know I’ll be bringing Old Time Corn Pudding to our Throwback Thursday #37 Link Party, hosted by Quinn of Dad What’s for Dinner, Meaghan of 4 Sons are Us, Alli of Tornadough, Carlee from Cooking with Carlee and Moi! That’s right – me!