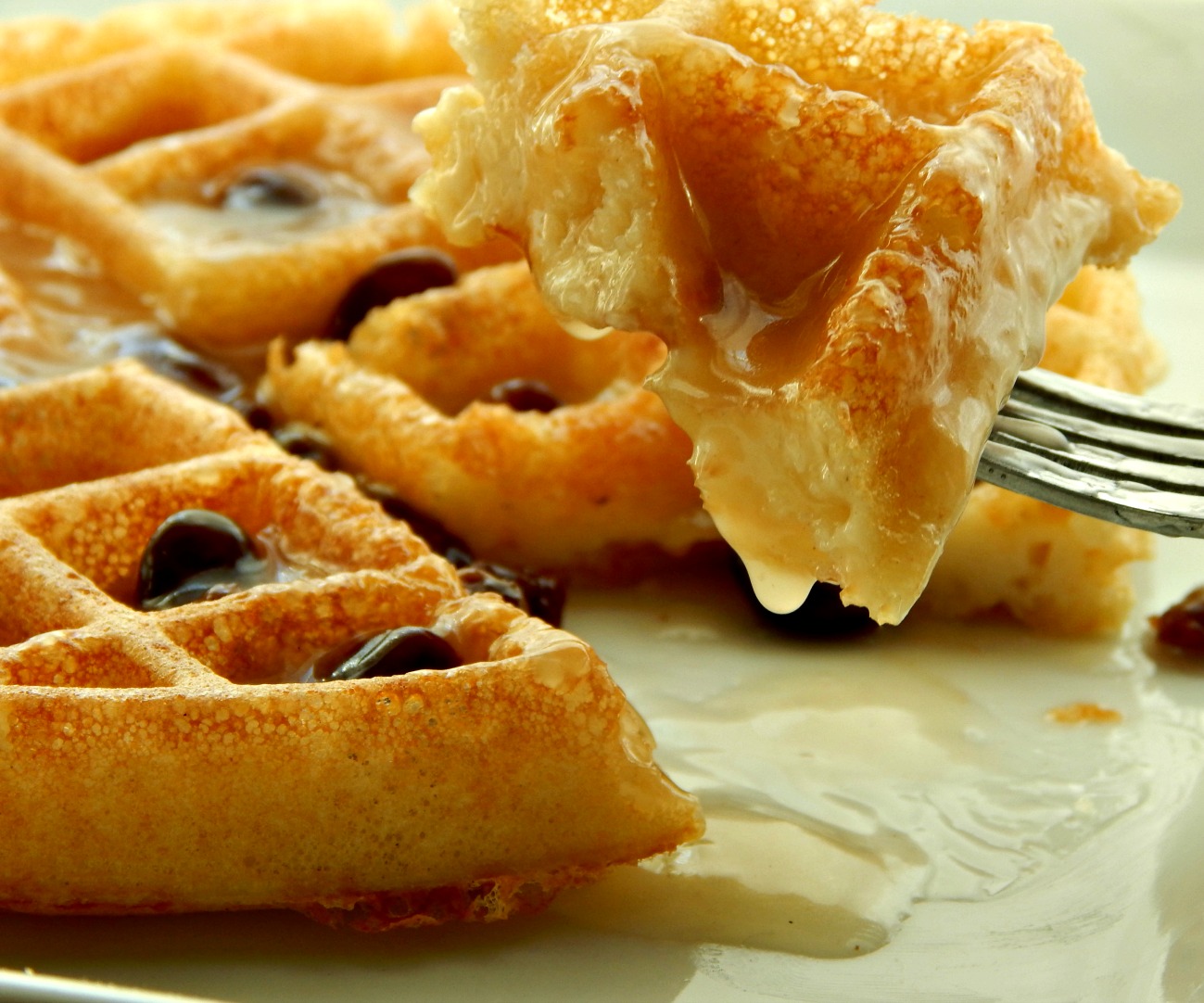 Today’s a special day, a holiday! It’s international Waffle Day! I’m somewhat of a Waffle aficionado, something few people know. That’s because I’m always watching carbs and seldom eat lots at a time anymore and well, waffles are a bit of a pain to make. Not that a good, home-made waffle isn’t worth it. I’d sooner shoot myself as eat an Eggo or a waffle at some mediocre pancake house. No, this is one item that should be made at home.

I have a favorite recipe that I was going to make, but got distracted by Marion Cunnigham’s recipe (that’s Marion Cunningham from Fannie Farmer fame.) I was also going to make my Belgian Liege Waffles, but realized the special sugar in my cupboard was Swedish Pearl, not the proper sugar to make Liege Waffles with. Bummer! Maybe later, now that the waffle iron is out, and my sugar is coming from Amazon. Any day, now. They’re late!

So on I went with the Cunningham recipe, which promised crispy, airy waffles, has an overnight rise (bonus, because that means there’s not much to do in the morning) and has been described as having a not very sweet, yeasty taste. Reviews on this recipe were divided – people either love them or hate them.

I don’t generally post a recipe that I don’t think is absolutely perfect, but I think it’s worth while to post this absolutely Classic Recipe “as is” and with a few modifications. See, reviewers of the recipe stated these waffles turned out great in a deep Belgian waffle maker like mine. Frankly, they didn’t. Many bloggers did, too, and posted partial pieces of the good portions of the waffles. Lies, lies and more lies! Jheeeze. 🙂

While the bottoms of all of the waffles were gorgeous, the tops, below, tell the story. (Notice I didn’t just turn them all over and take a photo of the good side!) I pulled out all my tricks and each waffle was slightly better than the next, and finally with only a bit of batter left, I modified the recipe. That was the winner, in the upper left, and that’s the waffle I showed in the other photos. (Update: my adapted waffles are here.)

Would I make them again? Probably not as written, but I would with a few changes, posted in my notes on the recipe. I’m guessing these are fine in a standard waffle maker; it was the Belgian waffle maker that was at fault, here.

Within minutes of removing from the waffle maker, all of these waffles (including my modified one) began to soften alarmingly, even while being eaten, but when I placed them in a 200 degree oven for a few minutes, all crisped right up and stayed crisp even after cooling. They were still crisp when I packed the remainder up for my son to take home. A short stay in the oven is mandatory for these waffles.

So, try these if you’d like, in a standard waffle maker, and happy International Waffle Day! And good luck with them – I’d love to hear how they worked for you! They tasted fine, although a bit yeasty for my taste, and almost savory. The crispness (after the oven time) was incredible for a waffle. I served these with the Rum Raisin version of my Rum, Whiskey or Vanilla Sauce.

One hint, which I didn’t use today (see the dents in my waffles) was to remove the waffles from the iron using two chopsticks or skewers. They can be easily lifted off without marring the waffles, barring a couple small holes.

Use a rather large mixing bowl — the batter will rise to double its original volume. Put the water in the mixing bowl and sprinkle in the yeast. Let stand to dissolve for 5 minutes. Add the milk, butter, salt, sugar, and flour to the yeast mixture and beat until smooth and blended. Cover the bowl with plastic wrap and let stand overnight at room temperature.

Just before cooking the waffles, beat in the eggs, add the baking soda, and stir until well mixed. The batter will be very thin. Pour about 1/2 to 3/4 cup batter into a very hot waffle iron. Bake the waffles until they are golden and crisp. This batter will keep well for several days in the refrigerator.