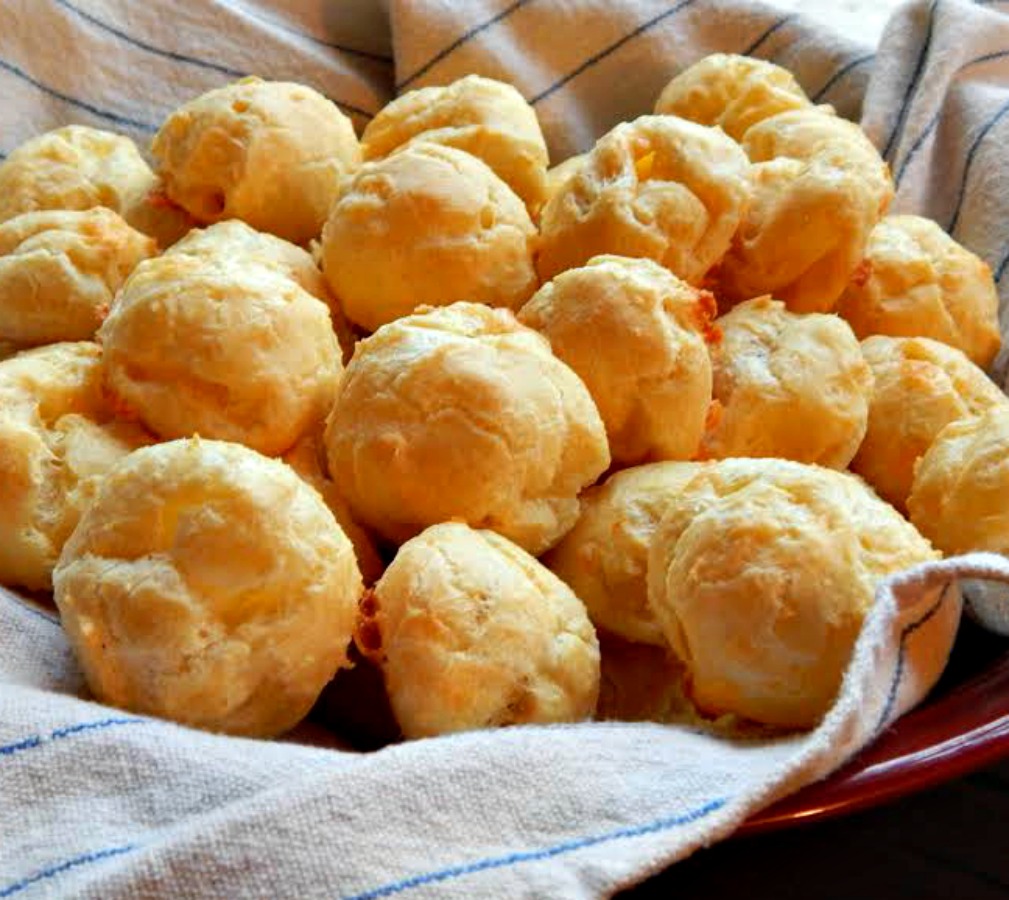 I seem to have been on a French food kick, lately, but this little recipe was inspired by one of my favorite movies, Dean Spanley (now on Netflix.) Mrs. Brimley, the cook, in deciding what to make for a dinner, mentions her Choux Pastry, “too good to be eaten,” she says. That reminded me of Gougeres, made from pâte à choux.

Choux Pastry, or pâte à choux is simply a mixture of butter, water, and flour cooked until shiny. Eggs are added, one at a time and beaten in. Cheese is folded in and then they’re baked to a lovely golden brown, crispy, airy deliciousness. The pastry is easy to make and super inexpensive! I love “Gourmet” on a budget, and nothing seems fancier than when called be a French name.

Here, I’ve used a good White Cheddar, but any relatively dry cheese works very well. Softer cheese may produce a bit too much moisture, so offset that by slightly reducing the amount of egg. Not only can you vary the cheese, you can add herbs, spices, various flavorings and vary the liquids, too. Jalapeno Beer Gougeres, anyone?

These White Cheddar Gougere are presented on their own, but Gougere are awesome filled. You’re only limited by your imagination (and hopefully) good taste! I often see crab, tuna or lobster salad, but the variety of fillings is almost endless. Goat cheese, cream cheese mixtures, caramelized onions, caviar, chorizo and cheese and on and on.

While a traditionalist may bemoan the degeneration of a French classic, as Fisk, the Senior, says in the movie, often in his most stentorian tone: “There is no point in regretting things that have gone to the trouble of happening.”

So I recommend you make these lovely little cheese puffs, and perhaps watch Dean Spanley as you munch on them. Put on the closed captions, the speech runs fast with several different accents, and it would be a shame to miss any of the terribly subtle, dry humor. And don’t wait too long; we are, after all, all of us, in the “anteroom of eternity.”

I already bought a dish to Fiesta Friday, but I couldn’t decide and had made two, so I figure why not post a second! Thank you Hilda and Julianna for co-hosting! We are, after all, coming up to the Superbowl, when it seems everyone is looking for a new appetizer recipe.

Heat the oven to 425°F if you will be baking the gougères right away. Line 2 large baking sheets with parchment paper, if desired, for easier clean-up.

Bring the water, butter, salt and cayenne or mustard to a boil in a small saucepan. Dump flour in, all at once, stirring vigorously. Cook 2 to five minutes, stirring, until dough becomes shiny and leaves the side of the pan in a mass. It’s normal for a film to form on the bottom.

Remove from heat, and using an electric mixer, stand mixer or sturdy spoon and a lot of muscle, let cool for several minutes, beating, until the steam dissipates. Working quickly, beat in the eggs one at a time until the dough is smooth. The mixture may appear curdled at first, but should smooth out after an egg or two is added. Mix in cheese.

Place mixture in a piping bag with a plain tip, if desired, and pipe small mounds of about 3/4 inch, or alternatively use a tablespoon scoop to transfer dough to the cookie sheet. Mounds of dough should be about 2 inches apart, and it is best, if all are to be baked, to use two cookie sheets. (The oven will be turned down after the sheets are placed inside, so to avoid a wait and another preheating, it’s best not to have more cookie sheets than oven racks.)

If desired, add a small amount of cheese to the top of each puff.

The dough may be baked immediately or may be frozen.

Place in oven and turn down immediately to 350 degrees. Bake for 20 to 25 minutes, until golden brown and puffed, and feel firm when pressed gently on the top. Do not open the oven door until the puffs have expanded and set, about halfway through cooking time. If cooking unevenly, after that point oven can be opened and the trays rotated top to bottom, back to front, very carefully. Cool for several minutes on the baking sheet to minimize the risk of deflation.

Freeze on parchment in a single layer; when frozen gather together in a heavy ziploc bag or container. When ready to bake, bake from the frozen state as directed above, adding a few minutes to the baking time.

Eat at once, or cool to room temperature. May be reheated for several minutes in a hot oven.