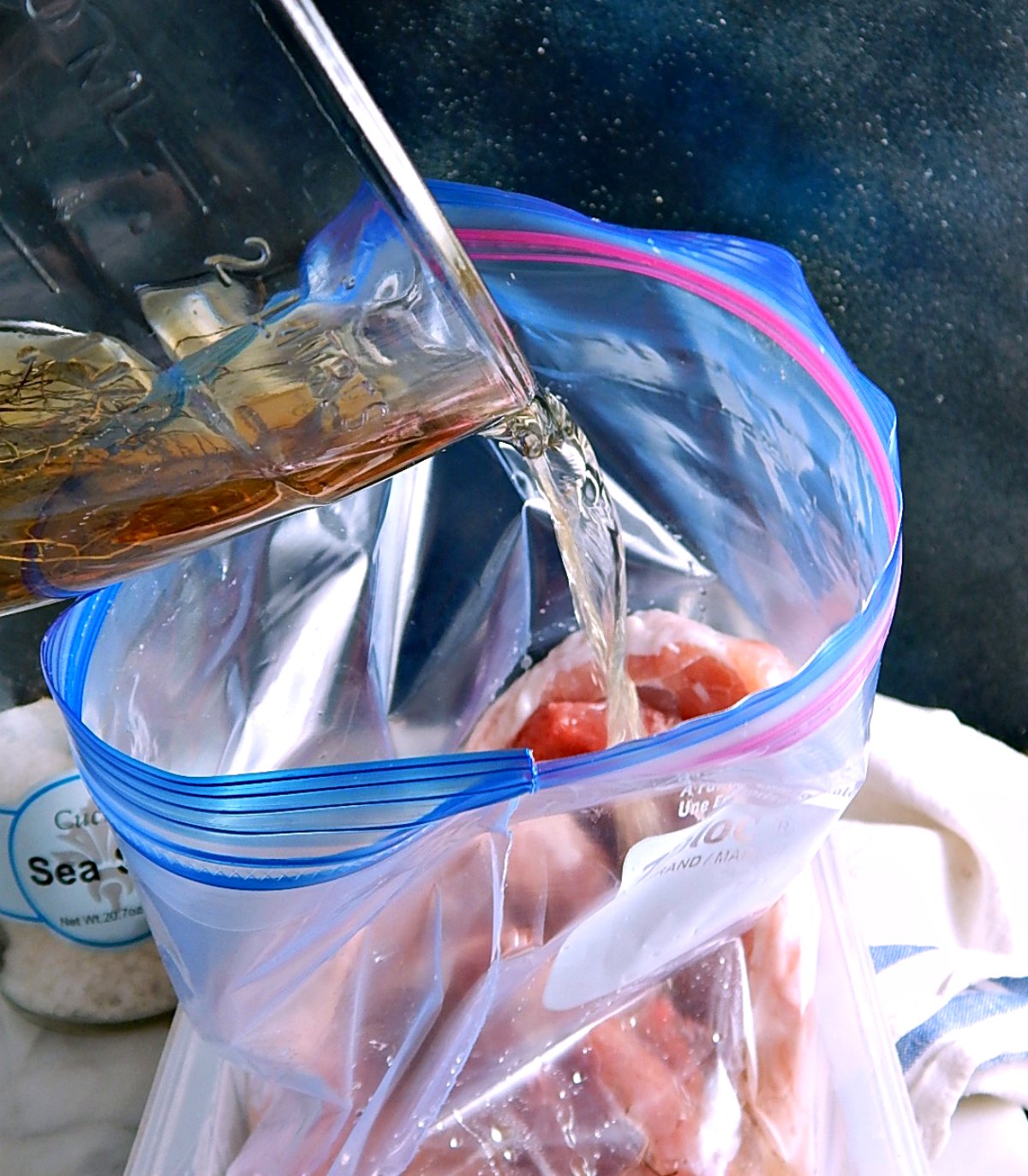 Do you guys brine your pork chops? If you don’t I highly recommend you give it a shot and this Favorite Pork Chop Brine is a great one to start with. With very little effort and just a little planning, you can take today’s leaner (and sometimes drier) pork chops and help nudge them towards something more succulent and juicy by brining. You’ll still need to be careful not to overcook that pork, but brining is a game-changer.

1) Add the sugar, salt and herbs/spices to a bowl.

I’m always amazed at how well a brine (soaking meat in a salty solution) works on pork chops, and especially amazed at how just a short amount of time (as little as 15 to 20 minutes) can make a difference. A little longer, though, is always better. Two hours works very well, and three to four hours is pretty much ideal. Chops can be brined for up to 12 to 24 hours, but don’t brine longer. Your pork can get overly salty and in some cases may deteriorate. No one wants that.

About My Favorite Pork Chop Brine:

I love this brine with almost any pork chop I make. It’s flavorful but a kind of complementary yet still kind of neutral flavorful if that makes sense. There’s the salt, of course, which works its magic by making the meat moist. According to Cook’s Illustrated (Love those guys!) “Brining promotes a change in the structure of the proteins in the muscle. The salt causes protein strands to become denatured, or unwound…when protein strands unwind, they get tangled up with one another, forming a matrix that traps water.”

And the liquid in this brine is half apple juice and half water. Because you can’t go wrong with pork and apple. Sometimes, depending on what kind of dish I am making, I might leave out the apple juice and go with straight water or add another liquid altogether.

Then for the flavorings (beyond the apple juice), there is the sugar, which is usually brown sugar in my brine, because it enhances the flavors and promotes color when browning; I might shake things up a bit and use cane sugar, molasses or sorghum, instead. And for the herbs/spices, I think you can’t go wrong with a few peppercorns, and they are in almost every brine I make, along with a touch of thyme or marjoram. I might vary those flavorings, too, if I’m going for a more specific flavor.

2) Add a portion of hot water to dissolve the salt and sugar.

Brines are super easy to make. You just mix the ingredients together. I do like to dissolve the salt first in a little hot water, which is a small portion of the liquid I am using because the salt needs to dissolve and then I can add the rest of the cool or room temperature liquids to the dissolved salt solution. That’s so I won’t have to wait around forever for that brine to cool or add ice like I would if all the liquid were heated. And for food safety reasons, you don’t want to add your pork to a warm or hot brine.

Usually, for pork chops, I don’t use a lot of brine because I add the chops to a Ziploc, after placing the Ziploc in a container to hold it upright. Then the whole works goes in the fridge in that container just in case there is a leak. I didn’t show that part in the pics. Once the air is pushed out of the Ziploc, it does a great job of surrounding the chops with brine. If you’re around, it never hurts to open the fridge and quickly turn around the Ziploc just to redistribute the brine now and then.

As far as the salt, a five to six percent of salt to liquid is the standard, but if you’re measuring dry, rather than by weight (and most of us probably are) you’ll want about a tablespoon of kosher salt per cup of liquid. Different kinds of salt, table salt, kosher salt, sea salt & Himalayan all have different size crystals so the measurements can vary, but usually, you’ll use about 2/3rds the amount of a fine salt as you would a kosher salt.

For the most part, you’ll cook your brined pork chops as normal, but do be sure to pat them dry after they come out of the brine. It’s not the most fun thing in the world, patting those slippery, cold wet chop dry, but it means your pork will cook, not steam in the pan or on the grill.

Brining works wonders on pressure cooker pork chop recipes, too. I brine the pork chops in my Instant Pot Pork Chop One-Pot Dinner. I also brine these traditionally cooked or grilled Apple Glazed Stuffed Pork Chops (please forgive those photos) with this brine and I brine several other pork chop recipes on my site. You can use the search bar and enter “brine” or click on the tag towards the bottom of the page for more recipes and you’ll find beyond pork, I brine all kinds of things; anything from pork to chicken to pickles, to potato chips and more.

A good basic brine for pork, easy to vary or riff off.

In a non-reactive bowl, add the sugar, peppercorns and thyme. Heat one cup about 2/3 cup of the liquid to very warm, pour over the ingedients in the bowl and stir to dissolve. Add the remainder of the cool to room temperature liquid. Place pork chops in a ziploc bag and place the Ziploc bag in another container (to hold it upright and to control any possible leakage when it is refrigerated.) Once the salt mixture is cool, pour over the pork in the Ziploc. Squeeze to remove as much air as possible.

Recipe may be increased; it is likely you will not need to use an exact proportion of the herbs or peppercorns, even with more brine; just increase those items by a bit.

I’ll be sharing My Favorite Pork Chop Brine at Fiesta Frida 301, hosted this week by this week by Antonia @ Zoale.com and Angie, herself.