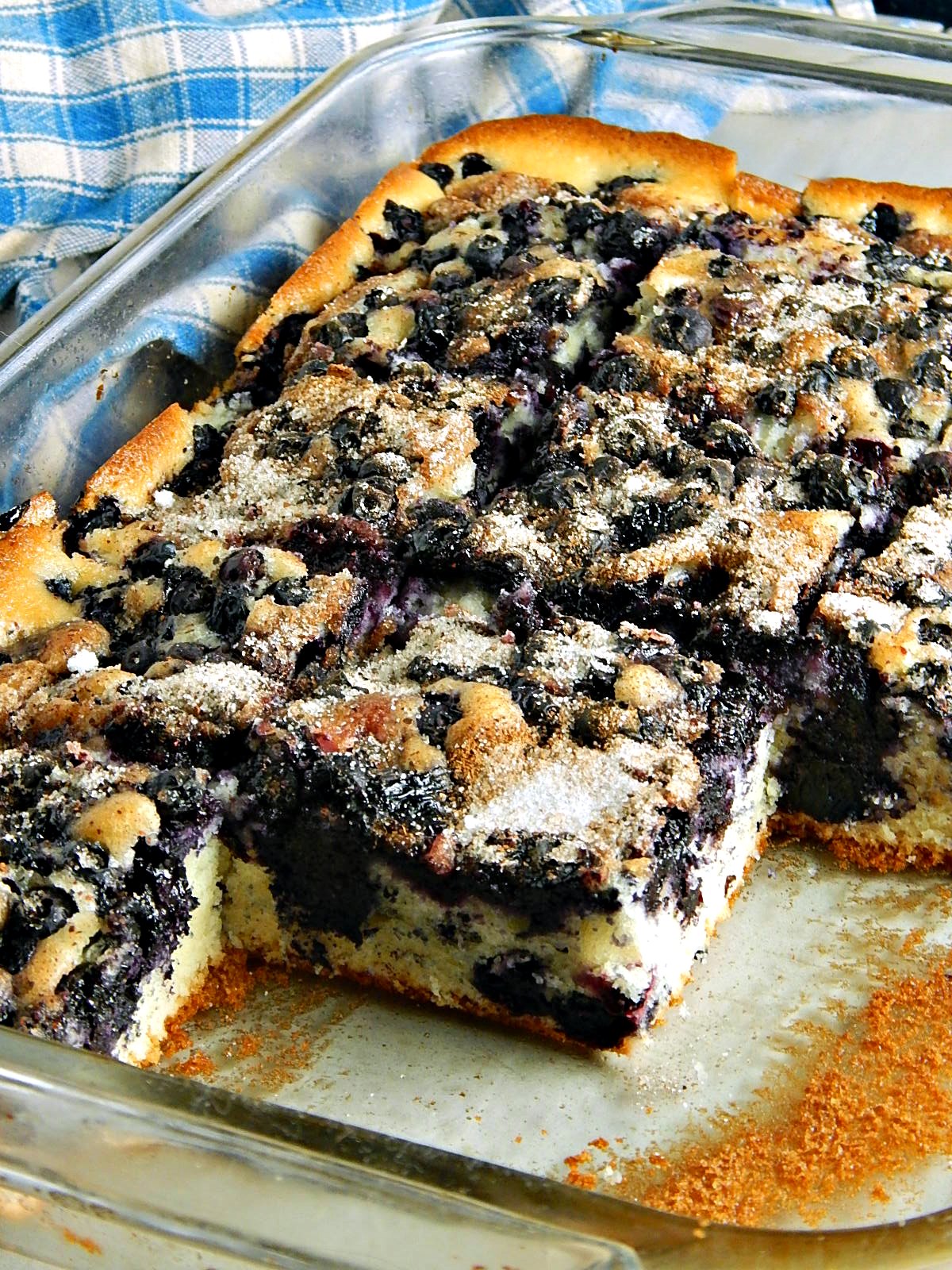 Do ya know what I’ve been doing lately? In my quest to get healthier? Picking up Blueberries and intending to use them for salads and then forgetting them until they need to be used A.S.A.P. Sometimes I’ll freeze them when that happens, but this time I decided to make Simple Blueberry Boy Bait.

So that healthy kick backfired, but who wouldn’t want to make a recipe with a cute name like that? And there’s a story behind it. According to New England Today, where I poached this recipe from, “In 1954 a 15-year-old Chicago teen named Renny Powell submitted a blueberry coffee cake recipe to the Pillsbury $100,000 Recipe & Baking Contest (precursor to today’s Pillsbury Bake-Off). Renny took second place in the youth division for her creation, named in honor of its powers with the opposite sex.”

Thank you, Renny, for the recipe! Blueberry Boy Bait is what I would call a coffee cake, and for those of you not in the States, a coffee cake is a simple cake, made to eat with your morning coffee, not a cake made with coffee as an ingredient. This version is super easy and makes a big panful of coffee cake practically bursting with blueberries.

There are several renditions of this coffee cake out there (the original was made with shortening) including one that was reworked by America’s Test Kitchen. I’ve looked at that recipe and it’s quite a bit richer and just a bit sweeter than this one, and I’m sure it’s marvelous.

I wanted to stick with an easy recipe, one that I think might be a bit more in line with the original, one that’s just a bit more humble. This one, I think fits the bill. This isn’t an “over the top” cake; it’s what I would call a “serviceable” coffee cake. An everyday coffee cake. It’s not very sweet; the tartness of the blueberries shine through, and it’s nice and sturdy, just like a coffee cake should be. I know that because I boxed up the Blueberry Boy Bait for my son, he put it on the roof of the car and drove off. He was able to rescue most of it!

The method for this cake is a bit different than most. It’s put together in kind of the same way a cake mix is. The dry ingredients are whisked together then all the liquid ingredients dumped in. Then it’s mixed for three minutes, so you do need to pull the mixer out for this recipe.

That gives a nice, thick bottom layer that holds the blueberries on top, mostly, with pockets of blueberry dripping down into the cake layer here and there. It’s a fabulous, jammy deliciousness! The top is sprinkled with cinnamon sugar before baking; some melts in, some forms a light crispness on top here and there; the next day all the crispness dissolves, although I think the cake does taste even better.

One thing about the original recipe; it said to bake for 50 minutes. I checked it about halfway through, thinking I might turn it halfway through (an old trick to ensure even baking) and it was just about done! So I’ve altered the timing in my recipe.

If you follow me, and if you don’t, I hope you will, either on social media or by email (I’ll never send any junk) you gotta know I shop differently than most folk, and it maximizes savings. I buy all my baked goods on deep sale, usually around holidays known for baking (Thanksgiving, Easter, and for chocolate, Valentine’s Day) and really stock up. Of course, now that we have an Aldi, I do a lot of shopping there, and the everyday prices rival that of the grocery store sales prices.

Blueberries, which really used to be so pricey are often at Aldi for cheap and are a great price at Costco or Sam’s. And of course, they rotate in and out of sale at the grocery throughout the summer. Let the prices be your guide and you can’t go wrong. Sometimes, when they’re in season, the price at the farmer’s market is really great. It just depends. And if you pick your own you’ll have a day of exercise & entertainment along with a great price. If you like that sort of thing.

One thing I do like about this recipe, especially if you get a great price on your blueberries, is how inexpensive this cake is to make. It’s made with oil rather than butter and that lowers the cost significantly. And bonus because you won’t have to wait for your butter to be at just the right temperature and you don’t have to cream it. You can make Simple Blueberry Boy Bait at the drop of a hat. Like any time you realize those blueberries need to be used up, A.S.A.P.

In a medium bowl, whisk together the flour, 1 cup of sugar, baking powder, and salt. Add the oil, milk, and eggs. Mix with an electric mixer for 3 minutes. Pour the batter into the prepared pan, then evenly sprinkle the blueberries on top.

In a small bowl, combine the remaining 3 tablespoons of sugar and 1 teaspoon of cinnamon, then sprinkle over the blueberries.

Bake until a cake tester inserted into the center comes out clean, about 35 to 40 minutes.

I’ll be linking up my Simple Blueberry Boy Bait at Angie’s Fiesta Friday #297.