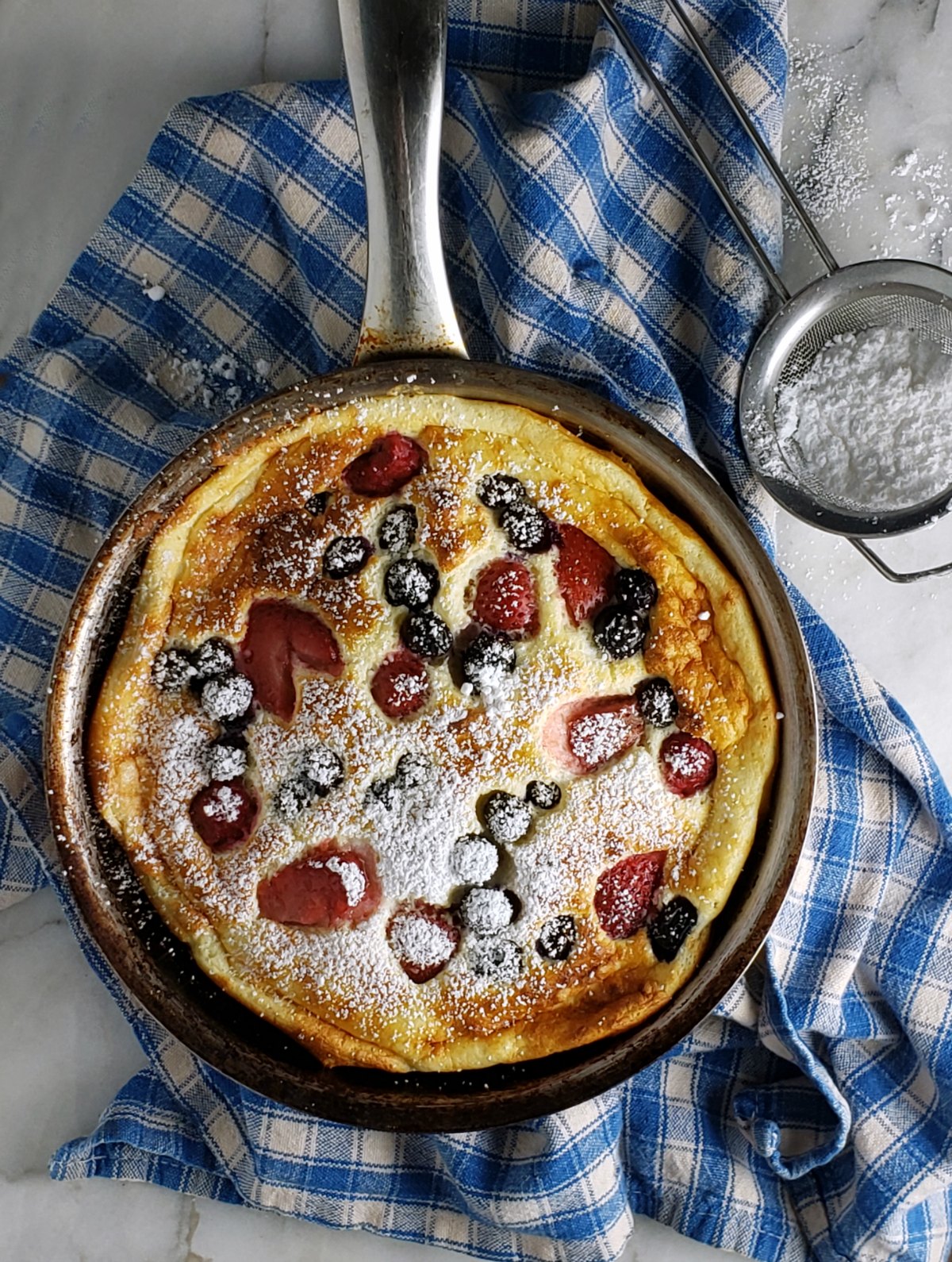 Every year I go through the same thing. I see the small signs of fall coming, but I just ignore them. I never want summer to end and I never want to think about our Minnesota winter to come. But one thing that’s a sure sign of that impending change of seasons is what I want to eat and how I want to cook. And today I was thinking Berry Souffle Pancakes.

See during the heat of summer it rarely occurs to me to make something that requires cooking in the a.m. But there’s just something about getting up on a chilly morning, padding out to the kitchen and turning on that oven. There’s not a sound in the house and I hear the gas come on in a whoosh and the few clicks and clacks my old stove makes as it preheats. Somehow that makes me feel rooted in the familiar, and in minutes the kitchen is toasty and warm. Now, I’m not a morning person, but even I have to admit there’s something zen in that!

But speaking of zen, or the lack of it, these souffle’s probably aren’t going to be your everyday recipe; they certainly won’t be for me. But know they are well worth a little work and are a perfectly beautiful thing.  I wish I could have gotten a photo at their full puffiness! They’re light, custardy and absolutely divine. They’re also surprisingly low carb for a “pancake” & there is no added sugar except for a little sprinkle on top. Ya gotta love that!

I have been obsessed with these Souffle Pancakes for ages. I first saw them on a Diners Drive-Ins and Dives episode featuring Bette’s Oceanview Diner but it was one of those episodes with no recipe given so I had to kind of punt, combine recipes and add in a few touches.

In the episode, these were called  Dutch babies or a Dutch Bunnies but they are truly a souffle. I love Dutch babies and have a couple on my site, David Eyre’s Puffy Pancakes and Apple Oven Pancakes (Bad pic alert on the Apple pancakes but they are caramelly deliciousness!) But you can probably see the differences between the souffle as this recipe (egg whites are beaten and folded in) as opposed to the simpler Dutch babies that are just tossed in the blender and use just the heat of the oven to make them rise.

You can use berries in this recipe, which I love because they become almost jammy, especially the strawberries and blackberries but I don’t see why you can’t use other fruits if you’d like; moister fruits like peaches or nectarines might be best, I think. Just make sure it’snot something heavy, like big chunks of apple, that might fall down to the bottom through the batter.

The biggest thing about this recipe is that you’ll want a bit of browning and want the souffle cooked all the way through. It’s started on a burner, then moved to under the broiler, then finished in the hot oven. It’s a bit of fussing, timing can be a little bit of a variable depending on your oven, so watch the souffle carefully. After the first time you make it, you’ll have a good feel for it. If you’re planning on making it for company, you might want to consider a practice run. The first time I made it, the bottom was a bit well done. The second time, I knew just what to look for, a light golden brown, and it was perfection.

Serve it quickly; a souffle waits for no man, woman, child or would be food photographer and the puffiness just slowly sinks! Ideally, everyone will be at the table, sipping their juice, maybe nibbling on whatever else is on the menu, as you bring that glorious souffle from the oven to the table (have a trivet there) and triumphantly place it (gently) to oohs and ahs.

This serves four, best accompanied by fruit or maybe sausage or bacon. If you want to make multiple souffles, I noted when I watched the episode from the diner, that if prepared at once, it’s pretty easy. Double the recipe and use half of the batter and whipped egg whites. Then when that is finished, slide the souffle off onto a serving dish, serve and make the second. The pan will be hot and it will go fast.

There’s no doubt that just about any breakfast food is inexpensive! The souffle itself runs about a dollar; it’s the berries that can be a bit pricey. I watch for the berries on sale, and since it’s often only one type of berry at a time that is discounted at the store, you’re likely to find it less expensive if you stick with just whatever is at a discount. Watch for berries on sale throughout the summer especially around any holiday.

I’m not a coffee drinker so I rarely have half & half on hand. I generally have cream, so a good approximation is half cream and half milk. Look for either at great prices around grocery holiday sales or at the buyer’s club or Aldi for everyday prices that rival the best sales at the grocery

A light and airy, barely sweet souffle in pancake form.

Preheat oven to 450 degrees F. Place a rack 5 inches or so under broiler and one in the center of the oven.

Beat the egg yolks and half & half in a large bowl until well mixed. Slowly whisk in the flour, stirring just until combined, then whisk in the butter, salt, and vanilla. Set aside.

In a separate bowl, beat the egg whites with an electric beater until almost stiff peaks. Gently fold the whites into the batter, folding just until the whites disappear. A few streaks are fine.

Lightly grease or spray an 8-inch ovenproof skillet and heat over medium high heat. Pour and spoon the batter into the skillet while the skillet is on the burner, turn the heat down to medium. Cook several minutes, just until the batter looks a little firmer and there is a bit of light golden brown on the bottom when an edge is carefully lifted.

Turn on the broiler. Remove skillet from heat and working quickly scatter the berries on top of the batter. and place pan under the broiler. Watch closely and cook broil until the top of the souffle is golden brown. Turn broiler off and switch to bake, 450 degrees F. and move the pan to the center rack and bake for three to four minutes or until just firm to the touch in the center.

Dust with powdered sugar if desired.

Note there is no sugar in the batter; if you have a sweet tooth, add a tablespoon or two to the egg yolks before mixing.

Keywords: Breakfast or Brunch Dish, Berries, Souffle, Pancakes, Half & Half