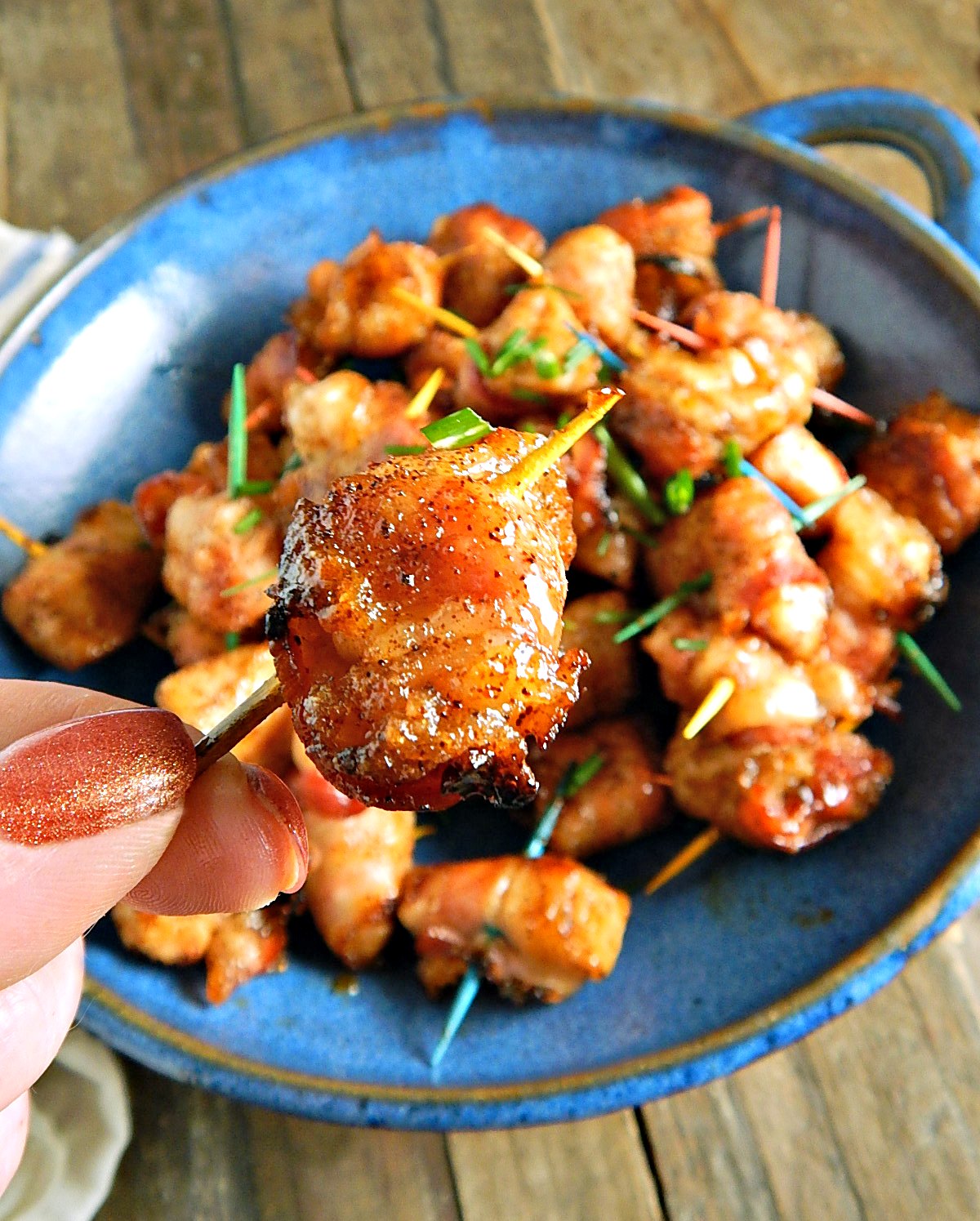 I saw a comment once on another site from someone that said she was tired of food bloggers squealing about their recipes. I’m guilty, I know. Coz when I make something really good, especially if it’s really really good, I can’t contain my excitement. And if it has bacon? Well that’s worth a squeal or two, right? And these Bacon Wrapped Chicken Bites are def squealable. If that’s not a word. It is now, lol!

So not only are Bacon Wrapped Chicken Bites squealable, you might just be saying “oink oink” when you’re all done eating them and realize just how many you ate! If you are serving these or bringing them to a function, make more than you think you’ll need. They are going to go fast.

It’s funny, I was just trying to figure out how to write a pig squeal. I couldn’t find it, but my best guess is they kinda go “ooh wee” (which does kind of sound like sooo-eee, the standard pig call) when I came across this article about Animal Onomatopoeia. Did you know that in the US we say pigs go “oink oink” but that’s not the case everywhere?  Pigs say boo boo in Japanese, chrum chrum in Polish, groin groin in French and nöff-nöff in Swedish. Or rather we attribute those sounds to the pig. So if you want to be fancy, I guess you’ll want to say the French groin groin after you eat these! Imagine the looks you’ll get!

But back to these Bacon Wrapped Chicken Bites. Just imagine tender, delicately flavored chicken all wrapped up in a bit of bacon. Then imagine that bacon all crispy, caramelized deliciousness, a little sweet with just a little heat from the brown sugar rub you’ve rolled each bite in prior to baking off and broiling. Need I say more? Well, maybe just that next time I might put these on skewers and try them on the grill!

Be warned: these really are a little addictive. Especially if you’re a little cochon like me. Yeah, yeah, that’s French for pig! It sounds a little bit better in French, doesn’t it? It does have a darker meaning, I’m afraid. I guess no matter what language you call someone a pig in, it isn’t very flattering!

These appetizers are easy and require a minimum of ingredients. But they are a holy pain in the patootie to make. I suppose that’s partly because you make 50 of them and anytime you make 50 of anything, it gets a little wearing. This recipe comes pretty darned close to using all the ingredients as long as you cut your chicken to the right size.

I suggest setting up an assembly line, and working quickly and diligently, it took me a good 30 minutes to get these ready for the oven.

Set up a large sheet tray, cover it with heavy-duty aluminum foil, then a rack and spray that rack heavily both sides, with nonstick cooking spray.

Then slice all the chicken into as close as you can get to 1″ pieces. That’s pretty small, but don’t worry, they seem a little more substantial after they’re cooked. Put them onto a cutting board or in a bowl and season them. I like salt and pepper and be generous, and then a surprise. A tablespoon and a half of vinegar. Some people like a little Teriyaki or Soy sauce and both are good, too.  Smoosh it all around and let it sit and marinate as you move forward.

Mix up your spice rub. I like to use Chili powder with about a teaspoon of cayenne, maybe more, it just depends how spicy I’m feeling. Or you could use a barbecue type rub if you prefer, or maybe a Mexican type of a spice blend. Maybe you’d even like to go rogue and use something entirely different. You can see my Spices and Herb page for some inspiration. But I usually stick to the chili powder because that’s my first love. Place that in a shallow bowl.

Then open your bacon, slice into thirds, from the top to the bottom of the package. Working quickly before the bacon warms up, separate all the pieces. It’s the devil to get them apart once they warm up to room temperature. Gently, so it doesn’t stick all together place the bacon on your cutting board with the chicken.

Spread out your toothpicks. You’ll need about 50 but who wants to count? Not me. I dump a bunch out and guestimate and push them in little piles and spread them out so that they’re easy to grab and I’m not in danger of contaminating the whole lot with my chickeny fingers when I get down to the end.

The bacon goes to the left (if you’re left-handed work in the opposite direction) the chicken to the right of it, then the toothpicks, then the brown sugar spice mix, then the sheet tray with the rack.

You’ll pick up a piece of bacon, then a piece of chicken and roll the bacon around the chicken, securing it with a toothpick. If the bacon splits on one or the other end, place that portion so it is inside the wrap. Gently place them in the brown sugar spice mixture, and when you have about 10 or so in there, move them about a little, piling some of the mixture on top if you need to, then take your hand, kind of give each a gentle squeeze in your palm to adhere the spice mixture to the bacon. That also makes them look a little more attractive, a little rounder, and helps them cook more evenly. Place that batch on the sheet tray and continue with another batch. I managed to fit all 50 on a rack over one sheet tray. I had seven rows of six and one row of five and then a couple of odd ones. If any are largish, put them towards the outside edges.

When finished, remove the rack and dump any excess brown sugar spice mix that has fallen on the foil (so it doesn’t burn in the oven) and put the rack back on top of the sheet tray. Put your bites in a cold oven, turn it on to 350 degrees, then bake for about 15 minutes or until the chicken is just done. Change the oven to broil, moving the tray to about six inches below the broiler, then broil, turning the bites over once after the first side is brown and crispy and continue to broil until the second side is the same. Move pan around if needed while broiling. If your pan begins to smoke, add water to it.

I use a lot of chicken, and my buying hints never change. Know your prices, what are the highs and lows and buy it at the low, which is usually about once a quarter. Since the lowest prices are usually on a larger family pack, divide the chicken into portions your family will use, label and freeze.

Bacon is generally on sale, one brand or another, prior to just about any holiday. It doesn’t take up much room in the freezer, so stock up. The bacon I’ve used is a cheaper thin sliced, one pound with 16 slices. If you shop Aldi, don’t buy their cheapest bacon, it just won’t work well as the cuts are odd, but the bacon that costs just a bit more (but isn’t the thick cut) works better. Turkey bacon is probably not the best choice; part of what makes this recipe work is the fat from the bacon mingling with the brown sugar spice mix to form that caramelized exterior.

I normally don’t buy brown sugar. I just mix up my own, a cup of white, granulated sugar to a tablespoon of molasses in my food processor. It’s a great save if you don’t have brown sugar on hand, and I usually do have molasses, which keeps, literally for years, tightly covered. Just make sure the lid is clean when you put it away or you may never get your bottle opened again. I have a post on Making Homemade Brown Sugar if you’d like to take a peek.

Cover a large sheet tray with heavy duty aluminum foil. Spray both sides of a cooling rack with nonstick spray and place on the sheet tray. Set aside. Sort out about 50 toothpicks. Have at the ready.

Mix together chicken, vinegar, salt, and pepper and set aside.

Mix together the brown sugar, chili powder cayenne, salt and pepper and place in a shallow tray.

Working with one at a time, wrap bacon around chicken, secure bacon with a toothpick, place in spice mixture. When several are in the spice mix, roll around to cover, then with the palm of your hand gently squeeze to adhere spice mix to bacon and shape the chicken into a kind of loose ball. Place on rack and continue. When the rack is full, remove it from the sheet pan and shake any excess sugar from the foil and replace rack over sheet pan.

Place in cold oven and turn onto 350 degrees. Bake for about 15 minutes or until chicken is just cooked through. Set a rack about five to six inches from broiler and broil chicken on one side until bacon is browned and crispy. Turn and broil the second side until browned and crispy. If at any time your pan begins to smoke, add a little water to it.

Sprinkle with green onion or chives and serve immediately.

I’ll be linking Bacon Wrapped Chicken Bites to Fiesta Friday # 281 this week. Stop by and check out the party!