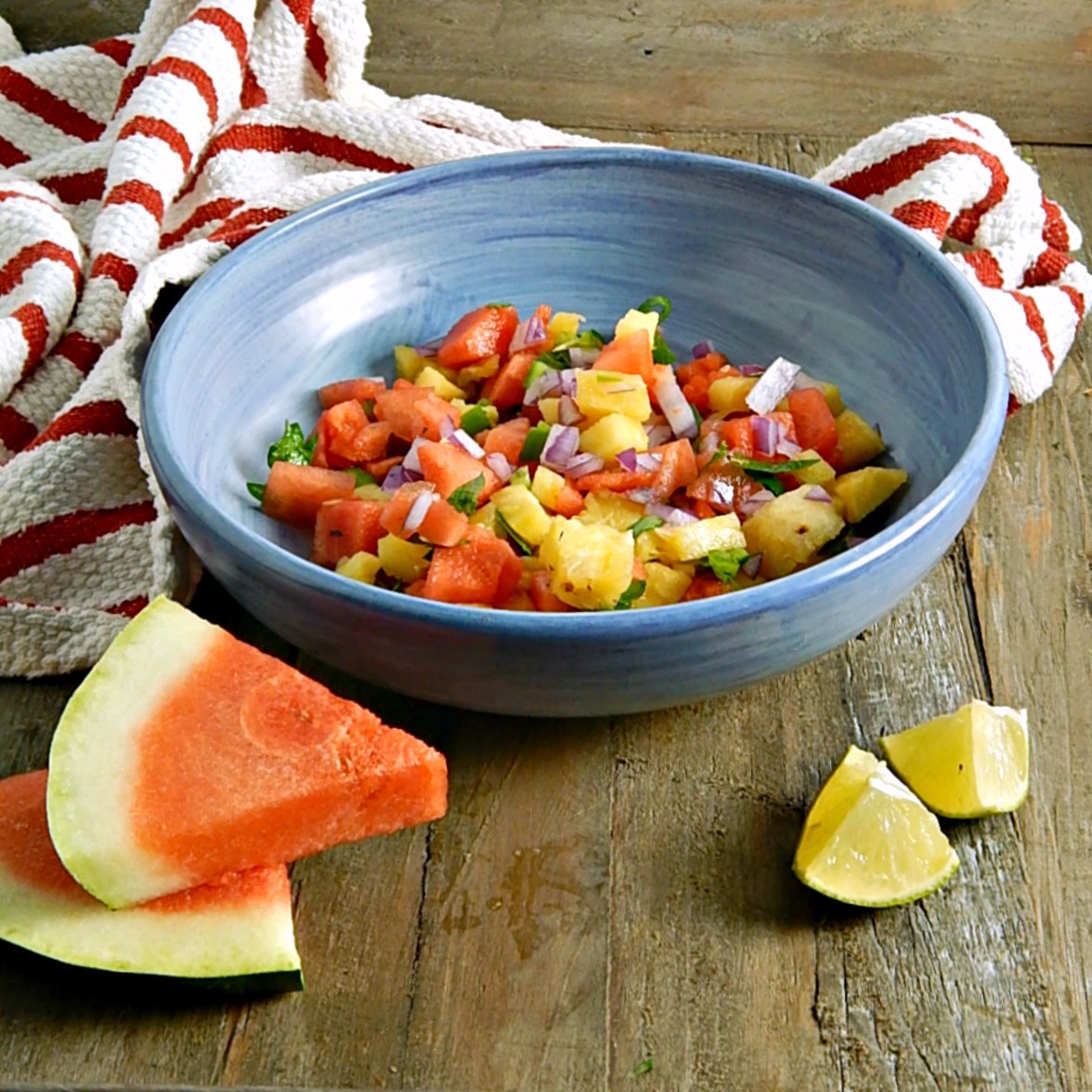 I don’t know if it’s a good thing or a bad thing that watermelon is available pretty much all the time, these days. See, I kind of miss the the anticipation and the risk, waiting until mid to late summer & hoping for watermelon by the Fourth of July! On the other hand, those smaller watermelons I’ve seen at the store are always good, a manageable size and I can have watermelon anytime! They were perfect thing to use for this Watermelon, Pineapple Salsa.

I kind of avoided salsas like Watermelon Pineapple Salsa for a long time. I’ve seen recipes; I mean they’re just all over the place the last few years, but I just couldn’t wrap my head around it. I mean – is it Mexican? Is it Italian? And what would it go with? The whole idea threw me. I’ve made fruity Salsas (find them on my Condiments or Appetizer pages) with Pineapple, Papaya & Mango, but Watermelon?

Then I kinda fell in love with this mix of the watermelon and pineapple along with the crunchy red onions, the bite of the jalapeno with a little basil and lime tossed in. The sweet-savory combination in the Watermelon Pineapple Salsa is just about addictive and I loved the textures in each bite. Watermelon has that very fun texture, almost crunchy but yielding and pineapple is a softer contrast.

And it turns out I didn’t have any trouble figuring out what to do with it. I served it with my Homemade Baked Pita Chips and later, with Crostini. And not just any old Crostini, but toasted Crostini slathered with my Homemade Mascarpone. Admittedly it seemed a bit decadent but what a taste sensation that was!

I think I’d love Watermelon Pineapple Salsa over Crostini spread with Ricotta, too. Or how about sprinkled with Feta? Who knows, maybe I’ll try the Salsa with tortilla chips, sometime, just to take this salsa more towards the Mexican side.

This is an easy Salsa to toss together. If your watermelon is super juicy, chop it and strain it for a little while so the juices don’t water all the other flavors of the salsa down. When it’s done, let the Watermelon Pineapple Salsa sit for a bit for optimal flavor.

Just a note on the Crostini – my go-to method includes brushing my crostini with olive oil – if you’re serving your crostini as I did, with the mascarpone (sooo goood!!) the olive flavor comes through. Use a neutral oil or don’t use any. I think that olive oil flavor would be marvelous with ricotta though, because it would complement it beautifully.

Watermelon is usually feast or famine at my house. I know you can buy the precut watermelon, but it’s never as good and extremely pricey for what you get, usually, 4 to 10 times as much if the $ per pound is worked out. And that’s including the weight difference due to the rind. Smaller watermelons are at the store, but it’s still a lot for me to use up. I do have a few tricks up my sleeve (like juicing some for agua fresca & a cocktail, coming soon.

When you buy a watermelon, look for them on sale during the peak of the season and pick one that seems heavy for its size. That’s more important than color or minor blemishes. Turn the melon over. The blotch on the bottom (where the watermelon rested on the ground) should be creamy colored not an anemic white. Give it a thump. The watermelon should sound hollow. You can hone your skills by comparing the sound of the watermelon you’ve picked with several others especially if you’ve spotted one with an anemic white splotch. Pick up several, notice the weight for the size, thump them. When you cut watermelon, use a clean knife and a clean counter or board and it will last longer in the fridge. A large rubber band will easily hold any plastic wrap in place.

Pineapple can be super pricey or surprisingly cheap depending on when and where you buy it. I love picking them up for a song at Aldi and where I live in Minnesota, they’re often cheaper in the winter, but look for Pineapples on sale around holidays.

If watermelon is very juicy, place in a strainer over a bowl and allow to drain for a half hour or so. Mix all the ingredients together. Best if sits for about 30 minutes before serving.

Cut bread thinly on the diagonal. If desired, brush with olive oil or a neutral oil. (If spreading crostini with ricotta, use olive oil, if spreading with mascarpone, use a neutral oil.) Crostini may be toasted on the grill, on a hot skillet for in the oven. If using an oven, move oven rack to about 5 inches below the broiler and place crostini directly on the rack. Broil until lightly browned, then turn crostini over and brown the other side. Watch closely with all methods to prevent burning.

To assemble, spread cooled crostini with ricotta or mascarpone cheese. Sprinkle with Watermelon Salsa. Sprinkle with salt and pepper. Serve shortly after assembly.

——————————–
Since I forgot to share last week, I’ll be sharing my Watermelon Pineapple Salsa this week at Fiesta Friday #277. Thank you to the co-hosts this week, Diann @ Of Goats and Greens and Jhuls @ The Not So Creative Cook.