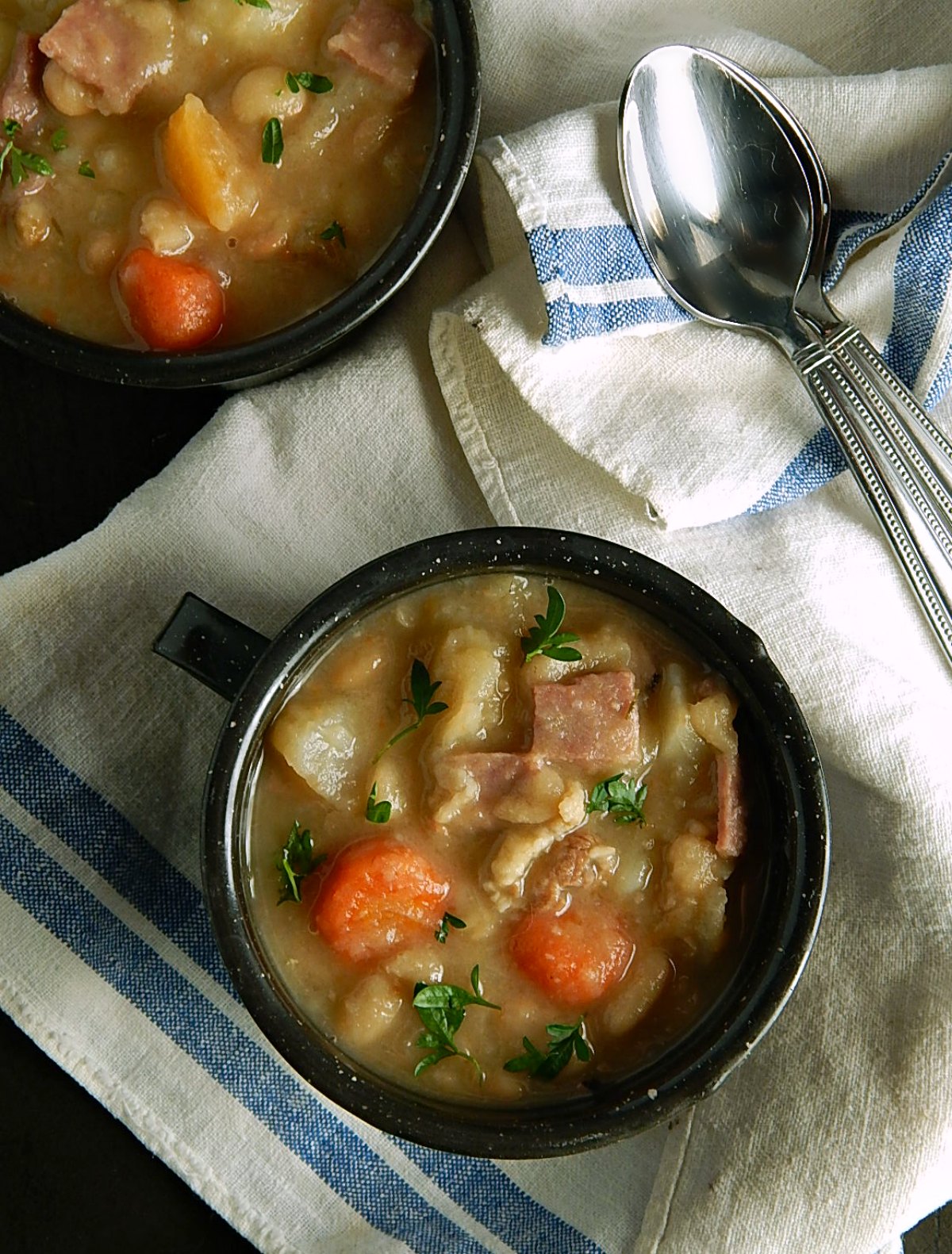 When I first heard of Gabure French Bean Stew, I just knew I had to try to make it myself. I can get pretty excited by a recipe, even if it’s for something I’ve never heard of or tried before. Gabure is one of those recipes. You’re not alone if you have to ask what Gabure is! At least I had to ask. Ask my friend, Google, that is…

Gabure is a perfect use for your holiday ham bone, a thick hearty stew of ham, beans, and root vegetables. It’s the kind of recipe that’s great on a winter day after your Thanksgiving or Christmas ham. And it’s the kind of recipe that’s great after an Easter ham if you’ve been having the same wet, bone-chilling Spring weather we’ve been having up Nord here in Minnesota.

Gabure is comfort food at it’s best; inexpensive, slow-cooked and it just gets better with time. According to Musette de Jour, “Traditionally, a Gabure would always be on the hearth in Gascony households of last century, being eaten from and added to each day as the flavours intensified and developed as the casserole continued cooking.”

Today, of course, most of us don’t cook like that, but I can almost imagine it as I tasted this hearty soup. According to Musette de Jour, the word “Gabure simply means ‘made with lots of different vegetables’… and the recipe can vary from village to village.” Given that, I didn’t see any issues with just adding the vegetables I like to cook with the most, onions, carrots, rutabaga, cabbage and potatoes. You can choose what you like for you. Turnips, parsnips, and leeks would be good options, too.

And while many Gabures are made with confit of duck, others are made with pork or ham, and of course, you know this one is made from my holiday ham bone. With the melange of vegetables, having a good stock is really going to be key to having a great Gabure. Don’t skimp on the ham or the ham broth and you’re going to have something really special.

Whenever you cook with dried beans, timing is always going to be a variable. I suggest brining the beans first, something that isn’t so traditional but will give you the best beans, evenly cooked and flavorful and knock off some of that cooking time. See my post on Brining Beans Instant Pot or Stovetop.

Give the beans a good head start (you’ll want to make this stew when you’re around, maybe starting it after lunch and tending it now and then) along with the ham bone, then when they’re soft, but not quite finished, you’ll start adding in the vegetables at the appropriate stages.

There’s not too much to the making, other than the amount of simmering time, and a little stirring now and then. All the vegetables are in a larger dice, so the chopping is easy. Just keep it at a gentle simmer, give it a stir now and then, and it will be done when it’s done. And that’s when beans and veggies are tender, the ham is falling off the bone and ready to be shredded, the meat added back to the pot, and a spoon, when placed upright in the center of the pot, stands straight up.

When serving, cheesy toasts or “croutons” are traditional, as is a splash of wine in the bowl; a red wine vinegar is good, too, giving a little brightness, if red wine isn’t a choice for you.

While Gabure French Bean Stew can be made by simmering a ham bone with the beans, I usually find if If I make Ham Stock by itself, I can usually get more than one soup out of my ham bone. So if you’re frugal like I am, make the ham stock and use part of the meat from the bone and part of the stock for the soup and use the rest for something else. You can make my Best Ham Stock on the stove or in the instant pot.

It might seem a bit cliche for a frugal blog to put out bean recipes – but they really are a cheap way to fill you up and a great source of protein. See what the World’s Healthiest Foods has to say about the lowly white bean; it might surprise you! Rinsing and brining or soaking does help with some of the known issues with beans, but the best defense? Eating them regularly. Unless you have special issues, your body will adjust.

Root vegetables are really some of the most inexpensive. I generally find they’re less per pound if bought in larger bags. If your family is smaller, Gabure French Bean Stew freezes well. Just divide and freeze half upfront, before you get tired of it! You’ll want it or any large dish like this, more if it’s not sitting around, languishing in the fridge.

Gabure French Bean Stew is a great use for your holiday ham bone – slow-cooked comfort food, this is a melange of ham, beans, and vegetables!

Add bacon to a large stock pot or Dutch oven, turn heat to medium-high and cook until rendered but not crispy. Add in the onion, celery, carrots, and garlic and continue to cook until softened and starting to pick up a bit of color, 15 minutes or so.

Add the beans, ham bone with water if using or stock if not using ham bone, and thyme. Bring to a boil, turn down to a simmer and slowly simmer, uncovered, until beans are nearly softened. Timing will vary, an hour or so, maybe a bit longer.

Add in the rutabaga, turnips and/or parsnips and place cabbage on top of the soup without stirring in. Continue to simmer for another hour or so, until beans are tender, stirring once about halfway through to incorporate cabbage.

When beans are tender, add potatoes, parsley, and ham (if not using ham bone) or if using a ham bone, remove from soup, shred off the meat and return the meat to the pot. Simmer another 30 minutes or so until potatoes are tender. Taste broth and add salt and pepper as desired.

Add a splash of wine to your bowl or a teaspoon or two of red wine vinegar to brighten, if desired, when serving.