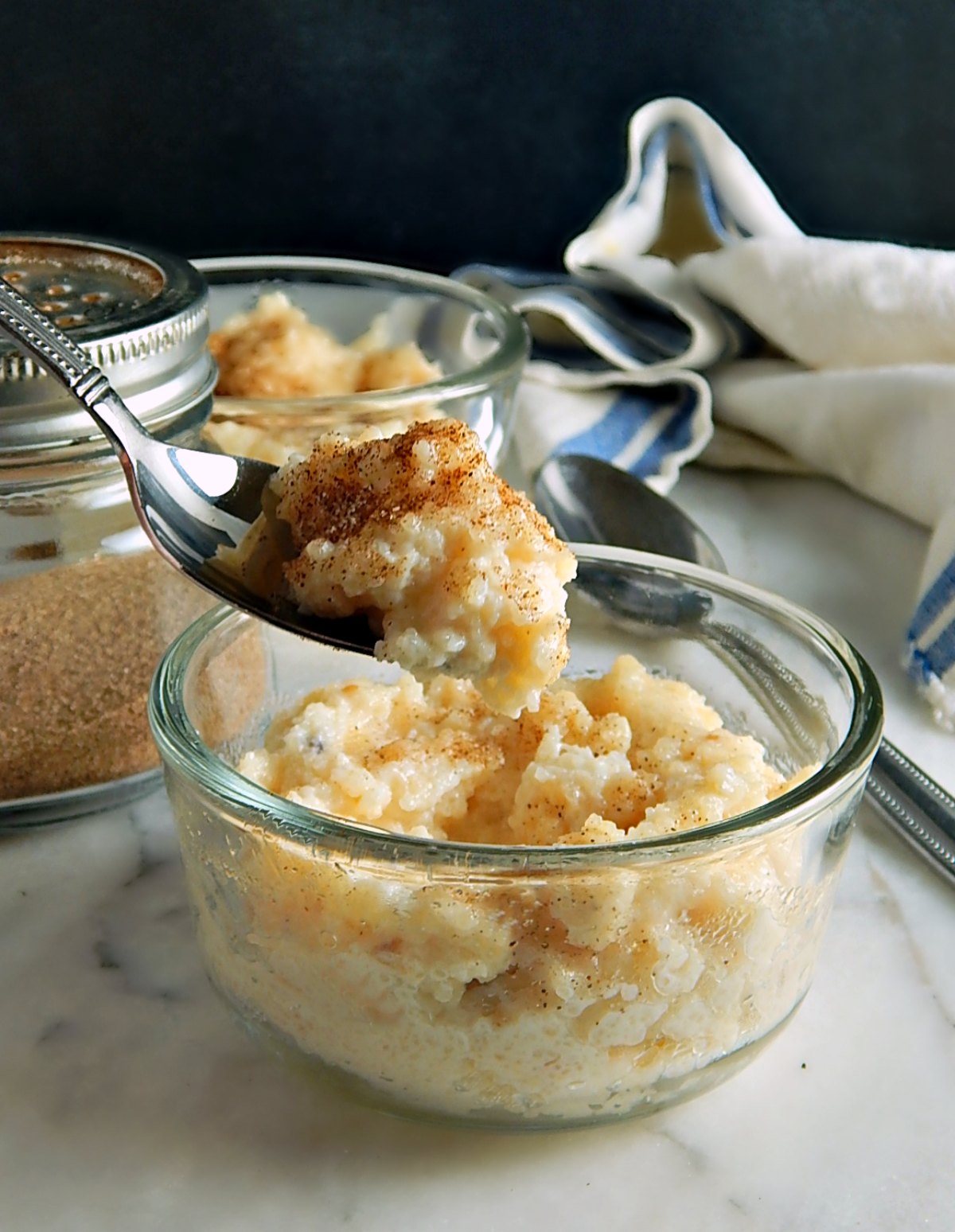 A few weeks ago, Anna commented on my recipe for Horchata and asked where the recipe for my Horchata Arroz con Leche (Rice Pudding) that I promised to post was. (Anna, I hope you’re following so you see this, and sorry for the delay!) Horchata, if you’re not familiar, is a Mexican Aguas Fresca, a cool, creamy, cinnamony rice-based beverage. It’s so much better than it sounds; it’s absolutely delish, refreshing but with a little substance.

When Horchata is made, rice is soaked with water and cinnamon and then blended (although some recipes use almond, mine doesn’t), and when it is strained, you’re left with the “dregs” of the rice. Since this is a frugal site and I’m frugal, it stands to reason I’m not down with the waste, even if it is just 1 1/3 cups of broken down, wet rice. Besides, that soaked rice makes some of the best, richest most decadent rice pudding you’ll ever taste!

When I was a child in school, there were two things to look forward to, recess and lunch. While the white-capped ladies behind the lunch counter did a fantastic job, there was one thing that without fail struck icy cold dread straight into my heart. Rice pudding. Always, I was suspicious of the bland, gelatinous, quivering mound that just held the shape of the scoop that was used to serve it with. A dusting of cinnamon did nothing to improve it. This is NOT that rice pudding.

Instead, wrap your mind around an utterly dreamy creamy, custardy, cinnamony pot of deliciousness! Heck, it doesn’t even taste like rice. Not in any obvious way. There’s just a bit of texture from any bits of rice that haven’t broken completely down, but otherwise, it’s smooth and rich and thick. I like to serve my Horchata Arroz con Leche (Rice Pudding) warm, with a sprinkle of my Homemade Cinnamon Sugar, but it’s just about as good chilled. Add raisins if you want – sometimes I do, sometimes I don’t.

Come along with me on this journey that’s going to span continents and cultures and I promise you, this rich and creamy Horchata Arroz con Leche (Rice Pudding), will be the Rice Pudding you are going to dream about. It will be the rice pudding you look forward to with the fierce anticipation of a child!

I’ve culled from more than one culture in the making of Horchata Arroz con Leche (Rice Pudding). The condensed milk and cinnamon are pulled from a traditional Arroz con Leche, the eggs and milk from a standard American or English Rice pudding. And the technique? A combination of both.

There’s really two recipes here, one is a more basic pudding that is often made by Mexican and Latin American cooks. I think of it as kind of a Cream of Rice because it reminds me of the Cream of Wheat my Mom used to serve for breakfast. I’ve included that recipe, below, too and in the photographs, it’s the one with the raisins. You can see the texture is a bit different than the richer dessert pudding, the Horchata Arroz con Leche (Rice Pudding).

The second recipe is the Horchata Arroz con Leche (Rice Pudding) and it starts in much the same way as the Cream of Rice version, by cooking those dregs of rice in water to soften and cook through. Then all the good stuff is added that takes that Cream of Rice pudding type substance to a whole different direction – to the Horchata Arroz con Leche (Rice Pudding).

This rice pudding is sweetened with condensed milk. I’m not a huge fan of a lot of sweetness, and I like about a quarter of a can; you can choose your level. Add the quarter of can and taste and add more if you want. I never worry about a little leftover condensed milk in my fridge because I love making these easy Pumpkin Spice Lattes and make them fall and winter and in the summer I make Frozen Coffee Frappes. You’ll need to freeze some coffee for those, so plan ahead.

As long as you take care not to scorch the rice, this recipe is pretty straightforward. You’re going to want to use some good judgment towards the end, though, in deciding how thick you’d like your rice pudding. Some like it on the thinner side; me? I like it thick and substantial.

The starchiness of the rice will always be a variable, depending on how long it’s soaked and how finely it gets broken down, so take that into consideration, and take into consideration that this pudding thickens as it cools. And it does thicken quite a bit. (If it is too thick at any point, gently heat with a little milk and as it softens, whisk in more milk.)

The thicker and denser the pudding is, the less the volume there will be. The number of servings can remain pretty much the same, but if the pudding is thick and dense, the actual serving size will be smaller. The richness balances out the size, and a good thick pudding is best in smaller amounts, anyway.

Horchata Arroz con Leche (Rice Pudding) is made from the rice leftover from making Horchata. These little puds are unbelievably creamy & rich!

Note on the rice:

Add rice and water to a large, heavy saucepan, stir and bring to a boil. Reduce to simmer and gently simmer, stirring now and then at first, and almost continuously toward the end. Cook until most of the liquid is absorbed and mixture resembles cream of wheat.

Mix milk, eggs, condensed milk, and salt in a bowl, whisking well. Gradually add to the rice mixture, slowly at first, whisking well to avoid lumps. Make sure to get into the corners of the pan. Bring to a boil and turn down to a good simmer, stirring often. Cook for several minutes, until the back of a spoon leaves a distinct line when a finger is drawn across it and any pieces of rice are soft. Be prepared to add more liquid, milk or water if the pudding has thickened but the rice is not yet soft.

Remove from heat and stir in vanilla. Add raisins, if desired, when pudding is finished.

If you don’t wish to cook the full pudding, but wish, instead, to make a simple pudding for breakfast or dessert, start off with the rice and instead of using water, use milk. You’ll likely need about 3 cups of milk for this amount of rice. Simply cook until almost all of the liquid is absorbed, stirring constantly toward the end of the cooking process. Taste the mixture, and if the rice is not yet cooked through, add a bit more milk and cook for a little longer. Add sugar or condensed milk as desired. Serve warm or cold.

I’ll be sharing this marvelous rice pudding at Fiesta Friday #270,  cohosted this week by Jhuls @ The Not So Creative Cook and Angie @ Fiesta Friday.