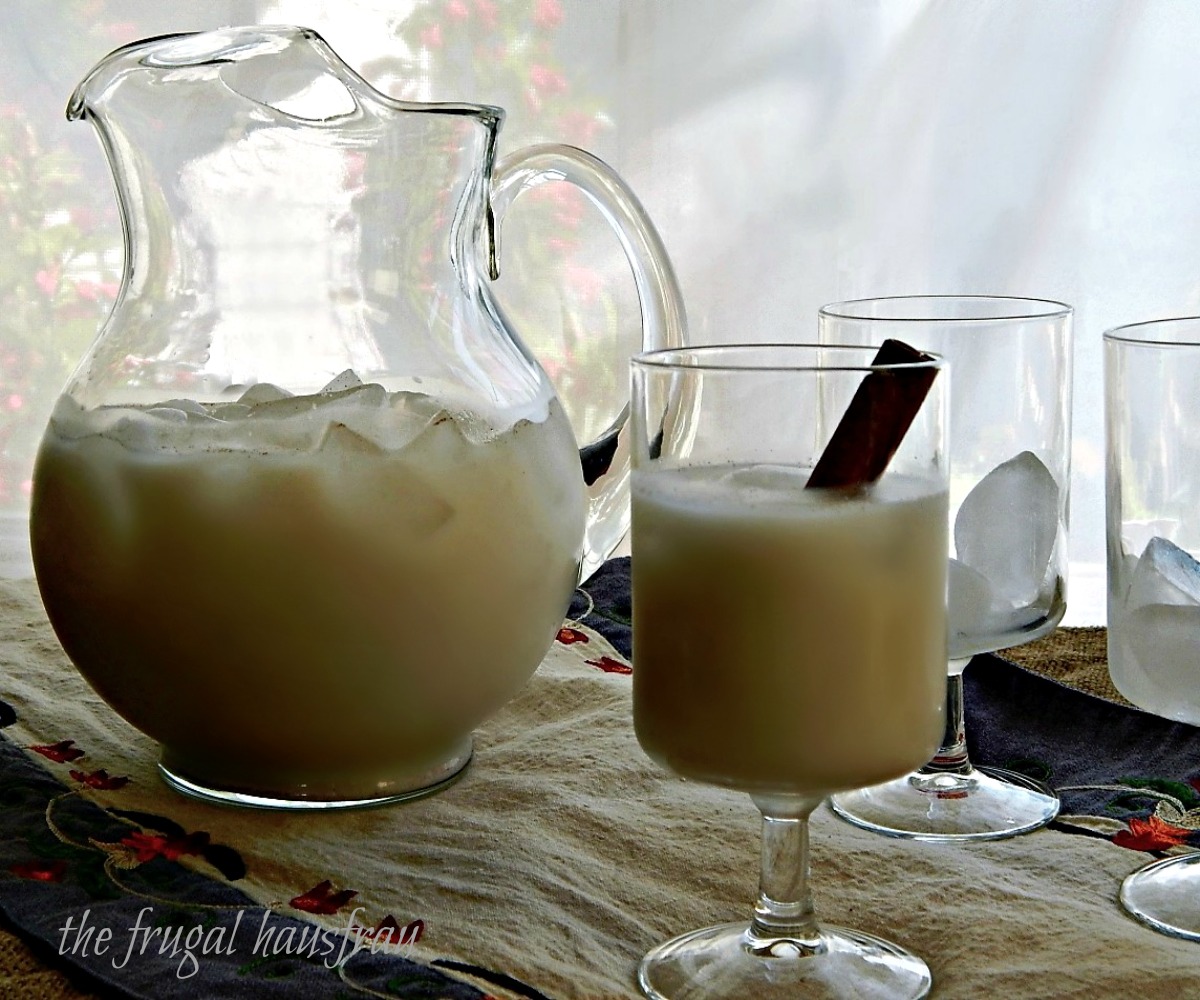 I was introduced to Horchata Mexican Rice Drink, Horchata de Arroz (glad to meet you!) late in life, which is a bit of a shame as it is the perfect thing to drink with Mexican food. (Well, other than Margaritas.) Horchata is cool and light, barely sweet, and this is my version.

Yes, please, I will have some Horchata!

After my initial introduction to Horchata, I went on a bit of a spree, sampling Horchata whenever I saw it on a menu and trying various recipes at home. I was looking to recreate that very first Horchata; like a first love, innocent and pure, it was hard to duplicate. So often, the simplest of things are!

Horchata, if you’re as unfamiliar as I was, is a traditional drink, an Aguas Fresca, made in Mexico and Latin America as well as other places around the globe. There are a lot of versions, but here in the States, you’ll usually find Horchata de Arroz, and it is generally made with rice, cinnamon, maybe a bit of milk and some type of sweetener.

There may be almonds in some versions of Horchata de Arroz, but I highly suspect the versions I’ve had from various restaurants and taquerias are made just with rice. Simple and inexpensive.

And while Horchata is easy to make with just a few common ingredients, there’s a nice balance with a really good one, that plays back and forth between tasty, refreshing, barely rich and slightly sweet all accented by the cinnamon. If you’ve sampled enough Horchata you’ll recognize the magic when it’s just right.

Yes, please, I will have some Horchata! Horchata Mexican Rice Drink

Not to say you can’t play with this recipe and add more or less cinnamon, more or less milk and more or less sweetener to taste – after all we all have our own preferences. This is one of those recipes that you might want to try as is, and then adjust a bit if you’d like, which is easy enough to do.

Horchata is easy to make, but is a process and takes time. You’ll blend up rice in the blender, add water and blend it again, then let it soak for about 12 hours with several cinnamon sticks; overnight is great. Then the cinnamon is removed (if you want to use the resulting rice) and the rice mixture is blended yet again with a bit more water. That mixture is dumped through a strainer, then the last cup of water is added to the blender to help get the rest of the rice out and that’s added to the strainer, too. Then there’s more straining, detailed in the recipe and only then is the touch of milk and sugar added.

It all seems very straightforward, and it is, but let me tell ya, that rice can be a pain to strain. Over time I figured out an easy, frugal and no mess way to strain that rice, a three-step process, that saves time, energy and cheesecloth. I detailed it out in the recipe but strain it however you’d like.

Horchata is really cheap to make, especially this simple rice version. I’d estimate a pitcher for about 25 cents or less! And if you use the leftover rice for rice pudding, you’ve saved that cost. Bonus.

The recipe uses 1 1/3 cup of rice so it’s really no biggie if you don’t repurpose that strained rice, but I like to for two reasons. First, I don’t like the waste, and second, that soaked and broken down rice makes some of the best rice pudding you’ll ever have! Check out my recipe for Horchata Arroz con Leche (Rice Pudding) for some of that heavenly deliciousness!

Yes, please, I will have some Horchata! Horchata Mexican Rice Drink

Add rice to blender and pulse several times. Add about 1 1/2 cups of water, blending to break up the rice, then add another 2 1/2 cups and blend again. Four cups of water, total, are in the blender at this point.

Lay cinnamon on a protected surface and break up with a heavy object into small chunks. Add to the rice mixture. Either pour into another container or simply set the blender cup in the fridge. Leave for about 12 hours.

After the resting period, remove the cinnamon then blend again, then begin the straining process. Reserve the solid bits for the rice pudding. The easiest way I’ve found to strain is to use a three-step straining process, primarily because I don’t like to waste cheesecloth, nor do I have the patience to scrape and facilitate straining once the cheesecloth becomes coated with the mixture.

Add sugar and salt to milk in a small, microwave-safe container like a Pyrex measuring cup – heat for a moment, then stir to dissolve sugar. Add to the Horchata. Refrigerate the Horchata for another hour or so, then pour over a generous amount of ice and enjoy.