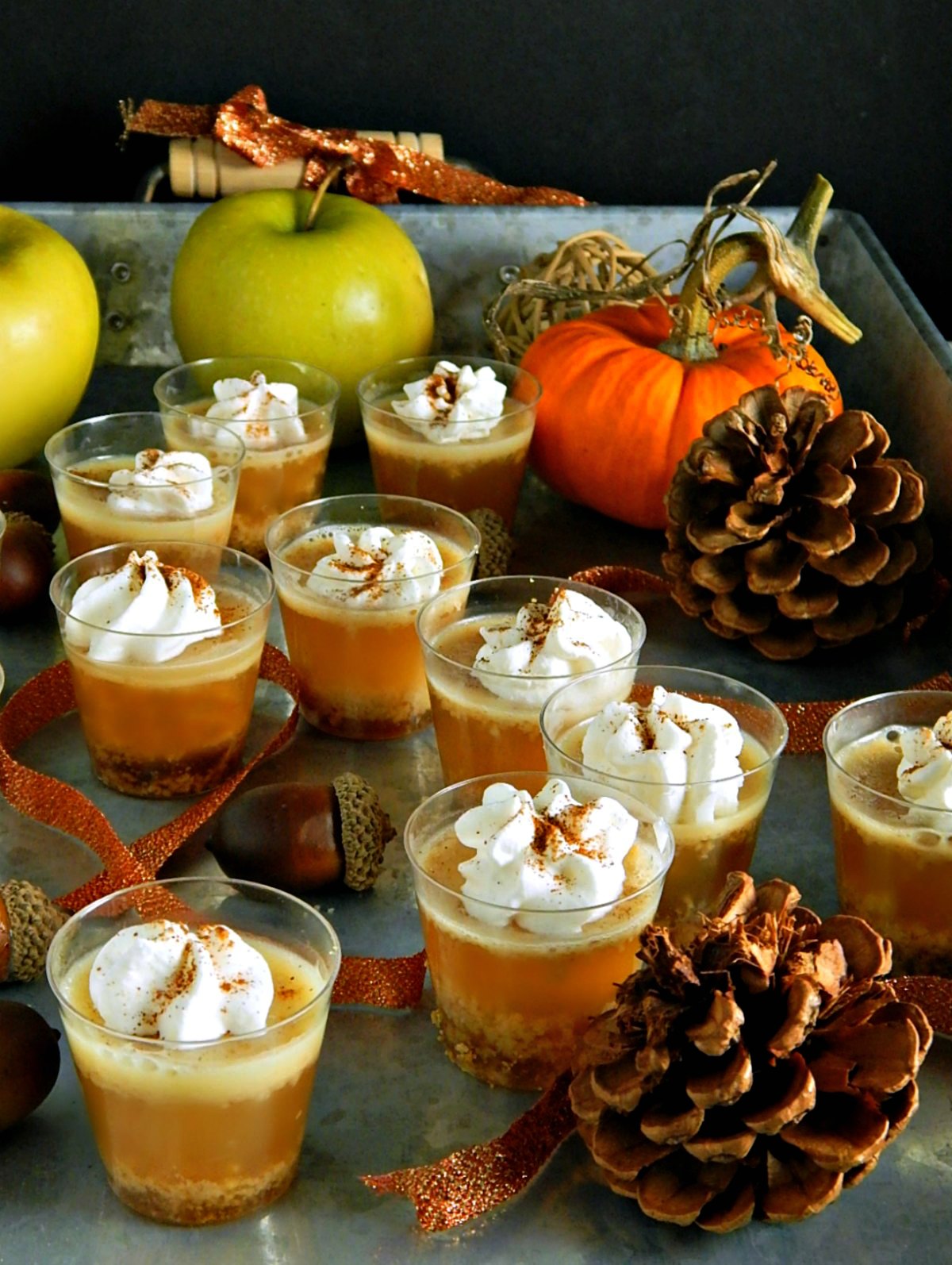 Well, as you can see, I’m still in Halloween Party mode and as Halloween gets closer & closer, my treats are getting easier, faster and more doable! But they’re still every bit as delish and fun! Take these very fun Caramel Apple Pie Jello Shots, for instance…

Way back in the day, when I was young (and yes, we did walk through blizzards to get to school, lol, and yes I was young, once upon a time back in the day) we didn’t have much in the way of Jello Shots. I remember seeing them once at a party but wasn’t too impressed and never had a “recipe” like this one for Caramel Apple Pie Jello Shots. Can you imagine? A life where I had to walk through blizzards and only had sub-par jello shots with no recipes?

These little jello shots are a lot of fun and taste delish and are still relatively low effort and quick to make. They have booze, yes, a little graham cracker crust just for fun, a bit of caramel for sweetness, a hint of Apple Pie Spice and then a garnish of whipped cream, with maybe a drizzle of caramel.

As the Caramel Apple Pie Jello Shots set up there’s a bit of a separation; some of the caramel tends to float on the top, and unfortunately, not in a pretty, attractive layer. That’s why the garnish is pretty essential and of course, whipped cream is your easiest option. Plus whipped cream and pie? Yes, please!

When I seized upon the idea of an apple pie jello shot, I googled. And I found so much misinformation on making such an animal. I’d love to do a series of comprehensive posts on jello shots, lol! But that’s going on my someday if ever and probably not anytime soon list of projects for sure. I mean how many jello shots can a girl make and/or consume? Maybe I just need to have more parties? In the meantime, I thought I’d focus just on this particular recipe, Caramel Apple Pie Jello Shots.

The crust is super easy to do. Melt butter and mix with sugar and graham cracker crumbs, then add it to the bottom of the little shot glasses. First I put all the shot glasses in a big pyrex pan, and it held all but two, nice and snug. I had a small teaspoon scoop and used about a 3/4 teaspoon per shot glass. No need to be exact, and you might have just a few crumbs leftover. Better a little extra than to run short. Then I took a second little shot glass and pressed down the crumbs, nice and tight and slid them into the fridge to harden while I mixed up the jello part of the recipe. Just a note: make sure you have enough crumbs in each shot glass so they actually get tamped down or else they’ll float.

I’ll talk more about the alcohol, below, but when pouring, it’s helpful to transfer your apple cider/booze/jello mix into a measuring glass with a spout. I used a teaspoon in one hand and placed it into the little shot glass and then poured the mixture onto the teaspoon so I wouldn’t disturb the crust. Kind of like you’ll see a bartender make a layered shot. A little of the crust still floated but it was a big improvement over just pouring the liquid right on the crust. If you want, you can use a toothpick or spoon to pop any bubbles that come up to the surface. We’re garnishing so that’s not really much of an issue.

When garnishing, you really want a “stabilized” whipped cream, but honestly, a can of Reddi Whip is going to be your friend, here. It always pains me to say that because I’m a blogger and I like everything homemade, but there’s a limit, right? I think a little sprinkle of Apple Pie Spice over the whipped cream looks nice. If you use stabilized whipping cream or reddi whip, you can garnish ahead, but if you’re transporting Caramel Apple Pie Jello Shots, you probably will want to just bring them ungarnished and squirt the whipping cream on once you’re there.

Measuring doesn’t have to be perfect, just make sure there’s enough to tamp down.

Use a second shot glass to tamp down the crumbs.

There’s Jello and then there’s Gelatin and we’re talking Gelatin and in this case, Knox Unflavored Gelatin. Look for it where the jello is, probably on one of the upper shelves or just off to the side of the jello packages. It’s small, about three by four inches.

Usually, Knox Gelatin comes with four envelopes inside. The total amount of gelatin in the box is one ounce and each envelope has a quarter ounce. Each of those envelopes will gel 2 cups of liquid to the consistency of jello. If you’re wanting to make a really stiff jello shot that stands up on its own and can be cut super cleanly, the proportions of gelatin to liquid in this recipe will need to be changed just a bit. And varying the amounts of any ingredients (like adding more booze) will change the way this gels, too.

You’ll want to prepare the gelatin in just a little of the liquid, and it has to be heated, either on the stove or in the microwave, then you’ll add the rest of the liquid. This fussy little step is a bit of a bonus; just heating up the small amount of liquid means you don’t have to wait for all of the apple cider cool down before you add the alcohol. It’s going to be ready to go right after the rest of the apple cider is added. So that brings us to the alcohol in the recipe.

I used Vodka because I wasn’t interested in masking the apple flavor in my Caramel Apple Pie Jello Shots, but after I was all done, I thought a little rum would have been very good in these, just a little because the fall flavors of caramel and apple and the warm spices all go together so good with rum. I haven’t tried adding any rum, but spiced rum might be good, too. I’d go with a quarter cup or so of rum and the rest vodka to start.

A bit of fireball or cinnamon liquor might be good. Or maybe even an apple-flavored vodka could be used. Do they have caramel vodka? I just don’t hang out at liquor stores enough and haven’t kept up on all the flavors these days!

Caramel Apple Pie Jello Shots do have a bit of a strong flavor, but it will take quite a few to get drunk from them. A standard shot size is 1.25 to 1.50 ounces of a single alcohol. These hold about .75 ounce of the alcohol cider mix, which means each shot has a quarter of the .75 ounces, which is .1875 ounces. Are your eyes rolling, yet? So to get to the same amount as 1 standard US shot of a single alcohol, you’d have to have 6 1/2 to 7 Caramel Apple Pie Jello Shots. Which isn’t a serving suggestion, lol, but I do want you to not be either afraid of them or too indulgent.

I just used 1-ounce plastic shot glasses I picked up at the grocery store a while back; there were 50 in the package. I wish I would have had shot glasses that are a little more flexible, something along the lines of these on Amazon. Having a container that has just a bit of flexibility makes it a little easier to consume the jello shot because you can kind of squeeze it as you’re eating it.

While jello shots are fun, fun, fun, they are definitely not sexy and anything you can do to make it easier for your guests to eat gets you bonus points! You might even want to serve little plastic spoons with these shots.

Of course, varying the size of the containers affects the amount this recipe will make. This same recipe can be used to fill small pie shells you can buy, too. You’ll fill them and then slice them, but I haven’t done any measurements on this.

If you’re making Caramel Apple Pie Jello Shots around a holiday, you’ll likely find everything you need on sale, including the alcohol. Sign up for email alerts for your liquor store coz there’s really no need to be paying full price.

I haven’t ever actually compared how much graham cracker crumbs are as opposed to graham crackers. Actual graham crackers go on sale more often and may have coupons and if you don’t want to do baking in the future you might not want a box of crumbs around. I happen to love graham crackers so I’d rather not have them around because I’ll eat them, lol, which I won’t do if I just have crumbs. So there ya go, pick what works for you.

I don’t know if I’ve ever seen Knox gelatin on sale – but it does last forever. The “use by” date on mine is a couple of years out and I’ve used Knox that was several years old before with no issues. So even if this is a “one-off” recipe for you and you have no other need for gelatin, just stick it in your cupboard and you’ll have it if you want to do jello shots again.

Make the crust: Add graham cracker crumbs, sugar, and butter to a small bowl. Mix. Set the shot glasses in a baking sheet or some other similar container. Add about 3/4 teaspoon to the bottom of each, making sure there is enough in each to tamp down (if using another sized or shaped shot glass, the amount of graham cracker crust needed might vary). Using another shot glass, press and tamp the crumbs down to form a layer. Place the shot glasses in the fridge to set while preparing the Apple Pie portion.

In a small saucepan or microwaveable container, add about 1 cup of apple cider. Sprinkle with 2 envelopes of Knox gelatin. Let stand for one minute.

You’ll know the gelatine is completely dissolved when there are no visible granules remaining. Splash a little bit up against the side and check. No granules? You’re ready to go on with the recipe.

Add the remainder of the cider, vodka and apple pie spice. Stir and transfer to a container with a spout. Pour a little into each shot glass by placing a spoon in the shot glass, and while holding, pour the jello mixture so it hits the spoon rather than the crumb crust. The mixture will need to be stirred from time to time; the spices will settle.

Refrigerate until firm, about an hour. Garnish with a little whipped cream and a sprinkle of cinnamon.