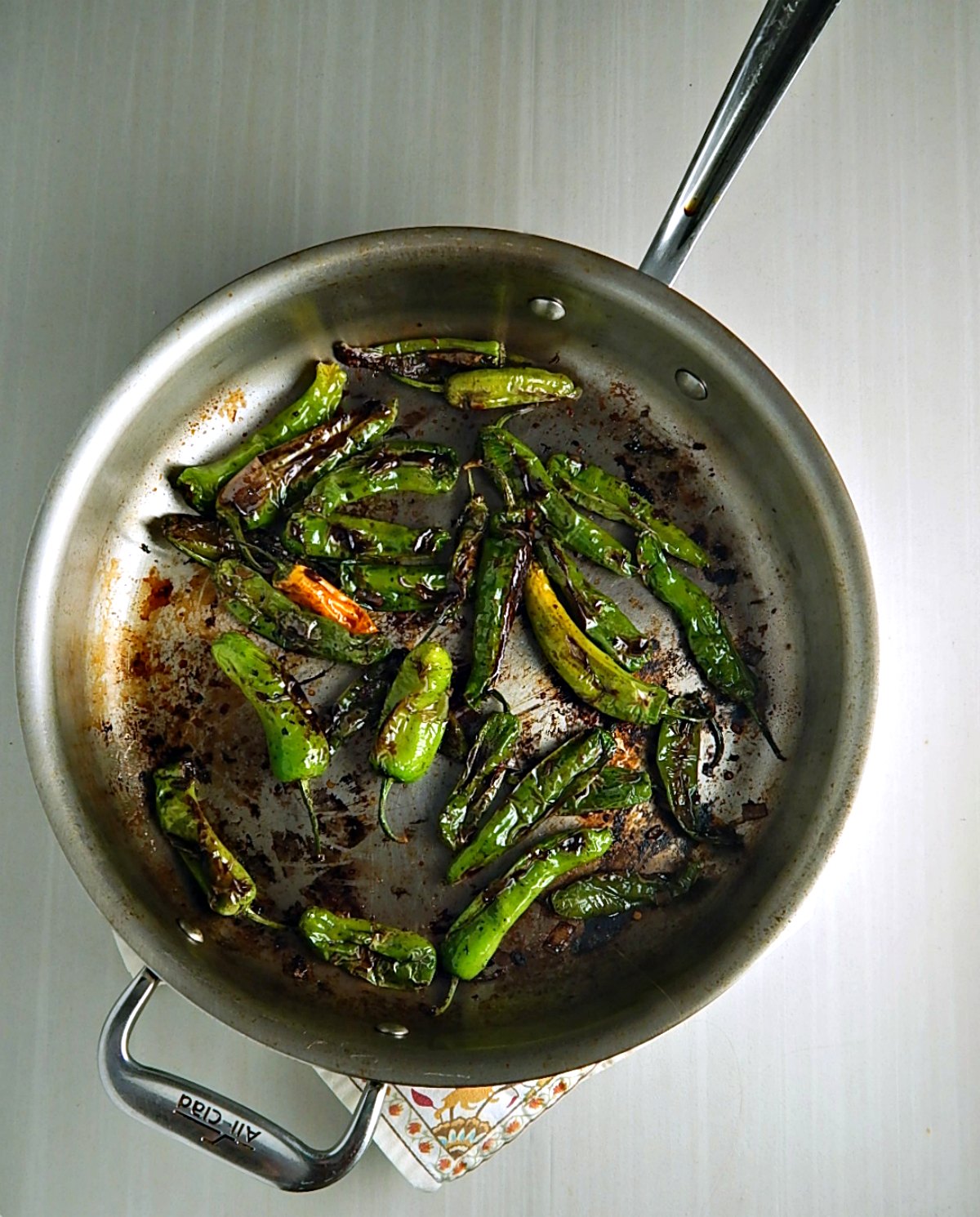 Have you tried Shishito Peppers yet? Have you heard of them? I hadn’t until my Step Sister Pam visited a while back and raved about them. I was determined to try them as soon as I was back in the Twin Cities but completely forgot until I saw them at Aldi, of all places. So I brought them home and made Shishito Peppers with Sriracha Mayo Dipping Sauce.

Of course, as soon as Pam mentioned them, I started seeing Shishito Peppers everywhere on the internet, in food magazines, etc., so you might find them in your store (I know Trader Joe sells them but I try to stay out of there; I just find too many things I want to buy.)

Shishito Peppers are small, shiny green peppers, about an inch and a half to two inches long. They have a very mild flavor and they’re not much spicier than a bell pepper although it’s said about 1 in 10 or so will be a bit spicier. I didn’t find that to be true in my batch. You eat them, seeds and all, by picking them up by the stem end and biting off the pepper, leaving the stem behind. They’re the perfect little finger food appetizer and it doesn’t hurt that they’re pretty, fresh, healthy and easy to make.

As soon as my first batch of Shishito Peppers was done, I knew I wanted to do something just a bit more with them. The next time, I whipped up a batch of my Asian Dipping Sauce (It’s so good, and a super-easy five-minute thing to make) and poured it right in the pan with the blistered peppers and let it all caramelize. Now that added a lot of Asian-y flavors and just a touch of heat. Deeeeelicious! (I use the Asian Dipping Sauce for a lot of things, and you probably will, too, once you try it. Don’t be afraid to make up a small batch – it keeps just about forever in the fridge and just gets better and better as it sits.)

A quick dipping sauce just gilds the lily. My Sriracha Mayo Dipping Sauce was a mistake. I was going to mix up a little mayo and some Sriracha. Somehow, I had two different kinds of Mayonaisse in the fridge, one with just a little left so I finished that up and then added a little more from the other jar. Then I added the Sriracha. At the first taste, I realized I had added a horseradish mayonnaise. The sauce was amazing, and I’ll think about horseradish in the future, but next time, maybe I’ll add a touch of wasabi powder, instead. In the meantime, I’ll probably serve this little Sriracha Horseradish Dipping Sauce when I serve other things, too. It’s a fun combo of flavors.

If you don’t want to go with the Sriracha Mayo Dipping Sauce, consider going with a dipping sauce that’s a little sweet, like this Apricot Dipping Sauce. It has some classic Asian flavors and it is super quick and easy, too.

Shishito Peppers with Sriracha Mayo Dipping Sauce are super easy to make. Unlike a lot of peppers, there’s no need to roast and skin, as you eat them skins and all. I have seen it mentioned that the peppers should be pierced with a pin before cooking or they could burst open. I didn’t do that and didn’t have issues. (Maybe if the peppers are super fresh it could be an issue so use your judgment.)

Shishitos take a bit of time to cook because you want to blister, not burn, the peppers and as you can see, they’re all a bit curved and bumpy. Just add a bit of oil to the pan and keep shaking them around and turning them over and be patient. It will take about 10 minutes, maybe a little longer to get the Shishitos nice and blistery. Then when they’re done, but still a little crisp-tender, add the Asian Dipping Sauce (it’s going to sizzle violently in that super hot pan) and immediately stir those Shishito Peppers so they all get a nice little coating and continue to cook until the sauce is almost completely gone and caramelized.

Serve your Shishito Peppers warm or at room temperature, which by the way, makes Shishito Peppers with Sriracha Mayo Dipping Sauce and ideal party or potluck food! Just watch the sauce, which is Mayonnaise based and can’t be left out for too long.

For once, here’s an item that I don’t have much to say about saving money on! Shishito Peppers aren’t widespread or popular enough, at least where I live in the Twin Cities, to generate any sale prices. They’re in season in late summer to fall, so that might be the best time to look for them. And if you have an Aldi near you, check there.

As far as the ingredients for the Sriracha Mayo Sauce, I try to buy most of my condiments throughout the summer when they’re most often on sale at great prices! And by that, I figure out what I’m going to need through the winter until the sales start happening again around Memorial Day and stock up. There are also good sales on many of the common condiments around the Super Bowl so if you’re not stocked up by then, think about watching those sales closely. Superbowl can be kind of a “Hail Mary” for stocking your pantry or freezer on some items like condiments or meats.

I generally keep a jar of horseradish in my fridge. (I just craved horseradish when I was pregnant with my daughter – it was kind of crazy! I’d just eat it from the jar standing in front of the fridge. No one else liked it, so there were no worries.) I don’t usually buy horseradish mayo, which doesn’t go on sale as much as regular old mayonnaise, but still had a bit leftover from the marvelous Copycat Panera Steak & White Cheddar Panini I’ve been making through the summer. I usually just mix a bit of horseradish with mayo. It only takes a touch of horseradish, so go by taste.

For the Shishito Peppers:

For the Sriracha Mayo Dipping Sauce:

Mix all ingredients together, adding Sriracha according to taste.

For the Shishito Peppers:

Heat oil in a wide sauté pan over medium heat until it is good and hot but not smoking. Add the peppers and cook, tossing and turning them frequently until they blister. They shouldn’t char except in a few places here and there. Don’t rush. It takes 10 to 15 minutes to cook a panful of peppers.