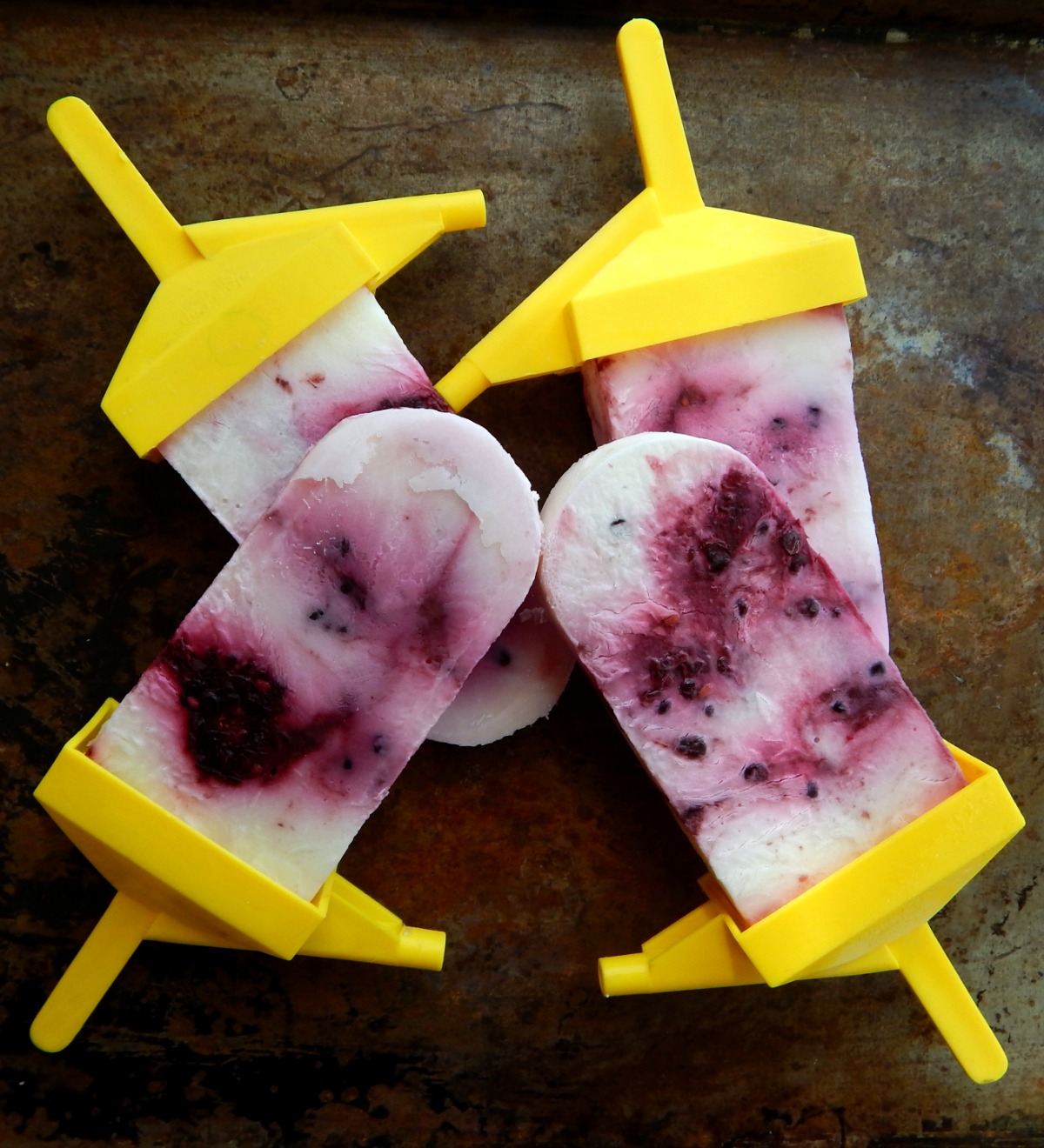 I hope everyone had a happy (and safe) 4th of July. I had all kinds of great blogging plans for some spectacular Ice Cream Cone Cupcakes and a few other party recipes but then I got derailed. Completely foiled. That just happens sometimes at the folks. I make something and it disappears before I can even get a photo…let alone formally serve it. I guess that’s a compliment, lol!! Those posts will be coming soon because I plan on posting lots of quick fun summer food, so stay tuned. They’ll still be perfect for all the summer parties yet to come, but in the meantime, enjoy these Blackberry Yogurt Swirl Popsicles.

In the meantime, I’ve made these Blackberry Yogurt Swirl Popsicles several times and finally managed to get a few photos in before they all disappeared (yep, it seems to be happening pretty consistently)! These are fantastic and a little more sophisticated than the popsicles the kids and I used to make in paper dixie cups way back when but they’re still easy enough to whip out. I suggest you hide them in the freezer, maybe behind a bag of frozen veggies until you’re ready to serve them.

And by the way, these swirled berry popsicles aren’t too sophisticated. They’re popsicles, after all. They’re going to be so great on a hot, hot summer day. You might even want to get more than one set of popsicle molds and just keep making these or other popsicles on rotation. It’s been so hot this year I think I might declare this the year of the popsicle and make bunches and bunches of them!

What I love about these popsicles is that the yogurt is cold and creamy and a very simple lemon (or lime) infused syrup gives the yogurt the perfect popsicle texture and the bit of citrus accents the berries beautifully. A little citrus goes well with so many berries, and this recipe works with other types of berries so you can choose your poison, so to speak. Strawberry is beautiful with lemon or lime, l especially love blueberry with lemon.

It’s well worth the little extra time and effort, by the way, to make that lemony syrup. That syrup is a game-changer! If you’ve ever had a yogurt pop that was a little gooey or a little chalky or maybe even too hard, you’re not going to have that issue with these.

I don’t mind seeds in my popsicles; they can be strained out and I get that seeds really bother some people and they can be strained out. There’s a bit of a trade-off. If you don’t strain and mash the berries, you’ll have chunks of berry throughout your popsicle. If you strain, the whole berry mixture is more homogenous and will still swirl but the swirls won’t have those fruity little chunks that are like…well, the best part of the popsicle!

Unless you know the exact amount your popsicle mold holds and exactly how much mixture you have in volume you have to play a little loosey goosy the first time you make these. Take note if you have too much and cut back on the recipe or have another container handy for the excess and if you don’t have quite enough to fill your molds, increase the recipe size just a bit.

I love that popsicles are fun and give a little portion control. And popsicles are so inexpensive to make at home that it can be huge cost savings over what you can buy at the store or at least a popsicle that’s comparable in quality. Make it a fun project with the kids. I always love how excited kids get at having a hand at making something.

I almost always buy yogurt at either Aldi where it’s cheaper than the yogurt at the grocery or at my buyer’s club, where it costs the same but comes in a larger carton. Here’s a case where fresh blackberries are going to work much better than frozen; buy them on sale around any summer holiday. Choose lemons by weight, not size or color, as long as they’re sound. And while Aldi has great prices on honey, check your drug store! Yeah, they often have coupons for honey at a low cost. Tuna fish, too!

Now at home, I have a fancy, dancy Progressive Popsicle Molds, but at the folk’s house I just have these funky yellow second-hand store jobbers. Funny, but the popsicles out of both molds taste the same! (Although I do love the Progressive even though nobody told me to say so.) If you’re looking for kitchen gadgets, don’t be afraid to stop by your second-hand stores and donation centers…you never know what you’ll find. It make take some persistence and repeated visits if you’re looking for one particular item; I generally take the attitude that I’ll probably find something I want/need (even if I didn’t know it) and I usually bring something to donate, which makes me feel better about buying more random kitchen stuff!

Note: if using wooden popsicle sticks, soak in water for at least one hour before making.

Place lemon peel, water, and sugar in a small saucepan. Cook, stirring, until it comes to a boil and sugar has dissolved. Gently simmer an additional five minutes. Strain, discarding peel and completely chill.

This may be made ahead and refrigerated or cooled quickly by straining into a small bowl and then setting that bowl into a larger bowl filled with ice water. It should be cold to touch before using.

Preparing and filling the popsicles:

If your berries are large, especially those huge blackberries I see in the market these days, cut them in half. Place berries in non-reactive bowl and squeeze 1 tablespoon lemon or lime juice over. Add honey, stir to combine and either mash by hand to desired texture or place in a blender and puree. If you wish to remove seeds, press through a strainer.

Whisk yogurt and chilled syrup together and set aside.

Assemble popsicles by spooning in (or pouring) a little of the yogurt mixture, then a little of the berry mixture into each popsicle mold, repeating until you reach 1/4-inch from the tops (to leave room for expansion as they freeze). Use a skewer to lightly swirl the mixtures together. Add the lid and the popsicle sticks if needed.

Makes 10 popsicles in 1/3 cup molds. Amount will vary depending on what molds are used.

Note: If time allows, and especially if the popsicles won’t be eaten all at once, right away, I like to prefreeze a plate or tray before unmolding the popsicles. Then I place the mold in hot water for 10-second increments and as soon as they pop out, lay them out on the frozen plate and put back in the freezer. That keeps them from melting prematurely from the heat of the unmolding.

Adapted from Fany Gerson’s Paletas, by way of Smitten Kitchen.

I’ll be posting this recipe on Fiesta Friday number 179, hosted by Angie and co-hosted by Petra @ Food Eat Love and Laura @ Feast Wisely.Be sure to stop by Fiesta Friday and Petra and Laura’s blogs and see what everyone is making this week.