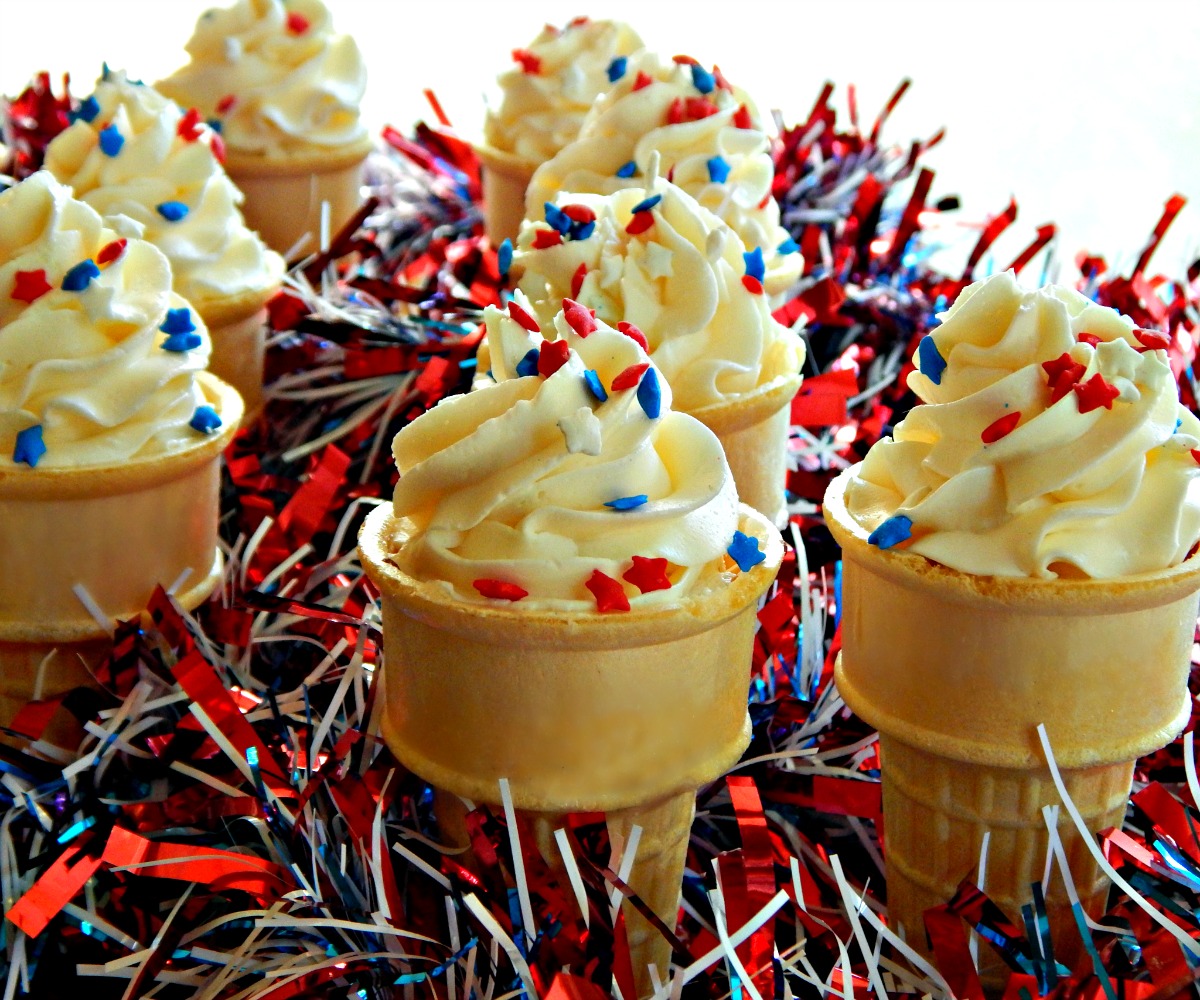 These Ice Cream Cone Cupcakes are phenomenal. The crunchy cone (and I’m not a “cone” person but the baking made them so much better), the easy, but very rich home-made yellow cake inside (thanks Ina Garten) and the buttercream. Oh the buttercream!! 🙂 It’s all an incredible combination.

This time, I used an Italian Buttercream but next time it’s my buddy Carlee’s White Chocolate Buttercream. I think it holds up better to summer heat.

While going home-made might seem to be a bit of work for what essentially looks like a kid’s treat – trust me – no grown up is going to want to turn these down. I’ve played and tweaked and these will make anyone of any age very happy!

I had quite a bit of trouble, initially, in making these. I found out a few things along the way:

One of the hardest things for me to find were cute 4th of July red, white & blue decorations. If your store doesn’t have any sprinkles or decorations for your holiday, ask at the bakery. Mine put some of theirs in a little plastic cup and charged a fair price.

Cream the butter and sugar in the bowl of an electric mixer fitted with the paddle attachment on high speed, until light and fluffy. On medium speed, add the eggs, 1 at a time, then add the sour cream and vanilla. Scrape down the sides and stir until smooth.

Sift together the flour, cornstarch, salt, and baking soda in a bowl. With the mixer on low speed, add the flour mixture to the butter mixture until just combined. Fill the cones to the bottom of the highest ridge with batter. Bake in the center of the oven for 20 to 30 minutes, until a toothpick comes out clean. Cool to room temperature.

Frost and decorate as desired. I recommend White Chocolate Buttercream, especially if making and serving in summer heat. In the photos, I used Italian Buttercream (recipe coming.)

I’ll be posting this recipe on Fiesta Friday number 179, hosted by Angie and co-hosted by Petra @ Food Eat Love and Laura @ Feast Wisely.Be sure to stop by Fiesta Friday and Petra and Laura’s blogs and see what everyone is making this week.