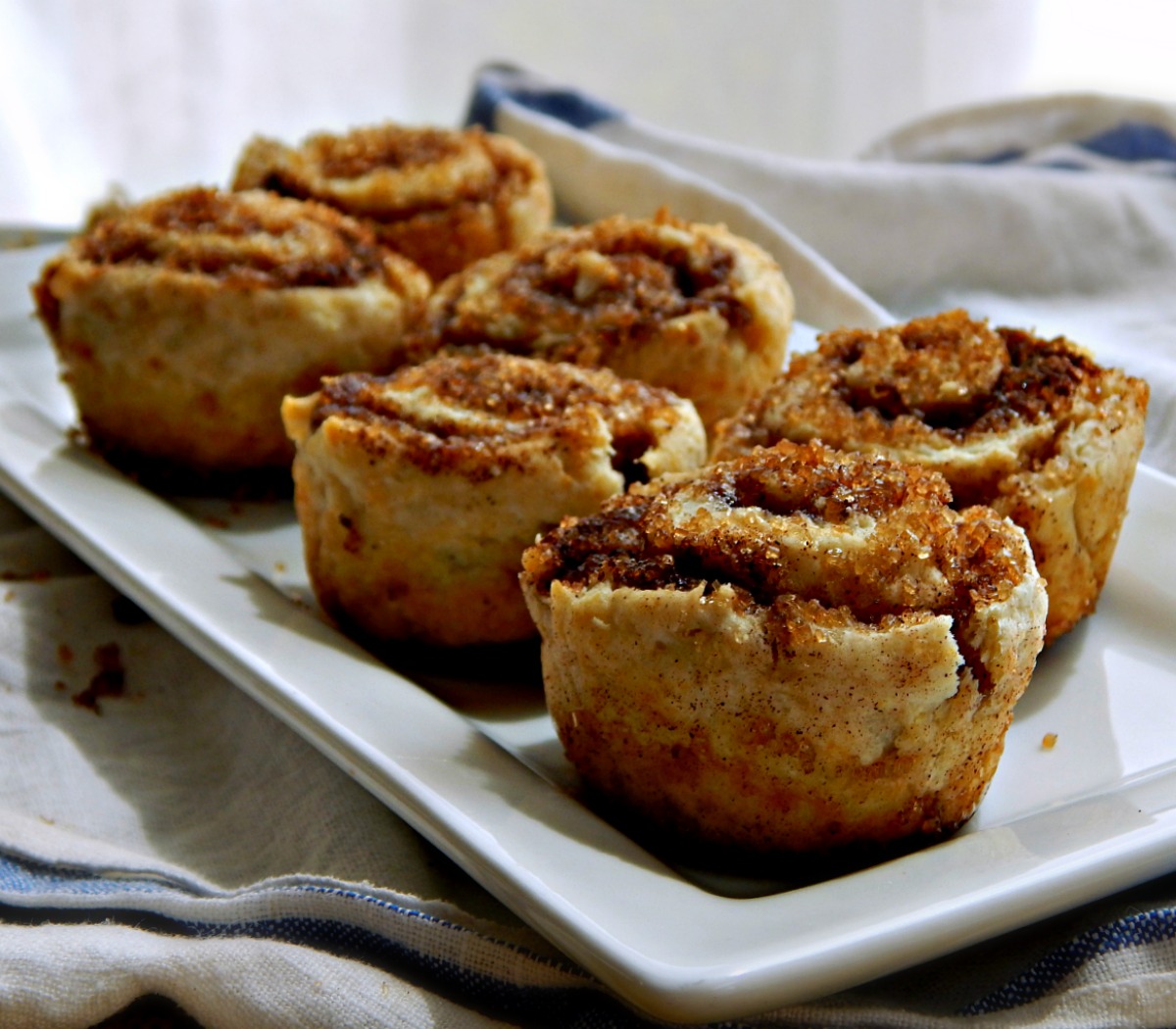 If the name Ragamuffin doesn’t captivate you, the taste will. Ragamuffins are the lazy cook’s (by lazy I mean me, not necessarily you) way to a little Cinnamon Roll flavor without the yeast & the wait that comes with it.

Ragamuffins are basically fun little biscuits rolled out, spread with butter, sprinkled with sugar and baked off – from start to finish in about 30 minutes or less.

Now, Ragamuffins aren’t really quite a cinnamon roll – the biscuit dough tastes like home-made biscuits. It really lacks any sweetness on its own so that explains the outrageous amount of sugar in the filling. See, I WAS going to cut back on the sugar when I sliced a bit off the end and gave it a taste. I unrolled them, added the rest of the sugar and rolled them back up. They needed that sugar.

I adapted this recipe from Epicurious (A Maple Sugar version appeared in a 2006 Gourmet) and took the hint about cooking them in the muffin tins from Seasons and Suppers. When I grow up, I want a blog like Jennifer’s! Aren’t her photos marvelous? Her muffin tin seems to have 9 muffin cups; maybe that’s why her’s are a bit taller than mine, which I cut in 12th’s to go into my Stepmom’s ancient two 6-cup tins.

I don’t think I’d make Ragamuffins for a fancy brunch or company but I would make them over and over for a quick breakfast treat for the family or a late weekend breakfast. Or maybe for an after-school snack. Or maybe an evening craving…I did mention they’re quick, right?

Ragamuffins are good, but they’re rather humble fare. And just like biscuits, they’re best eaten as they’re made but can be reheated in a slightly dampened paper towel or napkin in the microwave. Jennifer says they freeze well; just reheat on a baking sheet at 350 degrees F until warm.

I stocked up on butter over Easter and chucked as much as I felt was reasonable in my freezer when it was at a low. Most baking goods drop drastically during the weeks preceding a holiday. Since the generous amount of butter in these Ragamuffins is the priciest item, I brought these to the table for a little over a buck…

Put oven rack in middle position and preheat oven to 400°F. Line a large (17- by 14-inch) baking sheet with foil or parchment.

Whisk together flour, sugar, baking powder, and salt in a large bowl. Blend in butter with a pastry blender or your fingertips until most of mixture resembles coarse meal with some small (roughly pea-size) butter lumps.

Add milk and stir with a fork until a shaggy dough forms. Gently knead dough 8 to 10 times with floured hands on a lightly floured surface.

Roll out and fill dough:

Roll out dough on a lightly floured surface with a floured rolling pin into a 13- by 11″ inch rectangle.

Spread softened butter evenly over dough and sprinkle all over with brown and turbinado sugar and the cinnamon, pressing firmly to help adhere. Beginning with one long side, roll up dough snugly, jelly-roll style.

Cut roll crosswise into 12 slices with a sharp knife: Cut off ragged ends, then cut the roll in half. Line up the two halves and cut both in half again. Now you’ll have 4 sections and you’ll make two cuts in each section (each section will make three “rolls.”) leaving you with 12 cross sections. Arrange slices, cut sides down, in a lightly oiled or sprayed muffin tin. Place the muffin tin on the foil or parchment lined cookie sheet (for easy clean up in case of spill over.)

Gather any sugar from work surface and sprinkle on top of rolls. Bake until rolls are puffed and barely golden, 18 to 20 minutes. Transfer to a rack to cool until warm, about 10 minutes, then run a knife around the edges of the Ragamuffins and turn out. If the rolls stick, the bottom of the muffin tin may be carefully heated over a burner to liquify the sugar on the bottom.

I’ll be sharing this recipe at Fiesta Friday, hosted this week by Petra @ Food Eat Love and Lina @ Lin’s Recipes. Click on the links to visit! 🙂