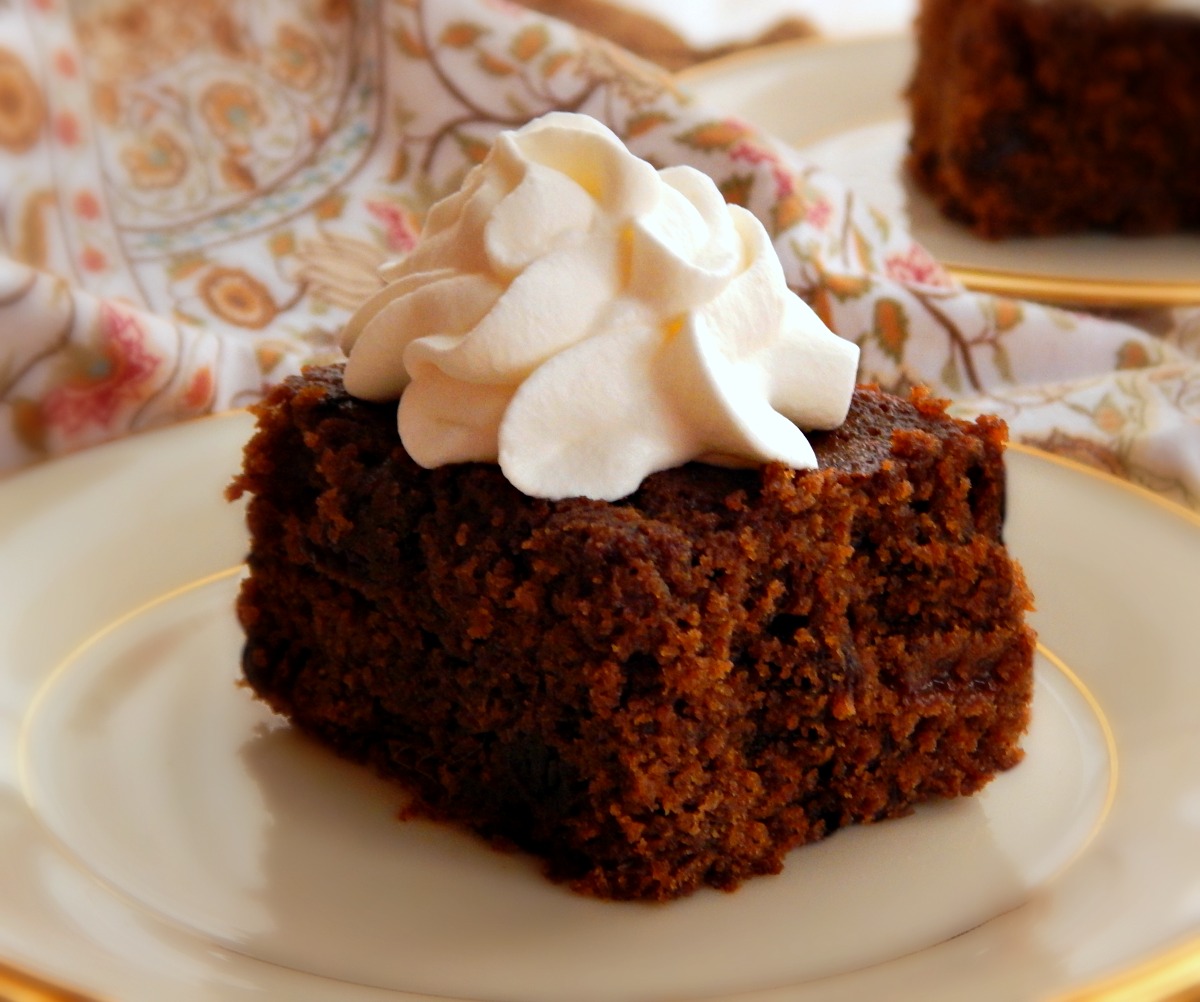 I was very excited to come across this recipe for Fruit Cake In my Grandmother’s recipe box. It came down from her Mother, Lizzie Maloney. It’s a rich, moist and lovely Gingerbread type cake and the spicing is beautiful.

There were no instructions on the aged recipe card, just a list of ingredients – thank you, Grandma, for that! I love you anyway! And this isn’t the first time Grandma was a little vague. Her Apple Pie Cake comes to mind immediately. I had to kind of wing it.

Grandma’s Mother, Lizzie Maloney, was born in 1872 in the US to Irish parents (John Maloney & Bridget Foy) who came over during the Great Famine. The Maloneys started out in the marble quarries in Vermont, then worked their way west to McGregor, Iowa.

John & Bridget bought land, farmed & raised their family until they lost their lives in a flash flood. They were swept down the Bloody Run Creek and into the Mississippi, along with their house and three young men who took shelter with them during a torrential storm. The flood was such a tragedy, the news of it was quickly telegraphed through the country, and I imagine young Lizzie, who had been visiting a brother in St. Paul, found out through the newspaper.

Lizzie waited a year and a day and then married her childhood sweetheart. They were dirt poor (but very well-educated – my Grandma, born in 1899, attended the University of Iowa, and at a time when very few women did) and it seemed the family knew how to have fun. On occasion they rolled up the rugs and danced as my Grandma played the piano. I imagine the Holidays were such an occasion, and I’m guessing this cake would have been served.

It was only after I made Lizzie’s Fruit Cake that I realized it’s a version of a Plum Cake. There were probably some years the raisins were soaked in a little precious Brandy for the requisite three weeks and other years, not, depending on what was in the larder.

Mcgregor, from the Marina; photo from the McGregor Chamber of Commerce

It seems the oldest and most strictly traditional versions of Plum Cake used only raisins as Lizzie’s does. Perhaps it was that fact that they had so little that kept this cake frugal and simple and kept it from being filled up with strange candied fruits and a lot nuts. If the Irish know anything, it’s how to “make do.”

Next year, I’ll experiment a bit more, but for this year I made it in a simple 9 x 11″ pan. We really enjoyed this beautifully moist cake with a good dollop of whipping cream. And yes, I had a wee tot of a little sumpin so I could toast Lizzie. Null-eg hunna gheev to you and yours.

Cream together butter and sugar. Add eggs, one at a time, beating after each addition. Add soured milk and molasses and mix together.

In another bowl, mix the flour, spices and baking soda. On low speed, add to the creamed mixture.

Toss the raisins in a little flour and fold in by hand. Spread into prepared pan and bake 35 to 40 minutes or until top springs back when gently pressed in the center.

Cool on a rack to room temperature. Serve with lightly sweetened whipped cream.

Note: Use buttermilk instead of soured milk or add a tablespoon of vinegar to a cup and then fill with milk to measure one cup total liquid.

I’ll be bringing this recipe to our very own Throwback Thursday as well as to Fiesta Friday. Our Fiesta Friday co-hosts this week are Caroline @ Caroline’s Cooking and Tânia @ Iwanttobeacook.