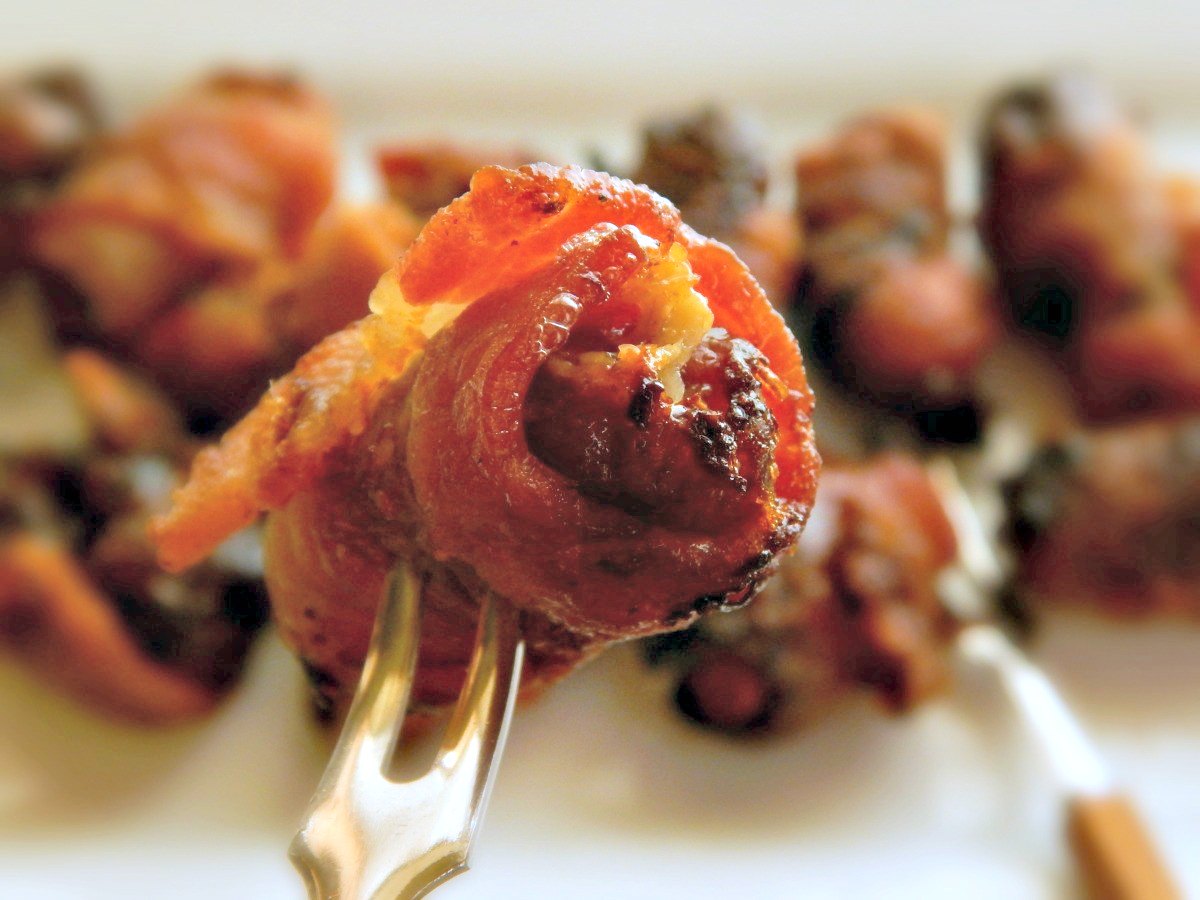 I gotta tell ya, I never thought about eating Bacon Wrapped Dates. Recipes, I’ve seen, but back me up here, folks, doesn’t it sound kind of weird? Maybe I just thought that’s because I haven’t really tried them before. So I’m here to tell you weird they are, but weirdly delish in the most Gobsmacking way! These ones have a little extra bit of deliciousness. They’re Bacon Wrapped Stuffed Dates.

I feel like I’ve missed out on this deliciousness because I was so wrong in my initial assessment and never made them before. Yep, I was wrong. Mark it on your calendars, lol! I was wrong, wrong, wrong! I mean really, who knew? These Bacon-Wrapped Stuffed Dates are mouth-watering, sweet, sticky, crispy, chewy, smoky deliciousness.

So when I made these for my folks when I was down in South Dakota, helping them out, the three of us, along with their sweet Home Health worker just stood around the end of the table, surrounding the tray and one by one devoured them. We didn’t even stop to sit down!

Sometimes these are called “Devils on Horseback” and I can see why – you’ll be carried away by them and you’ll be led into temptation. It’s hard to stop eating these! Aw, sweet temptation! Oh, Bacon Wrapped Stuffed Dates – where have you been all my life?!

These are super easy to make – really, it’s pretty much just assembly, and they can be stuffed with all kinds of things. I used Bleu Cheese, but goat cheese, Manchego or just about any cheese you’d like will be dreamy. Good flavorful cheese will help offset some of that sweet, sweet date flavor. You might want to stuff these with Mango Chutney or Almonds. I really liked the almond version – they stayed slightly crunchy and it was such a nice contrast of textures. Now keep in mind that almonds won’t be able to be skewered, which is my own little innovation to the recipe.

The stuffing was surprisingly easy, although a little sticky. I found it easiest to cut all the bacon, lay it out on a tray, add all the dates, best to use pitted, and only after they were laid all out in rows, filling each with a dab of cheese. It doesn’t take much. The dates may need to be opened up. Then it’s simply a matter of wrapping.

While each date is traditionally held closed with a toothpick and they’re baked on a tray (line it with foil) I don’t like fiddling a whole lot while these cook, and they have to be turned.

I decided, instead, to skewer these little suckers, leaving space between them, which was easy to do since they were all laid out in neat little rows. I just ran the skewers through each in turn, holding each date in place as the skewer went through, making sure the bacon ends were secured by the skewer.

Then for maximum chewy crispness, onto a rack they went. When serving, remove the skewers, or else some guest will probably just grab the whole skewer and run off to a corner, growling at anyone that comes near, and will happily gnaw these right off the stick like a feral animal! I suggest adding a toothpick to each so they are easy to handle.

Dates, like most dried fruit, are going to be at a low from the fall through the end of Christmas week. Watch for sales and coupons and pick up at a low. Check, too, for dates online, and if you have one near you, at your local farm supply stores or nut shops. There are dates of all kinds, all qualities so pick what suits your budget. If your dates or other dried fruit are in flimsy packaging, wrap it well or place in a heavy Ziploc.

Bacon was once inexpensive; its price has risen with its popularity. Watch sales, often near holidays and stock up at a low. Keep in mind that not being brand loyal will give you more opportunities to save. Aldi often has great prices and several grades. The least expensive is not in nice slices.

Don’t let the prices of “near deli” cheese deter you from enjoying them. They’ll usually have more flavor than other cheese which means more bang for your buck. There is a specific strategy to buying. Since stores will often have a buy one get one free or buy one get one half off sales, apply a coupon to both. Pick up coupons from hangtags (packets of coupons near the cheese) from your coupon matching site, paper or electronic, and from the producer’s site. Hand on to them for when the sales happen. Aldi has some great pricing on many kinds of cheese as does your buyer’s club.

I’ll be sharing Bacon Wrapped Stuffed Dates at our very own Throwback Thursday Link Party as well as at Fiesta Friday, hosted this week by Judi @ cookingwithauntjuju and Sandhya @ Indfused. Come and join us! 🙂