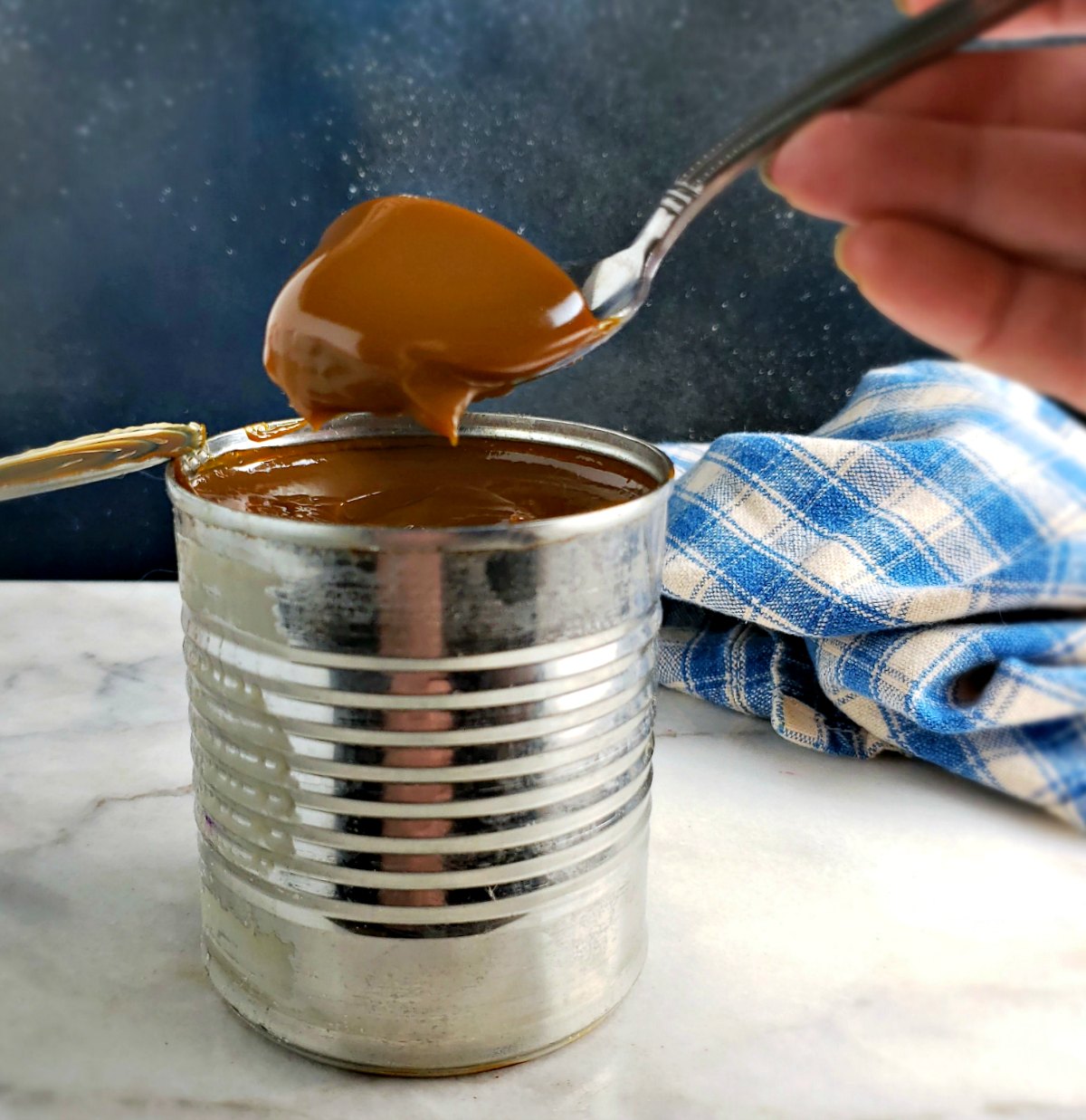 I think there are two classes of people. Those who are wild crazy about the caramelly goodness that is Dulce de Leche and those who have never tried it! There’s no doubt, though, that it can be kind of pricey at the store, and so here’s your solution, my Homemade Slow Cooker Dulce de Leche.

Homemade Slow Cooker Dulce de Leche – I just want to dive in to this!

If you’re not familiar with Dulce de Leche (although it’s become pretty popular in the last few years and you’ll find it in all kinds of things, cake, cookies, bars, ice cream, even coffee creamer) it’s basically milk and sugar that’s been turned into caramel by slowly cooking and reducing. Wikipedia calls it a “confection.” And it’s the creamiest, smoothest caramel you’ll ever hope to see.

In this version, there’s no real “cooking” involved at all. The milk and sugar come from nothing more than a can of condensed milk, and it’s “caramelized” overnight (about 10 hours) in your slow cooker. It’s so no effort, it’s ridiculous! Some people will tell you to remove the label, but you don’t even need to do that. It will just slip off, intact, during the process.

When finished, and you open up that slow cooker, don’t be dismayed by the can; there’s no doubt it’s going to look a little gnarly, but once opened it’s like a big reveal! What’s inside is absolute luscious deliciousness, awaiting your pleasure! Just make sure to label them; someone coming across them in a pantry might toss those little “ugg” cans, not knowing what’s inside.

One thing I feel good about as far as making my own Dulce de Leche? While Sweetened Condensed Milk might not be the healthiest of items, most cans of it contain two ingredients. Milk and sugar. That’s it. Often, store-bought Dulce de Leche has a whole host of ingredients. While I don’t obsessively freak out over that (and yeah, I can down some junk food now and then) for the most part, if I can avoid a lot of additives, especially when it’s this easy, I’m all for it!

Some of my Favorite Dulce de Leche Recipes on this site, I guess I should say all of them at this point. I will have to remedy that and make more! There’s my favorite, these Individual Dulce de Leche Apple Crisps, so much better than they look in my pics, my Dulce de Leche Cheesecake Bars, and this Two Layer Dulce de Leche Pumpkin Pie.

There are various methods and ways to make Homemade Dulce de Leche, and I think I’ve tried them all over the years. Hands down my fave method is in the slow cooker, just because it’s so easy and hands-off:

I wouldn’t feel right if I didn’t tell you that this slow cooker method does have some risk involved. I’ve heard rumors that the cans, the contents of which expand with heat, can pop open sometimes with great force, creating a mess, maybe even displacing the slow cooker lid. Just make sure to cover with the right amount of water and cook on low and that will minimize any risk.

If this is a concern for you, you can use the slow cooker method mentioned above, by transferring the condensed milk to a canning jar, and here’s how:

Do not take the hot, damp jars and put them on a cool surface, like the refrigerator shelves. The shock could cause them to crack.

I like to pick up my condensed milk when it’s at a low, usually during the Winter Holiday season (See Thanksgiving, Christmas & New Year’s Savings) or before Easter (See Easter & Lent, Leveraging the Sales) when so much baking is done. And when I do, I pick up extra just so I can stash a few cans of Dulce de Leche away in my pantry and have bargain-priced Dulce to use all year long, whenever I want.

You may find Condensed Milk (and even Dulce de Leche) is less expensive at a Latin or Mexican market. It pays to shop around and also pays to check different areas of your store if you have dedicated aisles for various cuisines. Aldi has great prices and just FYI, I’ve never priced out this at any of the Buyer’s Clubs.

1 can of Sweetened Condensed Milk

Place a can of sweetened condensed milk, unopened (no need to remove labels) in the slow cooker. Add water to a level two inches above the cans. Add lid and cook for 10 hours on low.

As the cans cool, the moisture may cause them to leave a ring. Make sure to put them on a surface that won’t be damaged or on a several thicknesses of folded paper towel, a paper bag or old rag that you can be discarded.

You know I’ll be bringing this to our Throwback Thursday #38 Link Party, hosted by Quinn of Dad What’s for Dinner, Meaghan of 4 Sons are Us, Alli of Tornadough, Carlee from Cooking with Carlee and Moi! That’s right – me!

I’ll also post this to Angie’s Fiesta Friday, hosted this week by Ahila @ A Taste of Sri Lankan Cuisine and Diann @ Of Goats and Greens.