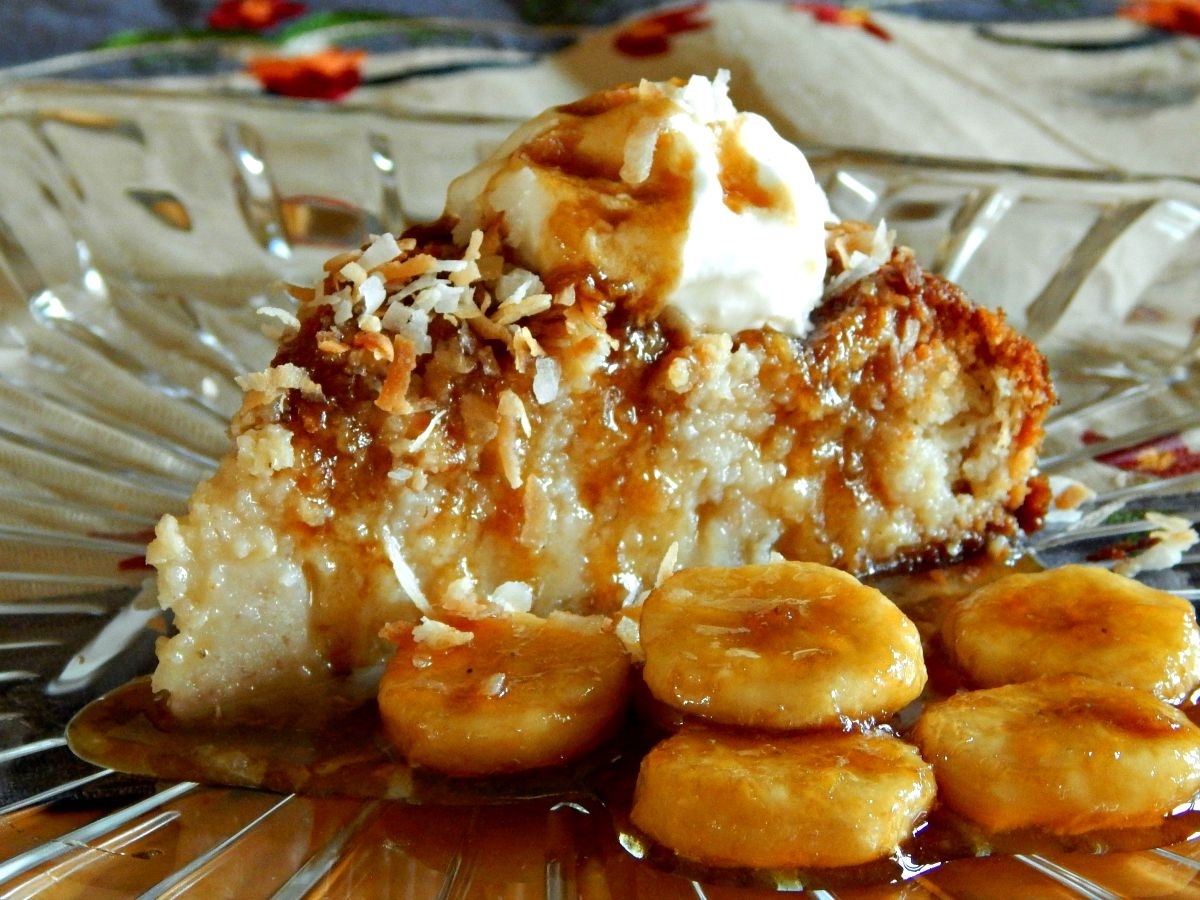 My brother reminds me now and then that any dessert that isn’t chocolate is just a waste of calories. I think I may have very well proved him wrong with this Coconut Tres Leches Cake with Caramelized Bananas, and proving my brother wrong is something that happens once a decade or so…if that! Sorry, bro, you know I love you!

I recently made my Cuban Pork Roast, Lechon Asado, for a dinner party and was looking for something festive with a bit of a Latin flair for dessert. (I wish I would have taken better photos of the roast while I was at it, but trust me, it’s much better than it looks in my humble pictures!)

When I saw this recipe for Coconut Tres Leches Cake at Epicurious, I was sold. Better yet, I was serving my folks and their friends and loved that it was a “spa” recipe and a bit lower in fat than some. Let’s just not think about the sugar – which wasn’t too outrageous, especially if one goes light on the caramel bananas – which I didn’t. Instead, I made more…

Now, fair warning: On the cake stand, this was a homely cake. It only shined when I plated it. I also made a few changes and rewrote the recipe from the original after reading the comments on Epicurious. I made the cake the night before. It was pretty darned good and everyone liked it. I didn’t think it was quite blog worthy.

The next day, I had a smidge of a taste. It was a bit better.  I thought it was just me. On the third day I thought, “We have to eat these last couple of pieces.” Something magical had happened – this Coconut Tres Leches cake was fantastic! Utterly and absolutely fantastic. One of the best desserts I’d ever had. The folks raved about it and didn’t even realize it was the same cake I’d served at the dinner party, especially since I used a fancy individual plating this go around.

Make this three days ahead and you’ll be rewarded! Don’t get me wrong, it was still really good the first night, but by the third it turned into a gorgeous, creamy, silky and almost pudding-like confection and the flavor had rounded out. While three days might seem like a long time, when you’re getting ready for a dinner party it’s nice to have dessert out of the way. The toasted coconut is also a do-ahead, too, although I’d make the bananas shortly before serving.

I’m bringing this Coconut Tres Leches Cake to Fiesta Friday number 87. Fiesta Friday is an ongoing blogging “party” hosted by Angie ofThe Novice Gardener.  Be sure to stop by and take a peek at all the entries and featured selections! *Drool!*

Spray or grease a 9″ springform pan. Cut a piece of waxed or parchment paper to fit the bottom. Add the paper to the bottom of the pan and spray or butter it well. Add about two tablespoons of flour to pan, turn to coat and knock any excess out with a few taps. Set aside.

Sift the cake flour into a measuring cup, level off and add to a bowl. Add the baking powder and salt and whisk together.

If you don’t own a second set of beaters and bowl for your mixer, beat the egg whites and set aside, but if you do, or if you don’t mind thoroughly washing the beaters, beat the eggs after mixing the flour/milk portion of the cake.

Cream the sugar, butter, and banana purée in a mixing bowl until light and fluffy. Add 1/3 of the flour mixture and about 1/3 of the 3/4’s cup of skim milk alternately; mixing until just mixed after each addition. Mix the vanilla and coconut extracts in by hand. Fold in the egg whites.

Pour the batter into the prepared pan and gently level off with a spatula.

Bake at 375°F for 45 to 50 minutes or until the cake is nicely browned and tests done. Remove from the oven and allow to slightly cool in the pan as the milk mixture is prepared. The cake absorbs the liquid more easily if the liquid is poured over a warm, not hot or cold cake.

Combine the condensed milk, evaporated milk, 1/2 cup of skim milk and coconut milk in a bowl; mix well. Poke holes all over the cake with a wooden pick, chopstick or skewer. Best results are had by using a larger implement like a chopstick although the larger holes will show in the finished cake. (They may be covered by the banana topping and/or whipping cream and coconut.) Very slowly pour the milk mixture over the cake.

Cover the cake (still in the pan) and chill in the refrigerator overnight or up to three days (three days preferred.)

Combine the brown sugar and rum in a saucepan over medium heat and cook several minutes until the sugar slightly thickens. Remove from heat and add the bananas, stirring very gently to coat. Allow to cool to room or near room temperature. *

To toast the coconut, try spreading it out on a baking sheet, placing it in the oven and turning the oven on to 350 degrees. Stir once or twice. Generally, although this might vary with the oven, by the time the oven has preheated, the coconut has slightly dried and is just beginning to brown in places.

To remove cake, gently run a knife around the sides and invert on to a plate lined with waxed or parchment paper. Remove the waxed paper that was on the bottom of the cake. Invert again (so it is right side up) onto a platter.

Top each serving of cake with a little of the sauce, whipped topping and a scattering of toasted coconut. Serve the bananas on the side.

I’ll be bringing it, too, over to Throwback Thursday. Quinn of Dad What’s 4 Dinner and  Alli from Tornadough host this blogging extravaganza.