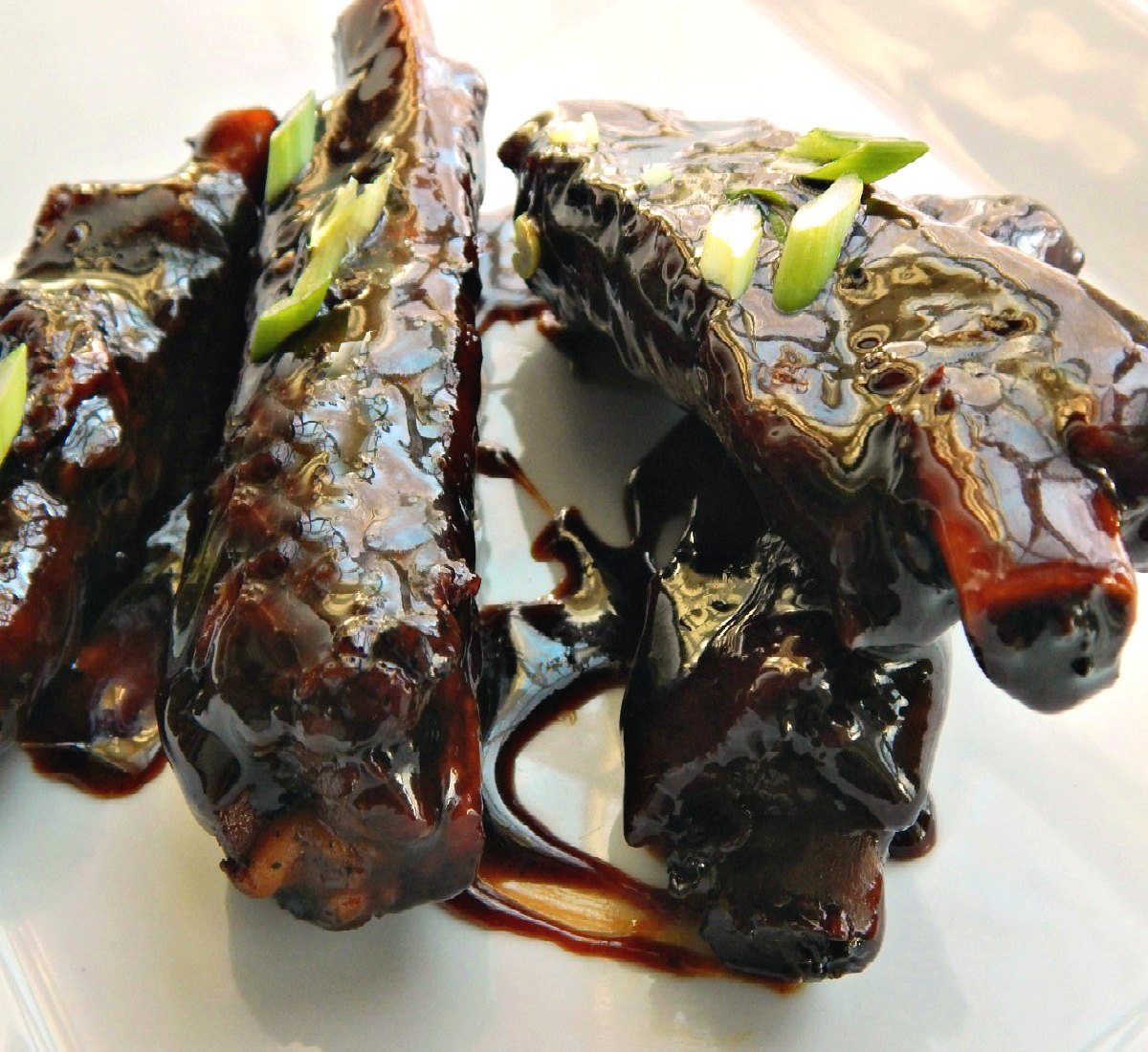 I usually avoid these “Sticky” ribs when I see them on a menu – they’re unpredictable. You never know if they’re going to be really great or if all that stickiness is just covering up the blandness. Not so with Gordon Ramsey’s Sticky Ribs. They’re sticky alright but sweet and sour and just full of mind-blowing flavor.

Ramsey says, “The secret to this dish is to get the ribs really well caramelized before you add any of the other ingredients. As they braise in the oven, all that colour will turn into the most amazing flavour. The glaze is packed full of vibrant, citrusy flavours, with the sweetness of the honey counteracting the spices.”

Gordon Ramsey is not wrong! 🙂 And I do have to say I’ve never seen a rib anywhere like these. They’re like amped up super ribs. They’re like the La Brea Tar Pit ribs. Best of all, Gordon Ramsey’s Sticky Ribs are really not much more difficult, either, than any of the “easy” crockpot sticky ribs made with ketchup, etc. But they’re better – oh, so much better. I took one look at these as they came out of the oven, skipped the napkins and served with dampened towels. 🙂

Gordon Ramsey’s Sticky Ribs are made with a St. Louis style rib, a style that’s been harder to find here in the Twin Cities, lately. I find an average, trimmed rack runs about two pounds, but this varies by area, and if they’re skimpy or you are or you have big eaters, you may want to make two racks. The ribs I bought (on sale, of course) were untrimmed and included the flap meat, cartilage, and tips, and I trimmed them into the St. Louis style. Believe me, none of that extra flap meat or the rib tips from the ribs will go to waste at my house after the ribs have been trimmed, and hopefully not at your’s, either.

Here are my favorite ideas for what to do with the potential waste of those odd bits of meat. Some people toss them in the freezer until they can figure out what to do with them and they languish. As my ribs cook, I’m already starting a broth for my Denver Green Chili, my New Mexican Pozole or my newest creation, Yucatan Pork Stew.

Preparing the Rack of Ribs for Gordon Ramsey’s Sticky Ribs:

Let’s talk about the rack of ribs you’ll get at the store. The rack is going to be embedded in a big, flat hunk of meat and needs to be trimmed. Turn the ribs so the curved side is up and it’s running horizontally the long way, horizontally. “Feel” with your knife, for the spot you can cut through, just above the top of the ribs and remove that big hunk of meat. Your knife should slice through between the end of the ribs and the beginning of the “rib tip” with no problem.

There’s a weird “overgrowth” of “flap meat” over part of the ribs, maybe a little, maybe a lot. Hack that off to reveal the ribs below it. Then remove the silvery membrane across the ribs. With your knife, loosen up a corner, enough to get a grip, and using a paper towel or cloth for traction, grab it and pull across the ribs, slowly and steadily. The membrane should come right up. Now and then you need to really work at it and take more than one try. Get it the best you can.

I have made a few alterations to Gordon Ramsey’s recipe – I found the first time I made them there was just way, way too much sauce, so I did cut back for the recipe, below. And even me, who hardly puts sugar in anything, and yeah, I’m gonna say it, found Gordon Ramsey’s Sticky Ribs weren’t quite as sweet as I’d have liked. I stirred in a bit more honey at the end and fiddled with the method and temperature just a bit to get the most tender ribs. It’s all in the recipe, below.

See, I think ribs shouldn’t “fall off” the bone, nor should they be chewy – there’s a “sweet spot” right in the middle that allows you to take a bite without the whole rib coming apart and slapping you on the chin! You’ll want to test when the rib is close to being done as ovens can vary a bit.

Ribs in my area are usually $1.99 a pound on a deep sale and on a regular sale for about $2.19 a pound; I might pick up a rack or two extra, but they’re a tough fit in a freezer. Watch for sporadic sales during the year as well as sales during the Summer Holidays, Superbowl and during the Fall.

Ginger can vary wildly in price, although I’ve never seen it marked for “sale.” I pick up a root or two when it seems reasonable and freeze in a heavy Ziploc. It doesn’t freeze so hard that it can’t be grated and keeps for a long time. If it looks a bit frosty, trust me, the ginger below that will still be fine.

Honey can be really pricey. I have a lovely friend who gives me honey for Christmas every year that she finds on her travels. I find honey really cheap at (I know it sounds strange) Walgreens. They have coupons in their ads for honey when it is on sale. If your honey crystallizes, place the bottle in very hot water.

Asian Condiments and Ingredient are often on unadvertised sale during the Lunar New Year. Check in the “Ethnic”  sections of the store as well as near the American/Asian if your store has both.

Note: Even if I double the recipe and cook two racks, I only increase the sauce by another half.

Have all ingredients measured and at the ready, especially the liquid ingredients added in after the honey is added. At the high temperature needed to brown the ribs, the honey will caramelize very quickly and any bitter or burned taste cannot be remedied. The liquid will need to be added immediately when the honey caramelizes to cool it down.

Preheat oven to 325 degrees. Season the ribs with salt and pepper, massaging the seasoning into the meat.

Heat a roasting tray (my large cast iron pan worked well for one rack) on the stove top with a little olive oil and brown the ribs for 5-10 minutes, turning, until they are nicely browned on all sides.

Remove pan from heat and add the garlic, ginger, chili flakes, star anise, Sichuan peppercorns, and honey. Return to heat and cook for two minutes or so until the honey begins to caramelize.

Immediately add the soy sauce, rice vinegar, and Shaoxing wine and bring to the boil, simmering for 1 minute. Taste and adjust the flavors, adding a little extra honey or vinegar or other ingredients to balance to your liking, if necessary. Be very careful as this will be extremely hot.

Add the spring onions and stock and bring back to a boil. Cover and place in the preheated oven for 30 minutes. Uncover, turn ribs over and cook an additional 30 minutes (you may wish to turn one more time) until the ribs are tender.

Remove the pan from the oven and place ribs on a platter, lightly covered with foil. Bring the marinade to a boil and reduce for 8-10 minutes until the sauce is thick and syrupy, stirring often towards the end. A flat spatula works well for this. Keep in mind that the sauce will be a little thicker once it begins to cool slightly. Turn off heat and turn the ribs in the sauce to coat them well.

Any leftover ribs should be left in the sauce, which will continue to improve! Reheat, covered, in the oven at 350 degrees for about 20 minutes.