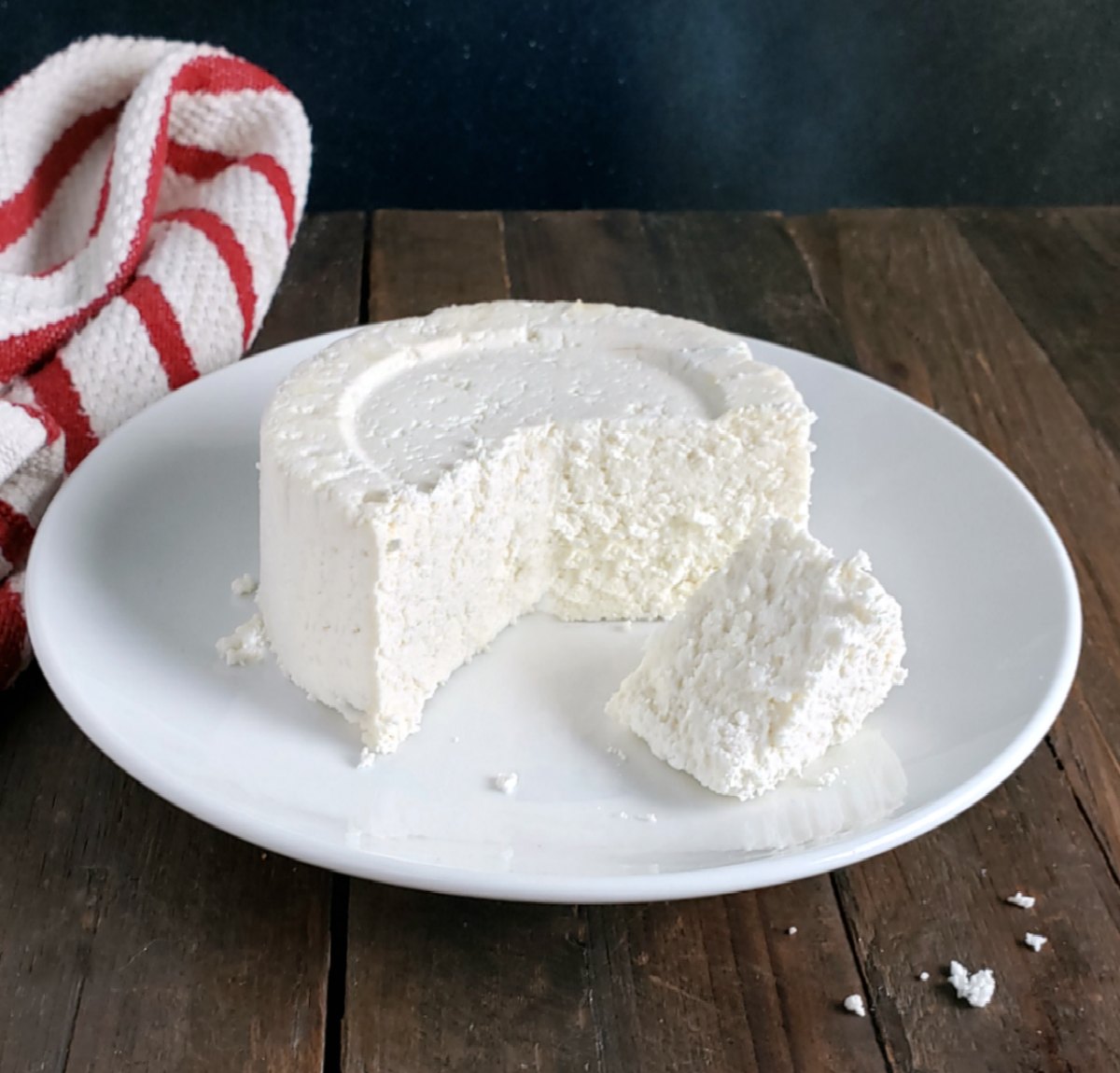 Queso Fresco, Fresh Cheese, is a wonderful creamy cheese, and SO misunderstood. Queso Fresco is often confused with Queso Blanco, White Cheese, another soft, crumbly Mexican cheese. As a matter of fact, some “experts” say they are the same – and some say they are different. They are, after all, both white, both fresh, both crumble.

While I’m no “expert,” here’s my understanding of the confusion, garnered from sites about cheese making:

This recipe has ingredients from both, the culture from the buttermilk and the acid from lime or vinegar. Is it Queso Fresco then, rather than Queso Blanco? I think so – when I put some in the microwave, it got all melty and stretchy. To be sure, it didn’t melt as much as some cheeses, but until I experiment further – I’m calling this Queso Fresco. Rick Bayless calls this Queso Fresco, and an expert cheese person kind of does, as well – and while I didn’t use Rennet, I did use cultures.

Wikipedia, by the way, gives just the opposite explanation in Cheeses of Mexico, while the article on Queso Blanco falls in line with the Blanco being the cheese curdled with acid and the Fresco being the one with Rennet and cultures! Who knows!

I’ve read that in Mexico, cooks often make up a batch early in the day to be ready for the evening dinner. I decided to gather mine together in cheesecloth and press overnight into a round, although it looked as if it would be just fine used as is.

So now comes the question – why on earth would I make my own cheese? For me, there were a couple of reasons I’d attempt this:

It was funny, my son stopped by and opened the fridge, and I called out to him, “Don’t drink that milk – I’m making cheese.” He just looked me up and down, and in the most deadpan voice said, “Of course you are. Who doesn’t?” 🙂 He’s used to my many and varied experiments!

Fresh cheese like this has a very short life-span, so I made a small amount. If simply using no live culture and an acid, the shelf life is just a day or two. If using a culture like this, it should last a few days to a week at most. Any discoloration, of course, is reason for a total discard of the cheese.

When you make any fresh cheese, you’ll want to make sure your equipment is well washed, pristinely clean and preferably sterilized. With all that care, of course, make certain your hands well washed, too! Soft cheeses like this can carry all kinds of nasties, so take a little care.

Since I have no Mexican Abuela to ask about this cheese, I turned to Rick Bayless and adapted his recipe. All I did, really, was cut it back a bit and press the cheese, and add a few hints for success. This came from Mexico, One Plate at a Time. Using Citric Acid in this recipe will give a neutral flavor and using lime will give it a bit of a tang. 🙂

Culture the milk. Pour the milk into a large pot—an enameled cast iron Dutch oven works well, as it well help hold the heat. Stir in the buttermilk, attach an accurate thermometer that registers temperatures as low as 70 degrees and set the pot over medium heat. When the temperature reaches 75 degrees, turn off the heat, cover the pot and let stand 3 or 4 hours.

Maintain a temperature between 70 and 77 degrees. If the room temperature is too low, consider wrapping in a towel, placing in the oven or other measures to ensure the temperature is warm enough. It helps to have a probe thermometer to monitor the covered milk.

Set the curd. If using citric acid, stir it into 1/4 cup cool water, continuing to stir until dissolved.

Uncover the pot, set over medium heat and stir in the dissolved citric acid or the fresh lime juice. You will immediately see small curds start to form. Every couple of minutes, stir slowly, gently and thoroughly over the entire bottom of the pot until the milk reaches 195˚F—it’ll take just over 20 minutes. At this point the curds will very obviously be floating in the milky-transparent whey. Remove from the heat and let stand 5 minutes without stirring.

Drain the curd from the whey. Wet a large piece of cheesecloth and drape it into a very clean, preferably sterile colander. Set the colander into a large bowl. Using a large slotted spoon or a fine-mesh skimmer, carefully ladle all of the curd into the colander.

Gather the cheesecloth up around the curd and gently press with the back of a large spoon to expel a bit more whey. Unwrap the curd onto a plate, break it up and sprinkle with the 1/2 teaspoon of salt. Work in the salt with a spoon or your very clean fingers.

Finish the cheese: Gather the cheese curds into a 1-inch-thick disk in the cheesecloth, transfer to a plate, cover and refrigerate until thoroughly chilled. The cheese should last about 1 week in the refrigerator.

Note: I emptied the bowl of whey (I meant to see if I could get any Ricotta out of it, but didn’t) and placed the cheesecloth wrapped cheese back in the colander over the bowl. I covered the cheese with a very clean plate and added a can of tomatoes on top of the plate. I put the whole thing in the fridge over night.

* Buttermilk: In my post about Creme Fraiche, I learned that some people have difficulty getting a set from buttermilk. That led to some research and I found:

** Citric acid or sour salt is available in the kosher section of many grocery stores or on line.