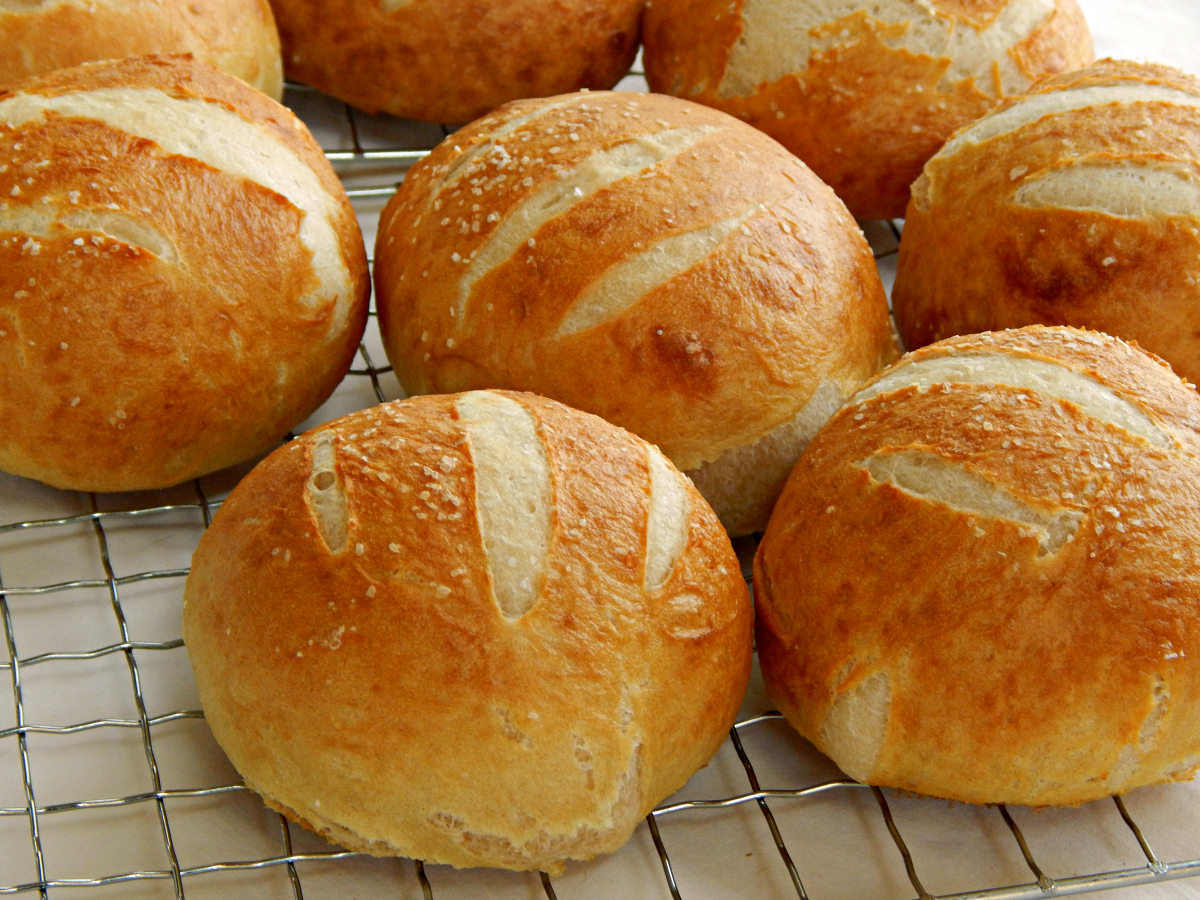 Yeah, I can bake bread, and I baked my first when I was about 12 years old, but I generally don’t. See I have an equation: flour + water = mess! Sometimes, though, a little mess is worth it, and in the case of Homemade Pretzel Buns, it REALLY is!

That’s because these homemade Pretzel Buns really do mimic pretzels. Not Hard german pretzels, but gorgeous soft pretzels. They’re just a little dense, but in a good way and have just the right amount of “chew” to them. But the best part? Yeah,  you guessed it! It’s the top that has a good bit of texture, just like a real pretzel and of course, a sprinkling of salt. My photos don’t do them justice, believe me! But even so, I think you can tell that the top of these buns has some crispiness. It’s just a wonderful thing. You do need to be aware, though, that once these rolls are bagged in plastic, that crust does soften up a bit, but depending on how you’re using them, that can be a good thing; sometimes you want the homemade Pretzel Rolls to be a bit softer.

So for instance, you might want to serve your homemade Pretzel Buns with soup, maybe my Beer Cheese Soup or maybe my Vermont Cheddar Soup; then they’re just wonderful all crispy and slightly crunchy on the top. But maybe you want to serve a burger, like my Bomb Oven Roasted Burgers on your pretzel bun…then a bit softer might be an advantage. They’ll be a little easier to bite through without any heroics! These rolls are awesome with big gourmet burgers – the buns hold up so well.

Of course, what you can’t tell by the photos is the wonderful smell and taste…there just isn’t anything in the world that can compare to the smell of freshly baked bread. I think that aroma should be bottled for perfume. I can just picture myself dabbing some on and walking about with a score of men, women children and dogs, maybe a squirrel or two and a raccoon trailing me like I was some kind of pied piper!

This recipe makes 16 good-sized burger buns or more smaller rolls, which are great for serving with soup. But know that unless you’re going through them all, that means you’ll have some to bake and have some to freeze and bake-off another time. Twice the rolls, half the time. The bonus here: You can pull out just the right amount of frozen buns you need so there’s no waste. I don’t know about you but I hate buying a package of six or eight buns at the store and having to figure out what to do with any I don’t need! (You can halve the recipe if you want, but I prefer to make the whole works and get the mess done all at once.)

This recipe is pretty easy to make; the dough is gorgeous and very responsive, but there is the step that makes it a pretzel! The rolls take a bath in a simmering hot baking/soda water solution. I think that’s actually the fun part, and this would be a great recipe to teach a child or teenager with. It’s fun to see how the sad little rolls that come out of the water bath bake up to perfection. Like magid! Do be careful as that water solution can boil over easily and make a horrifying mess! Use a very large pot if you have one. (Although it looks bad when that happens, it does clean up easily with water.)

So now you might be wondering “If these are so easy, why is the recipe so long?” I’ve tried to explain each step so even if you’ve never made any bread, let alone pretzel bread, you can avoid potential pitfalls. As I cook, I notice when I have a question in the recipe to figure out – and I don’t want you, gentle reader, to go through the same angst. There are also instructions for making by hand or machine as well as for both types of yeast and for making ahead and freezing.

The mark up on bread is always super high. Even the cheapest of plain old white bread is so much more than making your own, and of course there’s no comparison in taste. But when you’re comparing any “specialty” bread, then making your own becomes extremely worthwhile. I’d estimate these run around 60 cents for 16 and recently saw pretzel buns at my store’s bakery for $6.99 for four!

Buy your yeast is by the jar (watch for sales before Easter and before Thanksgiving right up to Christmas) and keep it in the freezer. It’s good pretty much indefinitely. Look for flour and milk at Aldi if you have one, or else stock up on flour during the holiday sales, too. Freeze any flour or flour containing products for three days to prevent any “peskies” from invading your cupboards.

*Yeast: this recipe calls for instant yeast which does not have to be “proofed.” Directions for “Active Dry Yeast” are at the bottom of the page.

Measure eight cups flour into a bowl and set aside – you may not use all of this; when making bread the amount of flour depends on a number of things, especially how much moisture is in the flour and measuring habits. I let the dough “tell” me how much I need to add, below.

Mix milk, water, yeast oil and salt together in a heavy bowl or pan. Enameled cast iron works well. Add about three cups of flour, mixing with a heavy spoon. Continue to add flour until the mixture begins to pull away from the side of the bowl. It will still be very wet at this point, and you’ll probably have used about 3 – 4 more cups of the flour.

Place about 1/2 cup of flour on counter or table and scrape dough onto it. With floured hands, begin kneading, adding flour as necessary, but as little as possible. Continue to knead for about 8 minutes.

The dough at first will be shaggy and sticky, but as you work it and add flour, it becomes more manageable and smoother. This dough shouldn’t be “stiff” and hard to work at the end, it should be soft and it will still feel tacky, but shouldn’t stick to your floured hands when you press gently.

Place in an oiled bowl, top side down, turn it in the bowl to top side up, which will lightly coat the dough. Cover with a clean kitchen towel, place in a warm, draft free area, 70 to 75 degrees is ideal and let rise till doubled. (About an hour at 70 degrees.) If your home is cooler, you can preheat your oven to 200 degrees, turn it off, put on the light and place your dough inside.

Without punching down or overly deflating the dough, turn it out onto a floured surface. Divide in half, and then in half again, pressing straight down, not sawing, so you have four quarters. Place three of the dough lumps on a floured surface and cover with a clean kitchen towel.

Take the 4th lump of dough and divide into four equally sized lumps; feel free to weigh if desired. Pick up a lump and pull the cut edges into the center, pinching together tightly.

Place seam side down on a lightly floured surface, cup with hands and lightly push and roll the ball around until it is round in shape.

Lay on a floured surface or tray, cover with a towel, and proceed with the remainder of the dough.

To prepare for baking:

Let rolls rest for about 15 minutes. During this time, bring 3 quarts of water to a boil in a very large pan. Measure the water as it will affect density of solution. Take the water off heat and drop in the baking soda and sugar. It will foam wildly! Return to a good simmer, watching to make sure it doesn’t boil over; that makes a huge mess.

Repeat pinching process by holding each ball of dough in one hand and pulling in from the sides – you’ll end up with a “belly button.” Pick up dough ball by the button and gently drop into simmering water.

Dough will float to top, cook for one minute then turn and cook an additional 30 seconds. Remove with slotted spoon, draining well, to parchment lined sheet pan, belly button down. Be careful; they’re slippery. A little moisture is ok.

The rolls will look strange and lumpy; they’ll blossom in the baking process. Slash each ball about 1/4 inch deep with a sharp knife or clean razor blade. The dough will pull a bit, so a sharp knife is key here. A dull one will drag on the dough and may cause your roll to deflate.

Use a criss-cross pattern or a series of three parallel slashes. If they’re very misshapen during the slashing, nudge back in place, but most imperfections will even out during baking.

Sprinkle each with a pinch of salt.

Bake for 20 to 22 minutes until golden brown, turning and rotating the trays. If you’ve made smaller rolls, check them at about 15 minutes.

* If you use Active Dry Yeast you will need to proof it like this: Mix the warm milk, water, yeast and oil together, but add a teaspoon of sugar to the mixture. Mix the salt into the flour rather than into the yeast mixture. Let the yeast mixture sit for about 10 minutes until bubbly and then proceed with the recipe.

If using a mixer, add about three cups of flour to the bowl. In a smaller bowl, mix milk, water, yeast oil and salt together. Using a paddle, and mixing on low, add the liquid ingredients. Mix until most of the lumps are gone.

Change to a dough hook and continue to add flour, cup by cup, mixing on low until a dough forms and most of the flour has been added. Turn up to medium and knead for about 4 minutes.

Turn out onto a well floured surface and will floured hands, knead several times until desired consistency is reached. (See above.)

I want to note that although I’ve made this recipe several times, on the day I took these photos, I forgot to measure my water – that changed the solution density and my rolls were just a little lighter than usual.

Put dough in bowl, cover with a towel, put in warm place

Dough doubles in abt 1 hour = divide in 4, divide in 4 again, pinch together cut edges

Gently pull from sides to form a belly button, picking up from the belly button drop into water

Place on a parchment lined tray, slash and bake…22 minutes to heaven!