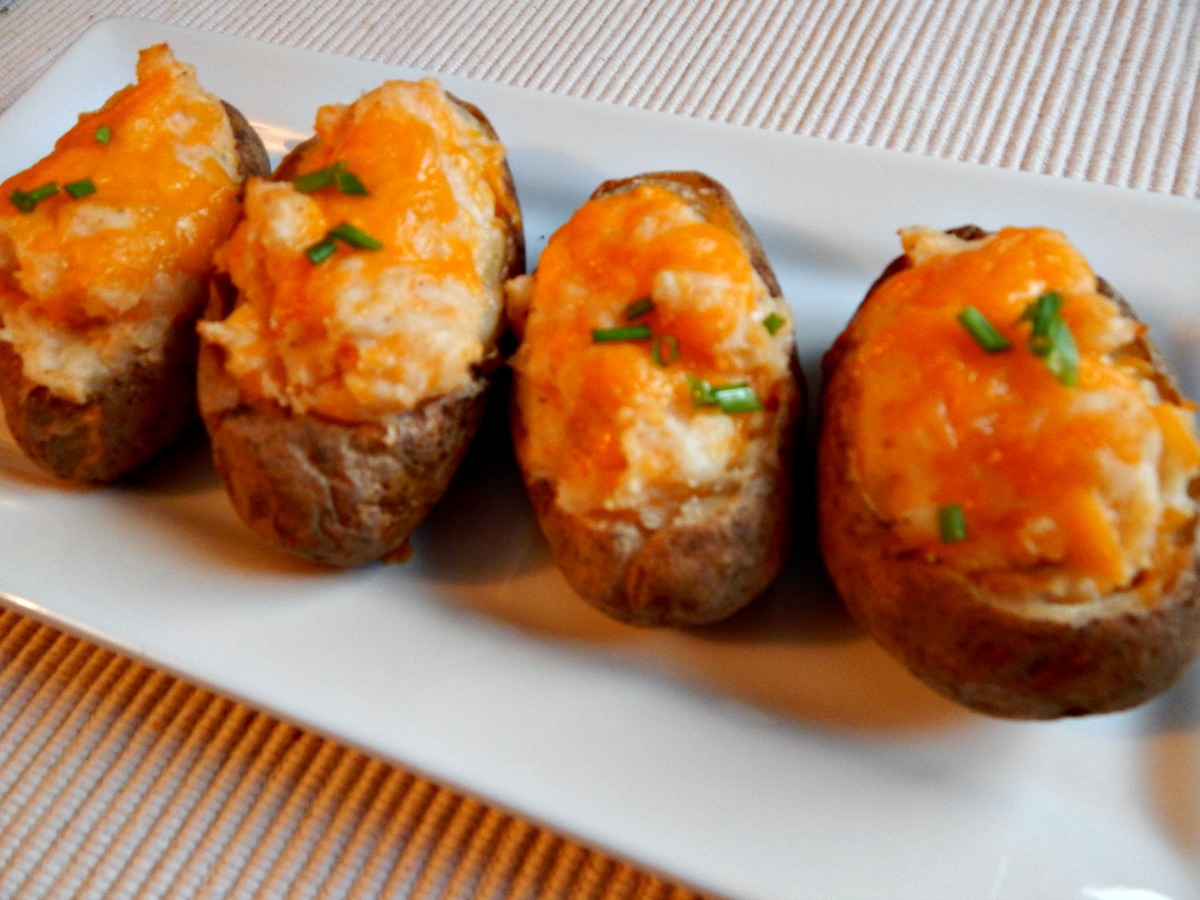 We don’t buy a lot of prepared potato products at our house – I like to control quality and cost; so often, the bagged variety disappoints and has additives I’m not entirely sure about.

Twice Baked Potatoes for the Freezer

Although I’ve never tried them, I’ve seen frozen twice baked potatoes at the store, and they are pretty pricey – $1.76 for two 5 ounce halves. Four are $3.52, but four of these are 76 cents.

My answer to this:  Freezer Twice Baked Potatoes. I’ll make up a lot in the fall when potatoes are at their lowest cost and put them in Ziploc bags. Fall is often when I can find cream cheese on sale, too, as well as butter.

For these everyday potatoes, I’ll generally use the five or ten-pound bags of potatoes and pick through them to find the potatoes that are most uniform in size. The rest get set aside for other dishes where the size doesn’t matter so much.

When company comes, I may splurge and buy the large, gorgeous potatoes sold individually. But for our use, I’ll save the additional cost and calories. Not that these are low-calorie (see below how they may have fewer calories than Ore-Ida French Fries).

I do jazz them up with a lot of dairy, but they are not terribly large. You could certainly make them lower calorie and vary the ingredients. What’s important is that the potatoes must be a thick, heavy mash or they won’t hold their shape when baked later.

Twice Baked Potatoes from the Freezer – This is what happens when you ask your child to sprinkle a little extra cheese on them! 🙂 They were good, though!

Twice Baked Potatoes for the Freezer

Scrub potatoes, pierce gently with knife and bake until soft, 45 to 50 minutes.  Remove from oven and let cool a few minutes.

Slice potatoes in two along the length.  Using a tablespoon, and holding the potato in a clean oven mitt, scoop the flesh, leaving behind a small border in the potato.  Put half in one bowl, and half in the other.

Beat the potatoes with a mixer, add salt and pepper.  (You could hand mash, but this is an instance where its good to build up the starch in the potato – it helps it hold its shape.)  You may need to add a touch of milk.

Mix in by hand the green onion or chives, and cheese if you’re using.  Pile the filling back into the potatoes (I line them up on baking sheets) and freeze.

Once frozen, divide them up into Ziploc bags in appropriate servings for your family meals.

These can be baked, frozen, on a small cookie sheet or plate, or even microwaved.  Sometimes I’ll thaw them, then bake them through – they tend to hold their shape better if thawed overnight in the fridge or even defrosted in the microwave, rather than just microwaved.

The whole recipe is really a time-saving strategy! (Note:  the week after I made these, potatoes went on sale for 89 cents for 5 lbs, cheese was 88 cents for a block!  Go figure…)

Look for sales on all of the items below during the week before or during any Holiday, especially Christmas, Thanksgiving and Easter.

Nutrition:  (without cheese, but with the cream cheese)

To give you an idea of where these fall on the nutritional scale: If a family of five split up a bag of frozen Ore Ida fries, they’d each be eating (on average) about 390 calories, 19 grams of fat. If one ate just a five-ounce potato, baked, nothing on it, they’d be eating 133 calories. Add a tablespoon of butter: 235 calories. So there is a lot of dairy in the twice baked potatoes, but it is divided up into 32 servings.

I used this figure of a family of five because I know more than one family of five who dumps out the whole bag of fries and eats them all with dinner. One family is always watching calories and actually refused the suggestion of twiced baked potatoes when they were coming to dinner – dismissed as “fattening.” We Americans have absolutely no concept of the calories and serving sizes in junk food – sorry, didn’t mean to lecture. Or maybe I did…

Put Your Own Spin on It:

I’ll often add a little bit of cooked, chopped bacon and a sprinkle of cheese at the end of the baking process.  (When I make bacon, I’ll sometimes put a bit aside in a sandwich bag and tuck it into the Ziploc with the potatoes.  It will recrisp as it warms in the oven.)  As said above, you could vary the dairy.  You could add bits of herbs to lend more flavor.

How do you jazz up your twice baked potatoes?  Do you have a favorite recipe you like to make for frozen twice bakes or special ingredients that you add?

7 thoughts on “Twiced Baked Potatoes (for the freezer)”