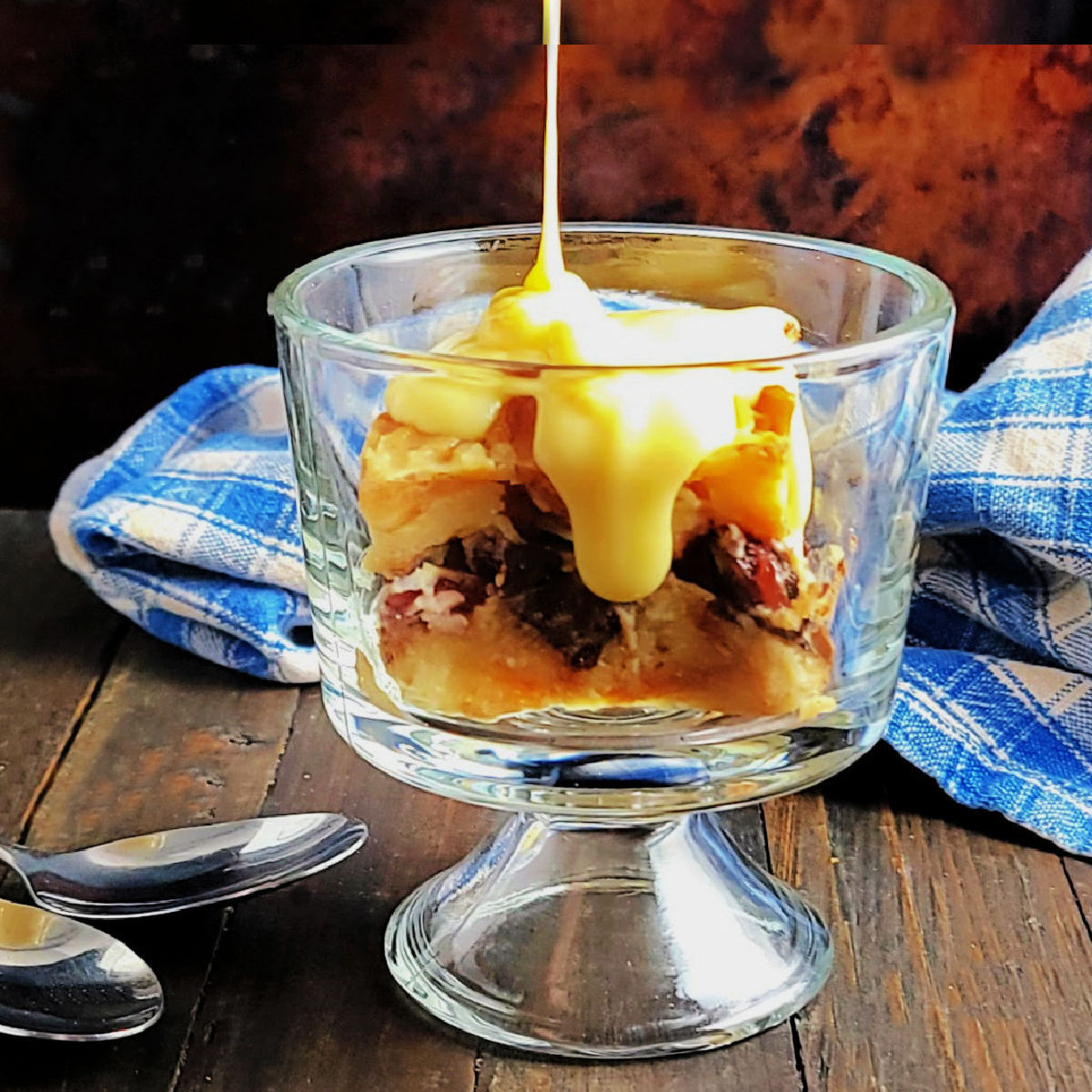 I’ve been making this Simple Croissant Bread Pudding for years whenever I happen to have leftover croissants, which to tell the truth, isn’t that often! But when I do have any stale croissants, this is where they go and it’s absolutely divine.

It’s really one of my favorite bread puddings to make, partly because it’s super simple, super easy, and requires no “specialty” ingredients like cream. That means, as long as you have croissants, it’s a bread pudding that can probably be made at the drop of a hat with what you have on hand.

Using croissants is kind of a cheat. Because croissants are already rich and buttery, the bread pudding seems rich and creamy with just plain old milk and eggs. Now, that being said, you probably couldn’t go wrong with adding in a little half & half or cream…but you don’t “need” to.

I usually make this when we have some basic croissants from the big box store or the grocery store that have gone a bit past their prime, usually ones I’ve brought for an event in a large quantity. I have yet to make this recipe with bone fide French bakery croissants!

I just gotta tell you, though, what really makes this bread pudding is my easy Best Bread Pudding Sauce, which is almost like pudding on top of pudding! I’ll be posting that easy recipe, next!

Here’s the best endorsement, ever! I think that is a look of Bliss on Kenzie’s face – along with a little chocolate!

This recipe is really easy, but there is a bit of a judgment call. It needs about 14 ounces of cut-up or torn-up croissants (I like to remove the bottom crust before I do either because sometimes it’s tougher than the rest.) If you have a scale that’s the best way to figure the number of croissants, which will all vary in size, that you’ll need.

To make, just get out a large bowl, whisk together the eggs, sugar and the pinch of salt, then stream in the milk as you whisk, then add the vanilla. Add the cut up or torn up croissants to soak. I usually soak for about an hour; the mixture will still be pretty watery, but no worries; it will bake up fine, all lush and creamy.

Then layer the bread pudding in a well-buttered dish, doling out about half of it, then sprinkling it with whatever goodies you want inside (see variations) then top it all off with the rest of the mixture.

To bake, it’s best to use a water bath, but in a pinch, it’s moist enough to skip it if necessary. Bake until the top feels almost firm when pressed (it shouldn’t be “squirty” with liquid, but shouldn’t be “hard.” It will firm up as it cools.

Do have a little foil ready to lay over the dish towards the end of baking time in case it browns too fast.

I used to be all about the raisins in bread pudding; it just seemed traditional. These days when I make bread pudding, I’m far more likely to dig around in my stash of dried fruits, candy or chips, or fresh or frozen fruit to see what is appealing at the moment and toss it in.

This is not a huge pan of bread pudding. I usually don’t even measure but I’d guess that I toss about a cup of whatever goodies I’m using, or if using more than one item, about 1/2 cup each.

My Best Bread Pudding Sauce is normally flavored with vanilla extract, but you can get creative with that, too. Maybe add a touch of rum or bourbon if you’re using raisins, for instance, or another favorite to match whatever items you’re using in your bread pudding.

Another little variation is to sprinkle the top of the bread pudding before baking with a little sugar or turbinado sugar for some crunch. Do have a little foil ready to lay over the dish towards the end of baking time in case it browns too fast.

I originally “poached” this recipe from Epicurious but over the years have changed it up here or there…especially with the proportion of bread to liquid and the method.

They suggested checking the bakery for day-old croissants, which are usually heavily discounted.

Hey, I know it’s summer and I know it’s hot pretty much everywhere, but when life gives you lemons, you make lemonade. When life gives you too many croissants, you just gotta try this Simple Croissant Bread Pudding, even if you do have have the oven on for an hour! It’s just as good chilled as it is warm and wobbly from the oven!

When ready to bake, Preheat the oven to 350°. Place a roasting pan large enough to hold your baking pan in the oven and pour 1/2 inch of hot water into it.

In a large bowl, whisk the eggs and the egg yolks with the sugar and salt until lightened in color. While continuing to whisk, slowly add the milk, then mix in the vanilla.

Transfer half the mixture to a buttered 11 x 7″ (or reasonable substitute) casserolr. Sprinkle any of the additions you would like to use over the top. Finish by spooning the remaining mixture over top. Carefully place the dish in the pan of hot water and bake until golden and just set, about 50 minutes. Serve slightly warm or let cool completely. To store, refrigerate covered with plastic wrap for up to 3 days.