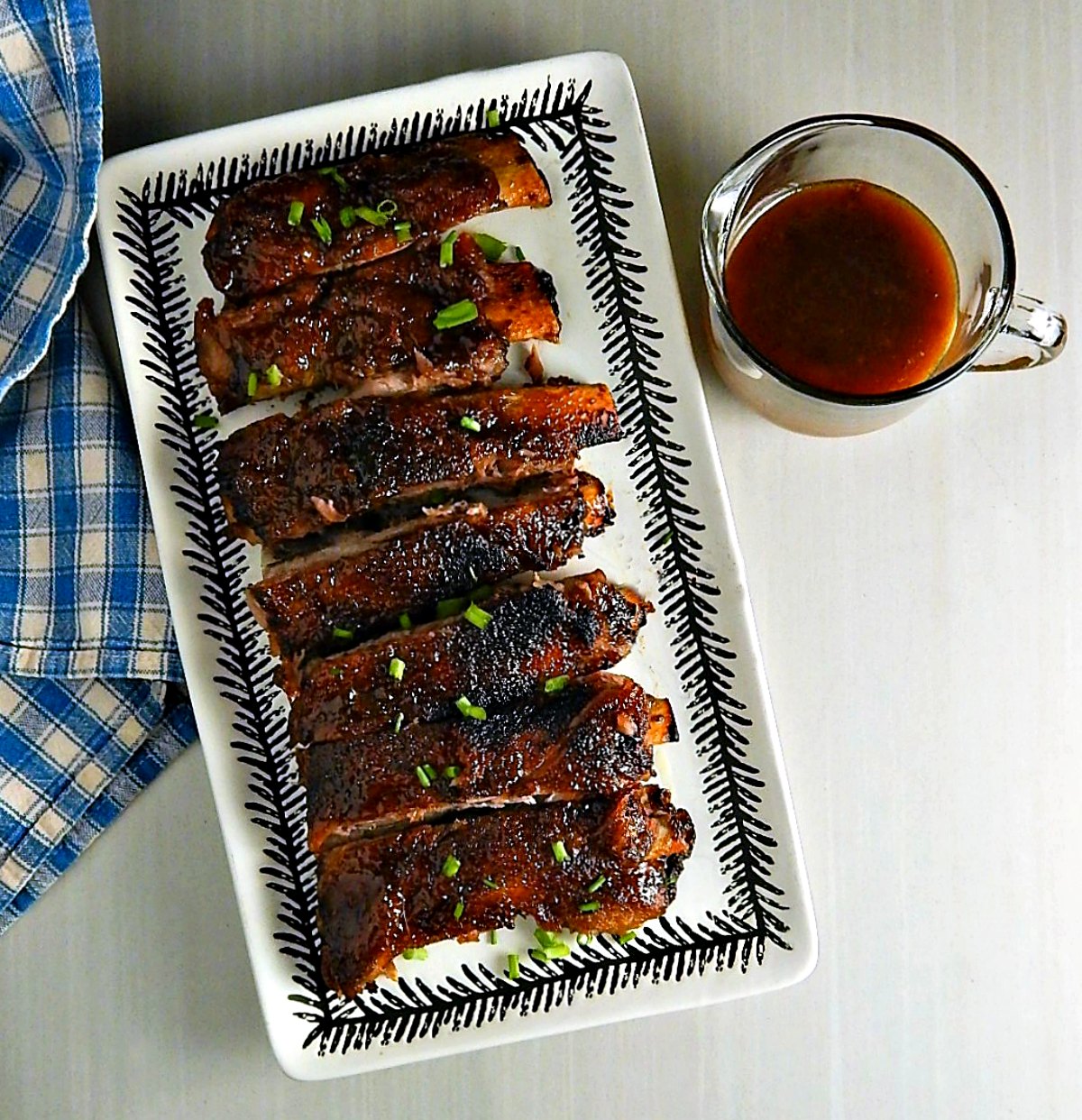 So I was watching Diner’s Drive-Ins and Dives (funny, but a lot of my conversations start out like this) and I saw the most amazing looking food from Tiki Iniki a restaurant in Princeton, Hawaii on their episode International Infusion. They featured their Sweet Sticky Sweet Ribs, and I had to ask myself, “Am I a Sticky Sweet Ribs person?” I was soon to find out, although the recipe I made isn’t the same as the ribs at Tiki Iniki, it’s definitely adapted from their recipe – think of this recipe as a “fabulously frugalized” version of their ribs.

Tiki Iniki, besides looking like an incredibly fun place to eat has it’s own back story. It’s the brainchild of Michele Rundgren, and you might recognize the name. Her husband’s the famed long-time rocker, Todd Rundgren.  Michele had her own career as a dancer for The Tubes and later the world’s “most dangerous”  back up singer. Her personality def shines through in this bar-restaurant and in the food! They recently franchised and there’s a Tiki Iniki in Atlanta, too, so its going on my list as a place to stop by next time I visit my daughter

But let’s get back to the ribs! So I posted the link to the recipe above and iI would have loved to make them as is, but I could see quite a few issues making them at home, especially in Minnesota, and especially in December! So my Sticky Sweet Ribs are a more streamlined version maximizing the ingredients I can get pretty much anytime in Minnesota, which hopefully means you, can too!

So what I ended up with was slowly braised ribs, broiled off so they caramelized into sticky deliciousness. And if that wasn’t enough, they’re finished off with a tropical Mango/lime glaze. Serve with rice and a small, fresh salad or maybe a little coleslaw, as I did. I just used the recipe (simplified) from another DDD episode for Tiger Slaw and added a few pineapple tidbits. And I cut that recipe way back for just a few servings.

You might notice my incredible shrinking rack of ribs in the photos! Hey, when they came out of the braise, I had to try a couple of the puny end ribs. They were fab and I could hardly stop nibbling on them. Honestly, I could have stopped there. But under the broiler they went and of course, I had to taste one as they came out all caramelized! Even better! Then I decided I really should make the glaze…and guess what? I found out I AM a Sticky Sweet Rib person! And that glaze – it just takes everything over the top. It was fabulous on the ribs and even better with the rice.

There was one big surprise! The garlic that came out of the braise was so infused with flavor, so soft and delish, that we used it spread on some little crostini as kind of an appetizer as we finished making the ribs.

You can easily make this for one or two racks of ribs or double for four. Just dump the ingredients for the braise into a pan large enough to hold your ribs. Add in the ribs, give them a turn and leave them with meaty side down. Add enough water to bring the braising liquid just up to the top of the ribs. Then cover and braise for about 2 hours, or until tender when poked with a fork. The fork should be able to just turn. Check hem a few minutes early and make sure the liquid hasn’t all evaporated; when finished, there should be about a cup to a cup and a half of liquid.

Take the ribs out and rest them while you make the glaze with what’s left of the braising liquid (defat it and remove the garlic) a mango, a little lime, and some Mirin. Brush the ribs, broil them. Brush more glaze on when finished or pass the rest of the glaze at the table.

I substituted a mango for the pricey and hard to find guava paste in the original recipe. This recipe would be good made with pineapple (you’ll need about a third or equivalent of canned) or papaya (you’ll probably need two) also.

I really do watch the pricing on ribs and buy only when they’re on sale, which is usually around one of the summer holidays. They’re heavy enough that a variance in the per pound pricing makes a big difference in the total cost. Buy the ribs that are smaller if there are different sizes available. They’re usually from a younger beef and are a bit more tender.

Here in the Twin Cities, and most places I know of, your spare ribs are going to be untrimmed. I always trim them St. Louis Style. See my post on Competition Ribs to see text and photos on how to break them down and prepare them. And whatever you do, don’t waste those trimmings! I have a few ideas on that same post on how to make best use of them and try to put out a new idea every time I trim ribs. A lot of people just use them as a “chef snack” but why, when you can usually get a whole ‘nother meal out of them?

Whenever I cook a pricier protein like ribs, I always try to make sure there are lots of sides. It helps stretch the pricier a bit.

In a pan large enough to hold your ribs, add soy sauce, brown sugar, garlic, ginger, pepper and two cups of hot water. Stir to dissolve sugar, then add ribs, meaty side up. Turn over to meaty side down and add enough water to come up to just the top of the ribs. Stir the water around a bit, cover tightly with foil and braise for about 2 to 2 1/2 hours until the pork is tender. Check near the end of the cooking time to make sure there is still liquid in the pan; you’ll want to end up with about a cup to a cup and a half; the amount will vary if one or two racks are cooked.

Remove the ribs to a sheet pan lined with foil. Allow to rest.

Add mango and the braising liquid (remove garlic first) to a blender and blend until smooth. Place in saucepan. Add water to blender and rinse remaining residue, add to the saucepan. Heat over medium-high heat, stirring now and then until reduced to about the consistency of a barbecue sauce and caramel-colored. Will thicken more when cooled.

Brush with a thin coating of glaze. Place ribs five to six inches under broiler element. Broil, turning as necessary until ribs are shiny and browned in places, about 10 minutes.

Either brush additional glaze on ribs or serve with remaining glaze. Garnish with green onion.