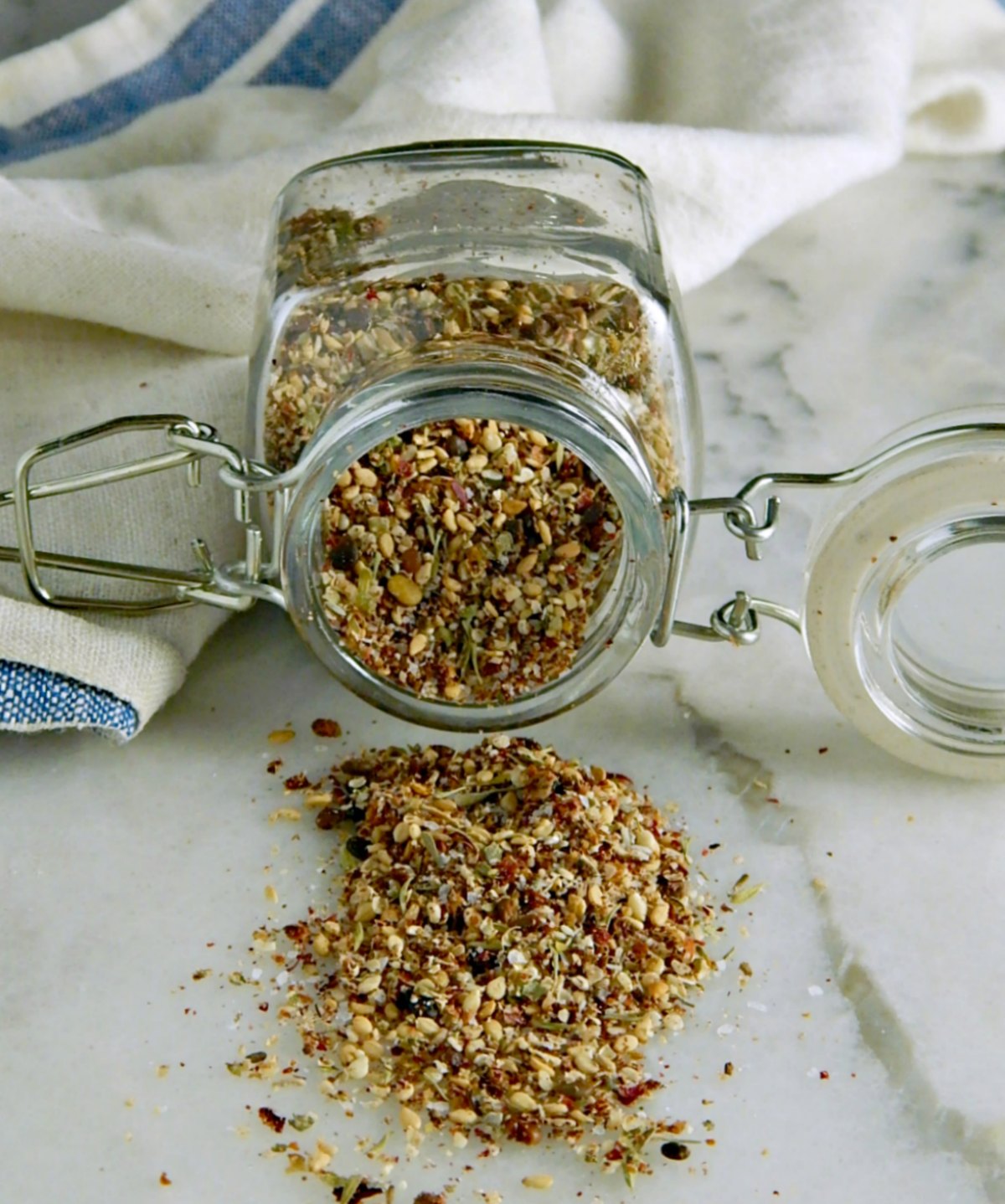 There’s a spice mix I’ve seen mentioned more and more in magazines and online. Za’atar. And while it might be new to a lot of people in the US, it’s not new at all. Za’atar is even mentioned in the Bible and refers both to the herb and the spice mix. And Za’atar is used in all kinds of cooking throughout the Middle East, the Mediterranean and other areas. And now, maybe it will be used in your kitchen and mine, with this homemade Za’atar spice.

Za’atar can be very basic or contain a number of spices, and typically in many families, the recipe is handed down throughout the generations and is a closely guarded secret. It almost always has some kind of thyme or related herb (that’s the za’atar) generally a nut or seed, often toasted sesame along with maybe, a little salt. And many versions have Sumac, prized for its lemony flavor.

When I was getting ready to make Za’atar, I had to stop by and see if my friend, Elaine, at her site Foodbod, had anything to say about Za’atar; she shares my love of making fresh, homemade spice blends. And yes, sure enough, she has a page on Za’atar, so check it out; one hint in particular: If you’re making a dish that calls for thyme, try sprinkling on a little Za’atar instead. Hey, mo’ flavor, mo’ better, imho!

I played around with my proportions to my own taste and added a little salt (and some red pepper flakes, not shown, to a part of my Za’atar) because I wanted to use it as a kind of finishing spice on some Honey Roasted Feta. I wanted that Za’atar to have a bit of zing. You can use your Za’atar sprinkled over soup, meats, hummus, your avocado or hummus toast, even on my homemade Baked Pita Chips, or in just about any direction your imagination takes you.

Don’t feel you’re limited to that, though. Za’atar can be used in olive oil, as a mixture to dip into, or flatbread can be dipped in olive oil and then sprinkled with Za’atar to make Man’ouche. You can add Za’atar to your marinades, use it in Honey Glazed Carrots, add it to dips, really, there is no limit.

Za’atar is simple to make, and the most basic contains spices and herbs you’re probably familiar with. There’s usually thyme, oregano and/or marjoram. I love using marjoram, so a little went into mine, along with the thyme. Sumc might be a little more difficult to find and is optional in many Za’atar blends, but I love the taste so it goes into mine. If you are grinding whole sumac berries, do a good job; some are hard enough to break teeth!

Other recipes might contain savory, cumin, coriander, caraway or fennel seed. And while it doesn’t seem to be strictly traditional, a lot of recipes contain red pepper flakes. You can always start out with the basic recipe and build from there.

You’ll want to toast any whole spices, like the sesame seed, or the sumac if you grind your own, then let them cool before grinding. Coffee grinders seem to be a little cheaper than “spice grinders” but pulsing spices in a blender, using mortar and pestle or grinding between two heavy pans works well, too, although the latter probably won’t be easy if you’re using sumac berries. Just a hint: to clean out your spice grinder, grind up a little bread, empty and repeat until any residue is all gone.

I love making my own spice blends. I love customizing to my taste, love the freshness and quite often making your own is a lot less expensive than buying a blend.

I do grow a lot of my herbs, so have most of them in abundance. Usually, a plant is less than most little packets of herbs from the grocery store, so I plant in spring and bring my herbs in during the fall season to overwinter. Even if I happen to kill it, I’m still ahead because it can still be dried. When I buy spices that I don’t use often, I look for them in the whole form. They’ll keep practically forever in a tightly closed jar in a cool, dark cupboard.

If you have a Middle Eastern Market near you, stop in. You might be amazed by some of the prices. I’ve been wanting to make Za’atar for some time, checked the price of Sumac berries online and was horrified! And I wasn’t willing to pay the price for Za’atar online. And while Za’atar was inexpensive at the market, sumac was even cheaper, which is odd, because sumac was the priciest ingredient. That’s one thing to think about when buying spice blends – if the ingredients are almost all common everyday spices, the spice blend shouldn’t cost more than the most expensive ingredient.

Toast whole sesame seeds and whole sumac berries in a hot pan until fragrant, shaking often. Cool and grind. Mix with the remaining ingredients. Seal in a tight jar and keep in a dark cupboard.

This spice blend may be left “chunky” or ground finely as you desire. Do watch the sumac berries; they can be very hard and need to be broken down so there is no danger of injuring a tooth.

I’ll be sharing Homemade Za’atar Spice at Fiesta Friday #284, hosted this week by Diann @ Of Goats and Greens and Petra @ Food Eat Love