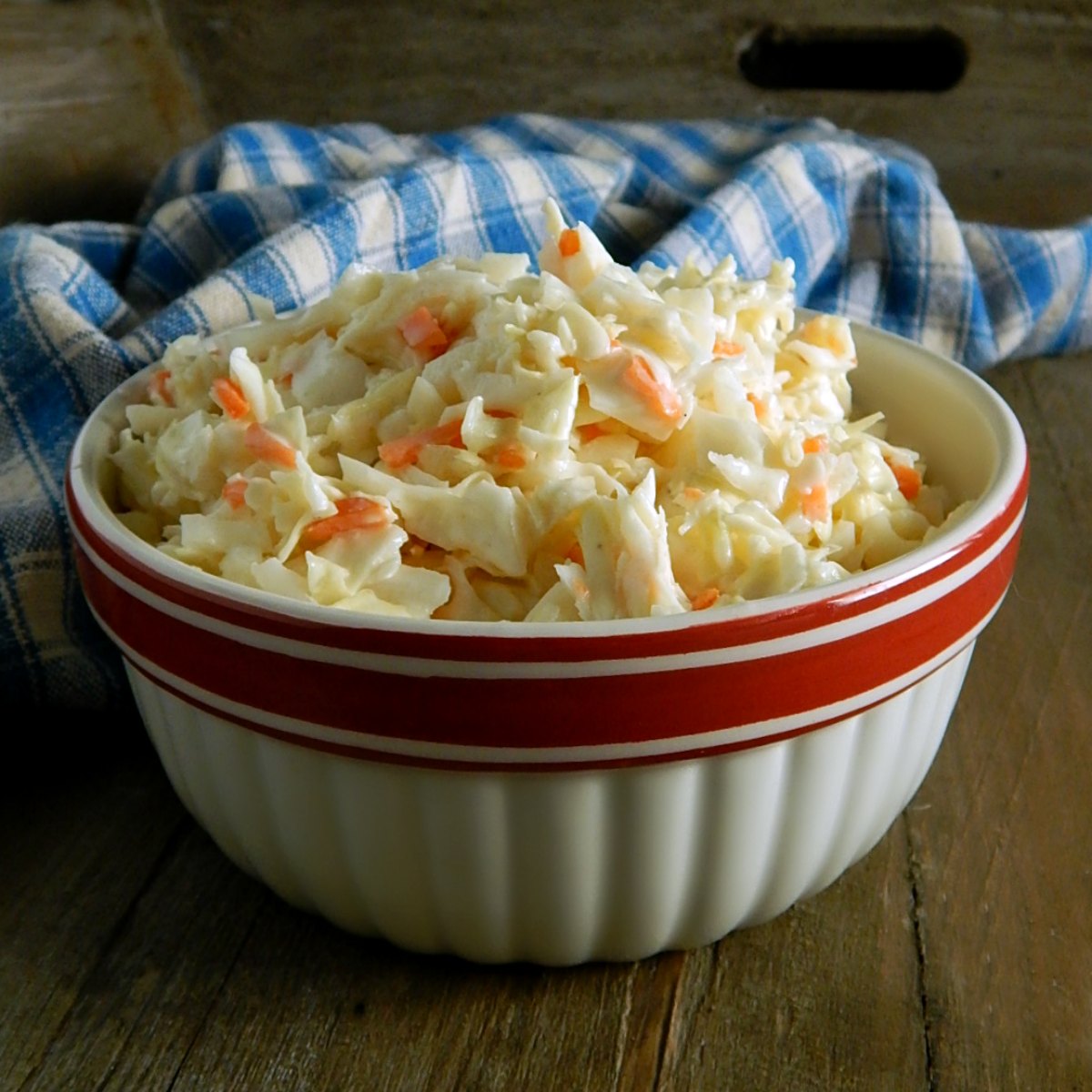 I make this Kentucky Fried Chicken Coleslaw Copycat months ago and have just been waiting for summer to post it. Because frankly, no one wants coleslaw in October, amirite? I promised it a while back when I made my Bourbon Barbecue Pot Roast Sandwich. So finally, here it is…

Personally, I will eat coleslaw just about anytime. I just love the stuff in just about any form (I have quite a few recipes on my blog and you can click here to see them all) but I particularly love my Kentucky Fried Chicken Coleslaw Copycat Recipe.

Kentucky Fried Chicken Coleslaw is a coleslaw that’s kind of in a class of its own. For one, the dressing is sweet and thin, and so good by the time you get to the bottom of your little serving, you’ll just about want to drink all that liquidy goodness at the bottom. Kentucky Fried Chicken Coleslaw also has a cut that’s quite a bit different than most coleslaws. It’s not grated and it’s not shredded, it’s cut into tiny little pieces. That took a bit of doing to copycat, at least in a way that’s easy for home cooks like us to duplicate.

There are a lot of Kentucky Fried Chicken Coleslaw Copycat recipes out there. And I looked through & made many of them, including one from the famed Todd Wilbur, author of so many Copycat recipes. I relied heavily on his recipe for mine and tweaked it only slightly. I also came across one that was maybe a bit closer to KFC’s than I wanted. One from Mashed that included Xantham Gum. Yeah, I’m skipping the additives, thank you very much!

There’s one thing that’s very weird about this coleslaw. When I made it the afternoon I swear it tasted exactly like KFC’s. Then I had a little later on with dinner (about two hours later) and it tasted nothing like Kentucky Fried Chicken’s Coleslaw. Bummed, since I had a considerable amount of coleslaw to go through (although I made half a recipe it was still a lot.) I tried it the next day – and it was back to tasting like KFC’s. Was it just me?  Or did the coleslaw actually morph over time? At any rate, I’d make it the day before if you’re not having it right away. Besides, cole-slaw is always better if it sits.

There’s really nothing to making the dressing for this recipe, it’s the chopping of the cabbage and carrots that takes some time. See KFC’s coleslaw is diced into small squares, so I’ve given some pretty precise hints on how to do that. Whether using a food processor slicer or slicing by hand, you’ll want to cut and stack the slices, then cut through them with your knife, first in one direction, then at right angles.

The dressing is super easy, but there is always a variable. Depending on how moist your cabbage is and how much water it gives off, your dressing can vary in how thick or thin it is. As I mentioned above, this coleslaw is best made ahead, at least by several hours and preferably overnight for the best taste. After it sits, you can better judge whether or not, at that point, the dressing needs to be thinned with a bit more milk.

If you don’t have and won’t use tarragon vinegar again, don’t sweat it. Just use plain old white or apple cider vinegar. You’ll still be very close.

Cabbage is pretty cheap as far as vegetables go, but you’ll want to watch the pricing and whether it is by the pound or by the unit. If you can’t find a small cabbage, which will yield about 8 cups of diced, just wrap the cabbage loosely and put it in your fridge veggie drawer. If it develops any discoloration, cut it off; it’s harmless.

Watch for you Mayo and other condiments to be at a low during the summer sales, especially around summer holidays. Stock up for the year – there will be sporadic sales other times of the year, around the Superbowl is one, sometimes March Madness, but nothing beats the low summer prices.

Vinegar, even the fancier ones, is usually at a low during the pre-Easter sales, often unadvertised, and may be on sale now and then through the summer. If you like to make your own dressings, stock up.

For best flavor, cover the coleslaw and let sit several hours or overnight in the refrigerator.

Core cabbage and cut into large pieces to fit into your food processor. Using the slicer blade, slice in batches. Remove the slices and run a knife through the cabbage, first crosswise, then at a right angle to the first cuts to break it down into small squarish pieces. If you’re careful, you can remove the majority of the cabbage from each batch in a stack. Just try to gather it together as you pick it up, then it’s short work to cut through the cabbage slices at once. As you cut, remove the cut up pieces to a large bowl so you have space to work with on your cutting board. If you don’t have a food processor, just cut slices by hand, about a 1/4 inch thick, several at a time, then stack and run your knife through them.

Use the same process for the carrots, slicing, roughly stacking and then mincing them.

Mix all ingredients together, starting with the 3/4’s cup of milk. Pour over the cut cabbage and carrots and mix to blend. Let sit for several hours or overnight, then stir, adding a little more milk if dressing needs to be thinned.