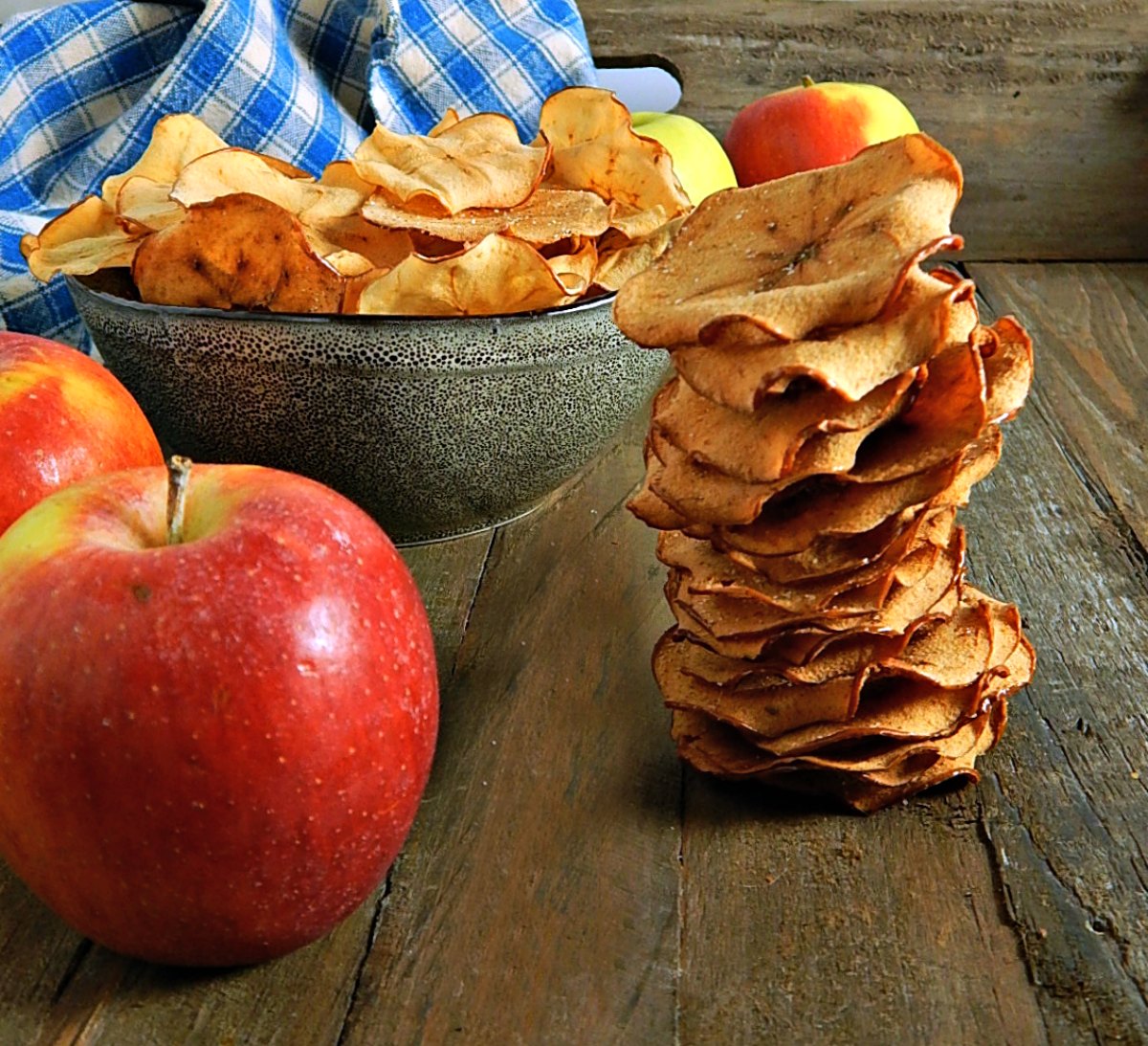 You might think I’ve been living under a rock. I didn’t know about Oven Baked Apple Chips. Please tell me I’m not the only one? I thought that they were like the leathery, dehydrated apples and were just renamed as a gimmick. I thought, “What’s the big deal?”

I’m going to tell you a secret. Well, don’t get too excited, it’s just that I like apple chips a heck of a lot better than apples. Don’t get me wrong, but sometimes apples just don’t really do it for me. Unless it’s a Haralson. But apples are kind of an effort to eat and sometimes they sit on my counter for longer than they should. And they mock me. Yep, they do. They’re like “Eat me, do something with me” and I swear they give me the side-eye every time I walk by.

But Oven Baked Apple Chips are crazy good and before I knew it, I had eaten about two apples worth! Then I had to stop myself because as easy they are to eat, and as easy as they are to make, they do take about an hour in the oven and you can only make so many at a time. The caveat is that making Oven Baked Apple Chips IS super easy, but only if you have a mandoline or some kind of slicer. You’ll want them very thin or you’ll be baking them for a lot more than an hour and it will be hard to get them really crispy. You do need to know that the Oven Baked Apple Chips don’t STAY crispy when stored. They are a fleeting thing so get your fill the first day!

I made three trays, trying different methods and one was flavored with Cinnamon Suger (I was glad I had made up a batch of Homemade Cinnamon Sugar the other day) and the rest were plain. You’ll see the difference in color in the photos. Hint: The darker ones have the cinnamon sugar. They were both great! With dried apples, you probably want to treat to keep them from getting a strange brown color, but you can see from the beautiful lighter colored apple chips that it wasn’t necessary in this recipe at all, and that means the plain ones were just pure apple flavor.

The biggest things to know about making Oven Baked Apple Chips and having them turn out crispy crunchy delish is first, they have to be cut thinly and the second, you have to cook them correctly on either a rack or parchment paper to get that gorgeous wavy texture and get them dry all the way through. Know, too, that the apples crisp a bit more as they cool and that’s best done in the oven, once they’re done, with the oven turned off. You’ll be tying your oven up for about two hours.

I tried a few thicker cut apples, but they literally took hours and still didn’t have the crispness I wanted so after that fail I pulled out my mandolin and cut them on the smallest setting, about 1/16th inch. You could literally see right through the apples. There’s no need to peel and the apples curl better if you don’t and when they’re cut so thinly, they don’t need to be cored or seeded, either. If you’re going to cut by hand, you’ll be hard-pressed to cut your apples that thinly. If you go for about 1/8th inch cuts, plan on baking these apples a lot longer and getting still delish but not as crispy apple chips. I found thicker ones took about 2 hours and then the cooldown.

I was able to make about three trays at a time because I cheated my oven shelves a bit and had several big sheet trays. When sliced and spread out, an apple will cover a large cookie sheet or a rack like you see in the pics, packed tightly in rows. So one apple per tray. I didn’t care for the apples done on a sprayed sheet tray. They just didn’t curl right and were very delicate – they crumbled. Do NOT attempt that! The best ones were done on a rack and the next best were on parchment.

In order to do more trays than my oven had racks, I took a bit of aluminum foil and crumpled it into four balls. I put a ball on each corner of one tray and stacked a second tray on top of the balls so I had a two “story” thing going on. 4 empty cans would work great, too, if you have them and might be a little more stable. Maybe you have another idea? Scavenge around your kitchen and see what might work to make your own two-tiered tray. I thought about cooking directly on my oven racks but I could see that the smaller slices might have fallen through as they shrunk, and these do shrink a lot.

When I cut my apples, you could literally see through them and that mandolin came in so handy. If you’re a frugal cook, you probably realize the mark up on all kinds of prepared items, especially things like frozen fries and many other items that are hard to get just the right cut on at home. That’s where the mandolin comes in so handy. Mandolins used to be super pricey and some still are, but the prices are so much more reasonable these days.

I bought my first mandolin – well it was really more of a “cutter” at a second-hand store for $4.99 and used it for years. It was white plastic and over the years it discolored, cracked on one corner and was stained orange from making marmalade and after I left it next to the stove and started it on fire (yeah, really stupid move!) I upgraded. Guess what? I liked my $4.99 one a lot better than my new fancy one. So if you need kitchen equipment, get in the habit of stopping by second-hand stores regularly and scoping out the kitchen aisles. The chances that you’ll find just what you want on any particular day are slim, but if you go often, sooner or later, something you want will show up.

As far as apples, pick your own places usually have great apples priced for less than you can get them at the grocery and usually have bags of apples already picked. If not, look for specials at the stores, check Costco and Aldi. Now, in the fall is the time to cook with apples – they’re seasonal and cheap! And some of the best apples for baking are the common Granny Smith, the green ones, and they’re always among the least expensive apples. They’re tart and sweet and made wonderful Oven Baked Apple Chips. But experiment with different apples for this recipe – there’s just a subtle nuance that comes through with each variety. Note that most apples start coming out of gas storage in January and February and you might see some sales.

Preferably using a mandoline, slice apple chips very thinly, probably on the finest setting, about 1/16th of an inch. Place on a sprayed rack (preferred) or a parchment-lined sheet tray. Sprinkle with cinnamon sugar if desired.

Place in oven, immediately turn down to 250 degrees and bake for about one hour, turning the apple slices over and rotating trays top to bottom & front to rear halfway through the baking time. If using cinnamon-sugar, sprinkle again after the apple slices are turned over.

After the hour is up and/or the apples are lightly browned and crisping, turn the oven off, crack the door and let cool in the oven. Apples will be crispier after they cool.

UPDATE: Just to repeat the directions for emphasis. You HAVE to “slice apples very thinly, preferably on the finest setting, about 1/16th of an inch”  and bake as directed on “a sprayed rack (preferred) or a parchment-lined sheet tray” and “Timing will vary depending on your oven and the thickness of the apples.” They will not work right baked right on a sheet tray w/o parchment.

Do watch carefully the first time.