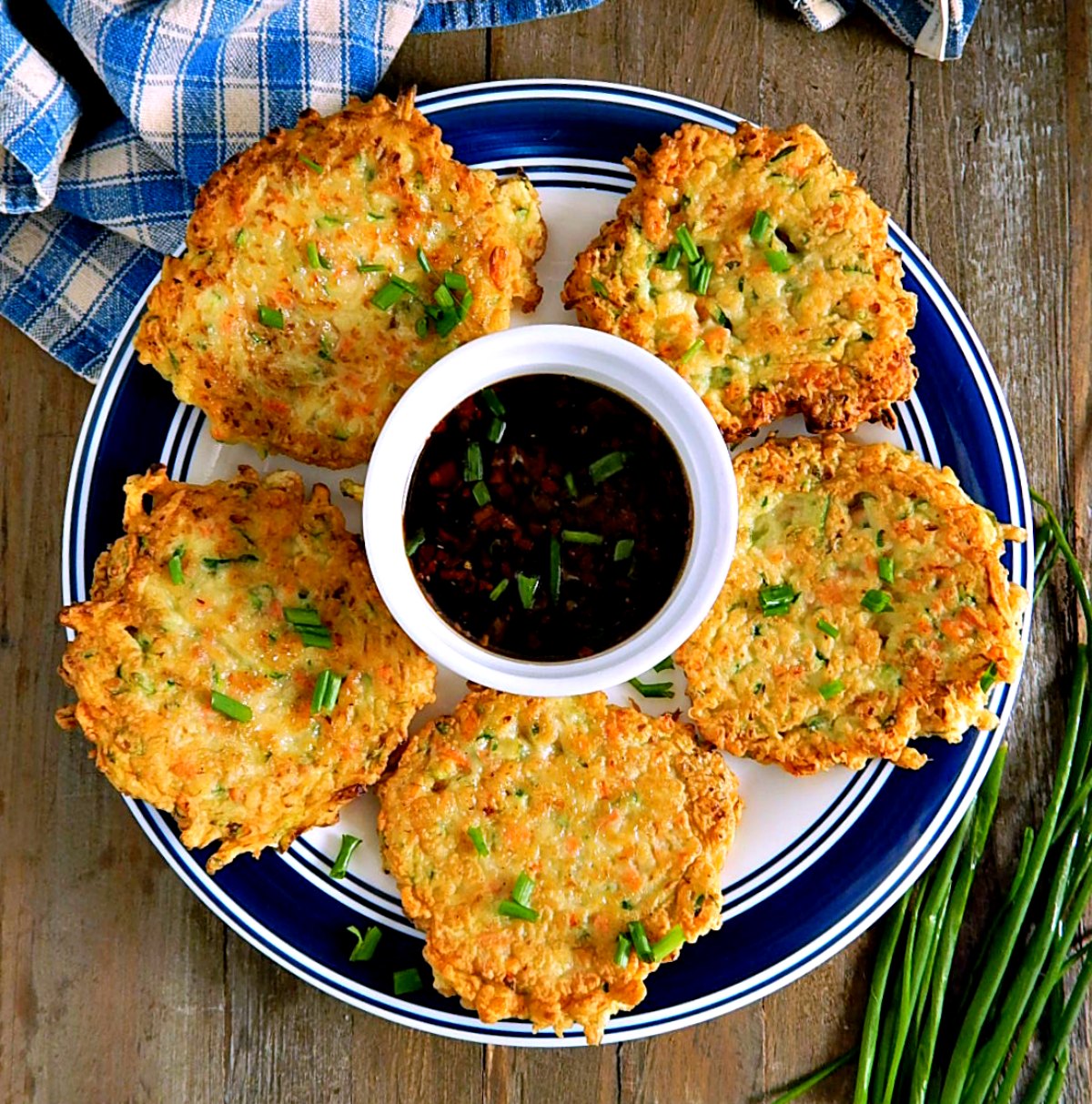 I had a couple zucchini in my fridge. I know I bought them for something specific, but who knows what that was! I usually have a menu for what I plan to eat & make, but in typical fashion, lost the list. Oh, the joys of getting old! But that all might have been for the best because instead, I made Crispy Zucchini Fritters.

These Crispy Zucchini Fritters are pretty scrumptious and might be just the thing if you have zucchini still producing in your garden. As bitter, cold and rainy as it’s been up here in the “Nordland” it’s hard to believe it could be warm anywhere! I spent part of the afternoon digging up some of my herbs to bring inside and was so chilled I crawled into bed and pulled the blankets up to my chin while I watched some tv before I went out for another go at it! It seems trivial to complain when Hurricane Michael is devasting our Southern states and the death toll so far is at thirteen.

First of all, I want to qualify the Crispy in the Crispy Zucchini Fritters. While these do have a crispiness, and I pulled out all the stops in making them crispy, they’re not going to be crispy crunchy like a potato chip. But they’re not going to be a soggy mess like some of the zucchini recipes I’ve tried over the years. Hello, stupid zucchini cups and oven baked zucchini fries! I’m talking about you guys. Hey, they both sounded like a good idea at the time!

You’ll also want to serve Crispy Zucchini Fritters asap so they do retain all that hard-earned crispiness, though. These won’t hold for a long time. I served mine with My Favorite Asian Dipping Sauce which made such a nice contrast with the fritters.

I’ve seen recipes here and there for different zucchini fritters, but it wasn’t until I saw Korean Zucchini Pancakes on a Diner’s Drive-Ins and Dives show that I kind of went nuts and appropriated one of the zucchini in the fridge. I just knew I had to make them and make them now. I didn’t use that recipe, though, but went a little rogue because I wanted that crispiness.

There really isn’t much difference in the Korean version of a Zucchini Fritter than any other version – kind of like my Korean Pancakes are pretty similar to a Latke. Both are super delish and either would make a good appetizer, done in smaller sizes. If you’re thinking about making Crispy Zucchini Fritters for dinner, you might want to make more depending on how many are in your family. This recipe makes five smallish fritters.

If at all possible, use a food processor to grate the zucchini & carrot in a food processor, and when you do that, push it through hard and fast. That’s going to give you the best shreds to use for the Crispy Zucchini Fritters. I didn’t take a pic, but I do have a pic of zucchini done this way at the bottom of the page of Sparrow Tavern’s Veggie Burgers.

Then take those zucchini and carrots, put them in a strainer over a bowl and add about a good teaspoon of salt and mix it around a bit with your hands. Let it sit for about 10 to 20 minutes then either push it against the side of the strainer or even better, put it in a clean towel and wring it to get out as much moisture as you can. Warning! The carrot will probably turn your towel orange so don’t use a good one! When you make your batter you might have to add a little moisture back in, but that’s one of those “we’ll see” kind of things.

And while you might not think the oven time is important, it’s a key thing to get and keep these little fritters crispy. Just a few minutes, low and slow to prevent any sogginess. It might be hard to wait, but trust me on this!

Just a few years ago, we couldn’t even buy zucchini in a grocery store here in Minnesota. It was considered to be such a garden veggie that the stores didn’t even carry them. We can now, but if you don’t grow your own, the farmer’s market is going to be your best bet for picking zucchini up on the cheap.

Carrots are a different story. They keep so well that it makes sense to buy the larger bags; the price per pound is almost always less than the one pound packages. Make sure to keep them from making solid contact at the bottom of the veggie tray in the fridge. If your humidity drawer has ridges, put the carrots in at a right angle to those ridges. I always rip a hole in the plastic bag to let out the moisture and now and then when I open the drawer, I’ll turn the carrots over so they’re not always sitting on the same side.

Preferably use a food processor to grate the zucchini and carrot, pushing both through hard and quickly. If a food processor isn’t available, use the large holes of a box grater, pressing firmly so as to get long shreds. Place grated zucchini and carrot in a strainer, over a bowl, add salt, mix together and let sit for about 10 to 20 minutes. Place in a clean towel, wringing to remove as much moisture as possible.

Add to a bowl along with the onions. Add the egg, mix in. Add the flour, cornstarch, and baking soda and beat thoroughly together for a minute or so until the mixture becomes thick like a pancake batter. It should be “gloppy” and thick enough to have to nudge a bit in order to get it to spread. If necessary, add in a little water. Use the batter right away or it can thin out from the moisture of the veggies.

Place oil in pan and heat over medium-high heat. When the oil is hot, working in batches if necessary, use a third of a cup scoop or measure, place dollops of the mixture in the pan and nudge into a circular shape about 3 to 4 inches across. Cook slowly until golden brown, turn and cook the other side. The mixture should be cooked all the way through. If not, lower the heat in the skillet.

To crisp, place on a rack in the warm oven for at least 10 minutes, optional.

Serve immediately, with Asian Dipping Sauce or other sauce of choice, garnished with thinly sliced chives, green onion or cilantro.