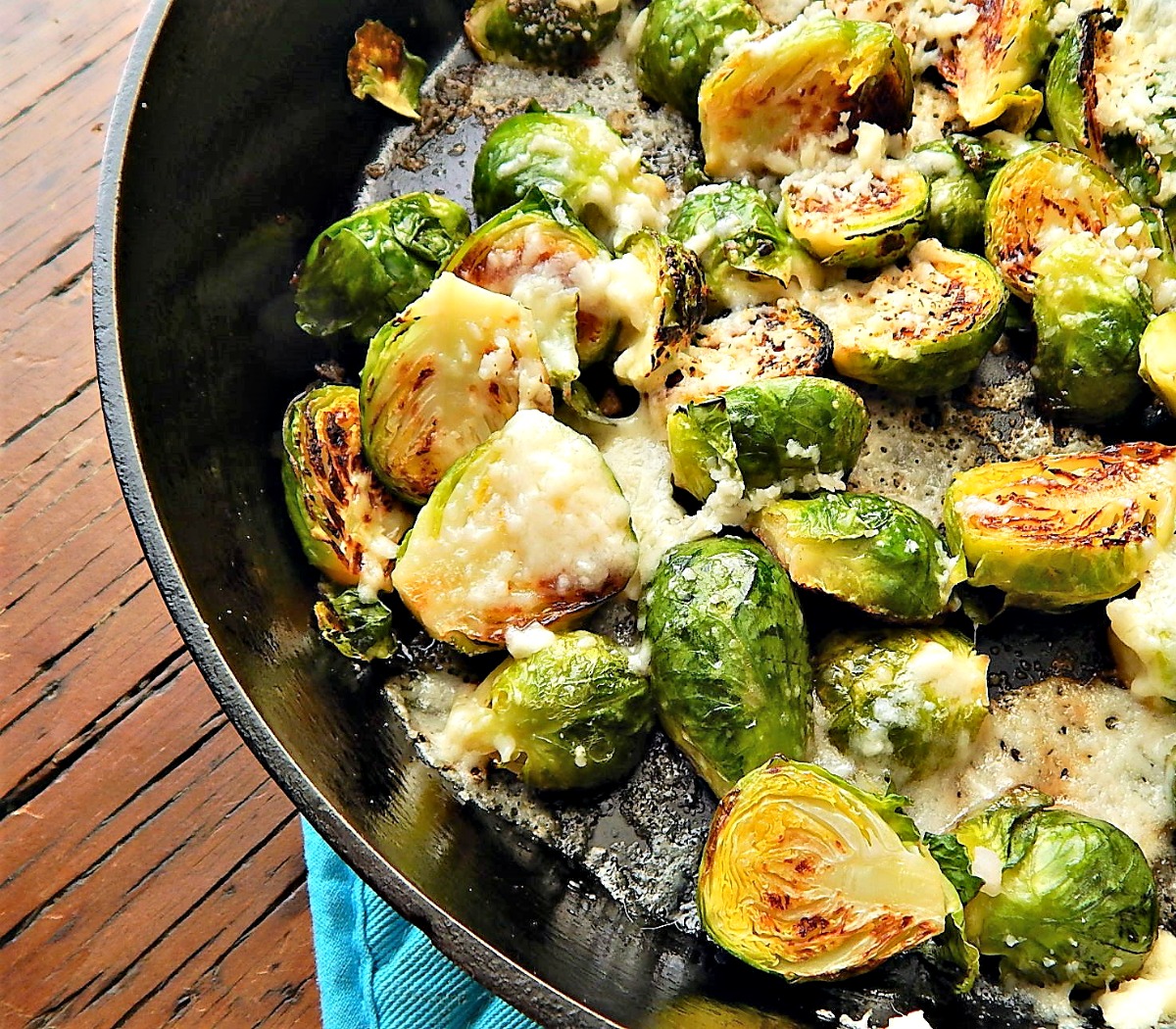 When I made these Skillet Roasted Brussels Sprouts With Parmesan Frico, I was thinking about the food I usually make for my blog. As a food blogger, one thing I seem to fall short on is “side” dishes, especially vegetable side dish recipes.

I’m probably like a lot of you guys. I’m just busy, and too often take the easy way out and steam or microwave my veggies. About 9 times out of 10. Other times I’m making a one pan, sheet pan or skillet meal. Hey, sometimes it’s just about getting dinner on the table.

There’s no excuse not to make these Skillet Roasted Brussels Sprouts, though. They’re fast and easy enough for any old weeknight or anytime you want to go just a little fancier with a side.

Sure, these Skillet Roasted Brussels Sprouts With Parmesan Frico are great for company or a holiday, but there are only a couple of simple ingredients. It’s the cooking method that is responsible for the over the top deliciousness.

If you’re wondering about the “Frico” part of this recipe, Frico is basically a “cheese crisp.” As the cheese gets melty and drips over these Brussels to the bottom of the skillet, it forms all this golden brown deliciousness and “crisps” up. Can you imagine?!

When shopping for Brussels, check the stem – they tell the story. If leaves were old and removed, you’ll see longer stems with scarring. The bud of the sprout should be tight, firm, fresh and green. Brussels Sprouts are common enough, now, to go on sale regularly.

As far as cheese, it’s a pain to grate, but that’s usually the best option for pricing and freshness. If Parmesan is high, take a peek at Romano. It’s a bit more assertive, so a little goes a long way and it is usually cheaper than Parmesan. That’s a bargain in my book.

This recipe is easily increased.

Uncover and toss about a tablespoon of water in the skillet, tilting the skillet to distribute the water. Allow to cook until the steam evaporates, about a minute. Remove Brussels with a thin spatula, scraping up the cheese along with the sprouts. Serve immediately.

I’ll be bringing this recipe to Fiesta Friday #211, and the cohosts this week are Lily @ Little Sweet Baker and Alisa @ Livin’ Well.