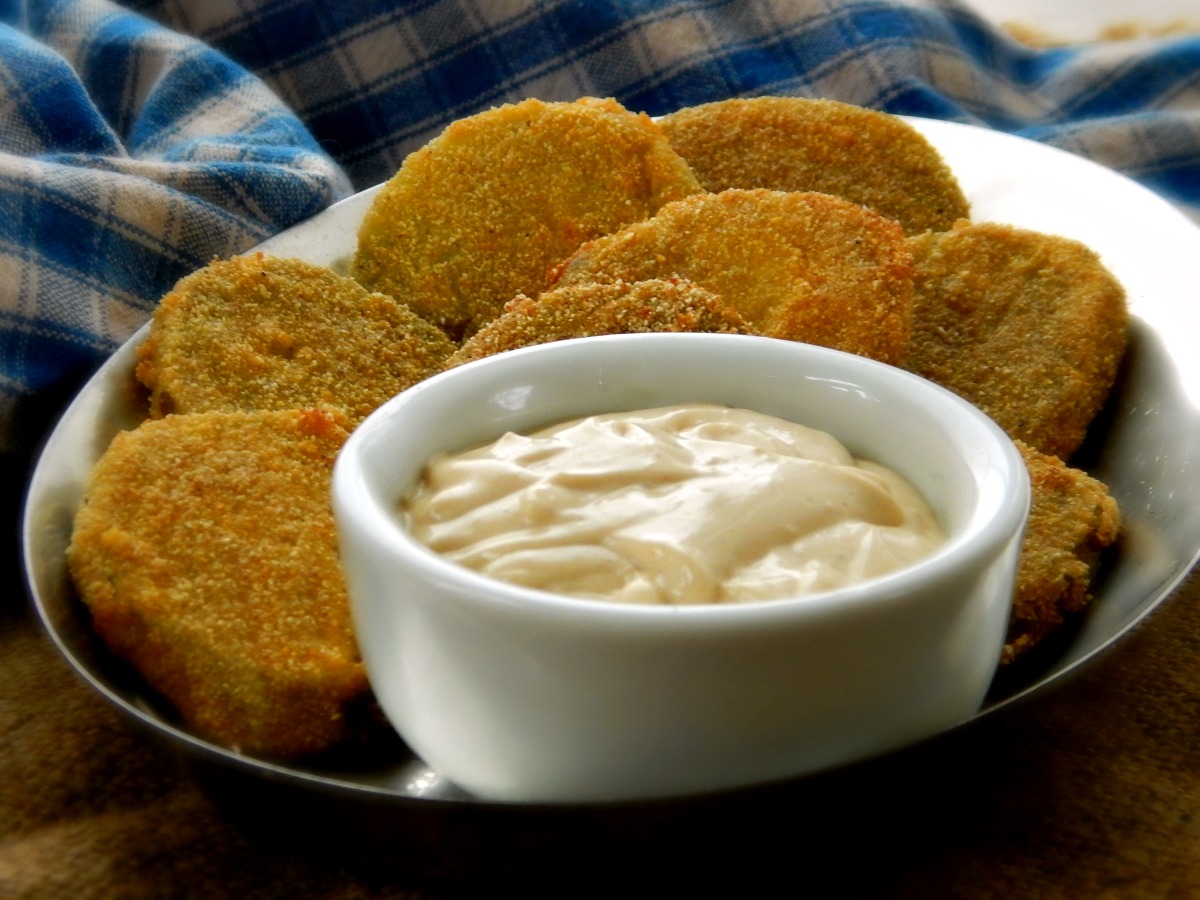 I’m probably whining, and I don’t care. I’m going on record here to say “I feel cheated.” What can I say? They don’t sound that great. At best, Fried Green Tomatoes sound like they might be some kind of quaint and charming Southern thing. You know, like maybe you have to be born there and grow up eating them to like them…yanno, no matter where you grow up, you have those kinds of recipes. The one no one else “gets.”

And so I was floored by the first hot, hot bite! (Let them cool just a bit before you eat them, by the way.) I was all but undone by the slightly firm yet yielding tomato, which was all juicy, tangy (no one said a thing about tangy!) deliciousness, but then to be enveloped by that crispy, crunchy, slightly spicy (in this case) exterior…my knees practically went weak. (This kind of thing might be why I’m a food blogger and always having to go on diets, lol!)

Add in a dipping sauce, in this case, a creamy but just a little bit sharp Remoulade, redolent of spicy mustard and horseradish, and Fried Green Tomatoes with Spicy Remoulade are the kind of thing you’ll make, eat, and then make again because you just want more, more, more. See, I’m practically going manic with the memory and those run-on sentences are proof. They’re just crazy good.

So maybe now you’re wondering “Why on earth a Northerner who never had Fried Green Tomatoes before is posting a recipe?” Hey, I get it and deserve it! I will say this, I throw down some food! I mean just look at the pics. How that crust clings, not too heavy but with no “shiners” and I even tossed in a photo of one that was a little less than perfect, where the crust slightly separates from the tomato, all in the interest of full disclosure. I could have just taken bites, then photos all afternoon long…then I could show you all perfect photos and bonus: I wouldn’t have had to share any with my fave octogenarians, the folks. They loved them, too, especially my Dad!

I looked at a kajillion recipes before I made these; so many I just kind of absorbed them all and spit out this one. So I didn’t really rely on one, but kind of took hints from everyone and added a few of my own touches. So I guess I’ll collectively thank all you generous Southern cooks who’ve shared, and at the same time, ask ya’all – why did you never say just how darned good they are?

The real important thing in making these Fried Green Tomatoes with Spicy Remoulade is to salt those tomatoes and firmly blot off that excess moisture. And the sugar isn’t just there for sweet although the taste of that tangy tomato with a touch of sweet, and then the hint of spice sets all the taste buds firing off. It helps draw moisture so that crust forms beautifully and clings. After that, it’s pretty much your standard three-part dredge, just like you’d use for fish or anything else with a cornmeal crust. Flour, buttermilk, then cornmeal. Shake each off a bit in turn after it’s dredged. A heavy crust won’t do anyone any good. It’s kind of counter-intuitive, but It will just bubble up, separate and fall off.

Our tomatoes came off the vine, missed during the frenzy of gathering before the first hard frost. When I read the best Fried Green Tomatoes are made from tomatoes kissed by frost, I went looking for strays.

Unless you’re growing your own, have a friend who does, or can talk someone at the farmer’s market to pick some early for you, I don’t know where you’ll find green tomatoes but find some. If not this year, then next! 🙂 I haven’t asked my family down South if you can buy tomatoes green at the store. I’m thinking maybe in some areas you can.

For the Fried Green Tomatoes:

For the Spicy Remoulade:

For the Fried Green Tomatoes:

Slice tomatoes as evenly as possible, place in a single layer on a rack and sprinkle with about half the salt. Turn and sprinkle with the remainder. Let sit for about 15 minutes (with a sheet tray or paper towels under the rack, if you prefer, to catch the moisture.)

After the tomatoes have sat, with a clean towel or paper towel, firmly blot off the excess moisture from both sides. Very lightly sprinkle both sides with sugar and as much pepper as you’d like.

Meanwhile, pour oil to a depth to come up nearly to the top of the tomato slices into a cast-iron skillet or another heavy pan (or electric frying pan) and heat to 375°. F. Gently place the tomatoes into the hot oil, and working in batches, cook for about two minutes per side or until golden. Drain on paper towels or a rack. Sprinkle with a little salt while still warm.

For the Spicy Remoulade:

Simply mix all lingredients together. Cover and refrigerate for about an hour if time allows. Taste and adjust to your liking.i

I’ll be sharing this recipe on our very own Throwback Thursday Link Party as well as on Fiesta Friday. The co-hosts are Judi @ cookingwithauntjuju and Maggie @ Spoon in a Saucepan