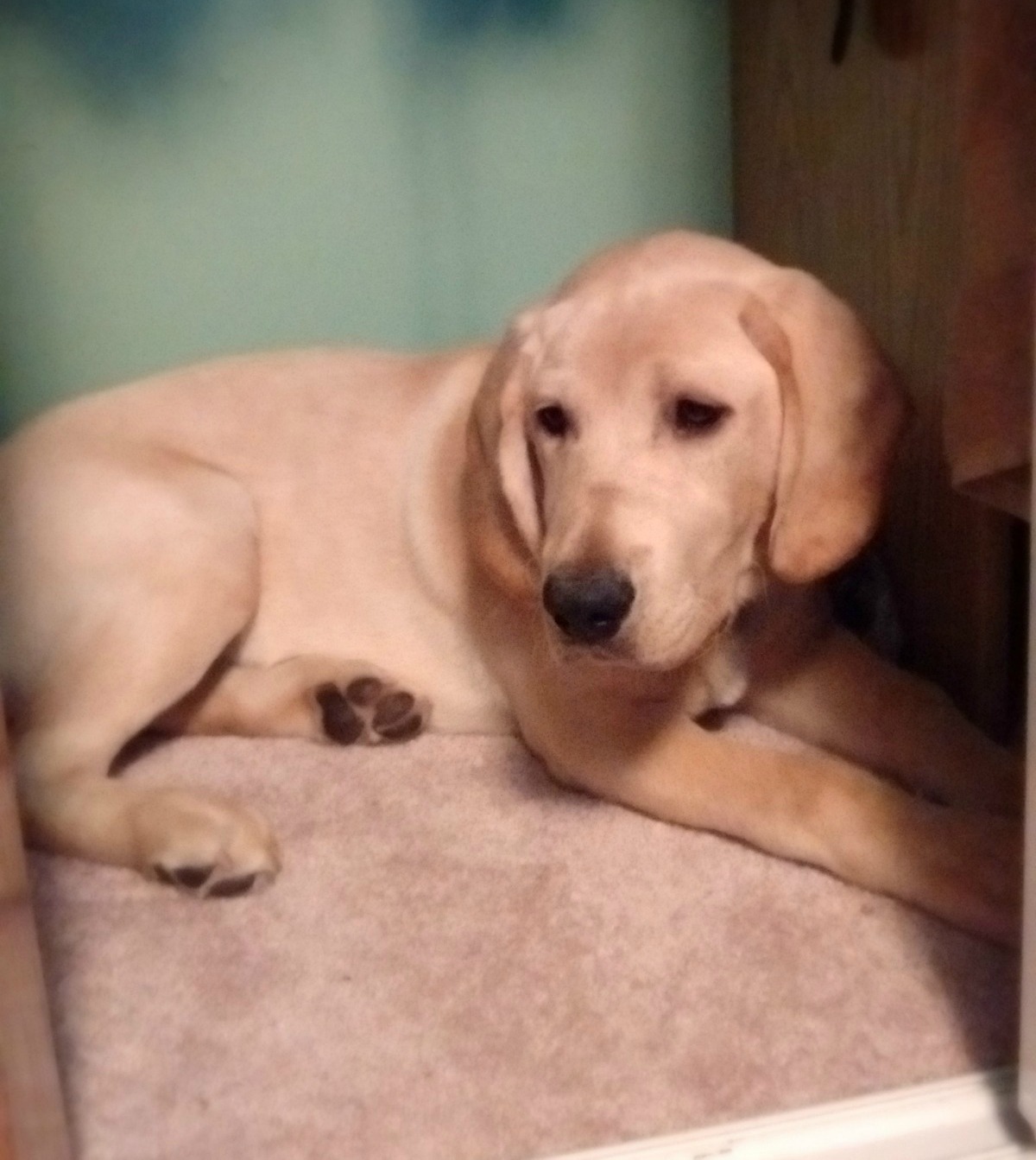 “Sometimes the slightest things change the directions of our lives, the merest breath of a circumstance, a random moment that connects like a meteorite striking the earth. Lives have swiveled and changed direction on the strength of a chance remark.”
― Bryce Courtenay

Chance, you know, if you’ve been following, is a bit of a special case. He’s growing like a weed, wildly rambunctious and shall we say, a bit sassy. Some of it’s pretty normal puppy adolescence (he’s just five months, today) and some seems to be fall out from his earlier treatment as a puppy and confinement for his separated hip plate during key socialization periods. And some of it, I’m sure, is from mistakes I’ve made…yikes!

Chance’s last vet visit on the 8th weighed him in at 48 pounds, but now, I have no idea! Probably about 60 at least. His shoulder’s nearly to my knee, and I have long legs, and one minute you’d swear he was turning into a mature young gentleman, the next he’s a big gallumping giant puppy! A little unpredictable and a bit lacking in manners and socialization would be putting it mildly…oh, Lord, give me strength, please!

We’re working on it. Every day. Through a bit of a Chance encounter, we’ve found a wonderful trainer from Smoken Dakota Kennels who just seems to “get” Chance and me. Our neighbor, who has been such a good friend to us, recommended her, and her daughter used this same trainer to help out with a rescued dog. From the first phone call, I knew it was going to be a good fit.

Even before we started obedience, I asked for a private session because once we were back at the folk’s house, Chance started in on his “guarding” behavior again. If you didn’t get a chance to read last month’s post, this guarding is where Chance was launching himself at me, ripping & biting. I was bruised and my clothing ripped and I was, of course, highly concerned. Lydia suggested we “repurpose” the back yard – use it for training only. And keep Chance on a leash.

Chance seems to like the closet (folk’s house – I would never pick that color!)

And that was that! Chance seemed to give up his claim on the yard and forgotten about his “guarding.” No more dancing around fending off the wild dog, which generally seemed to be happening at that first wake up when the pottying was so urgent I’d be outside in my bathrobe with him, in my fuzzy purple slippers, my hair sticking up and in full view of at least a half dozen houses overlooking our backyard.

I shudder to think I might come across Chance and myself on Youtube or Facebook doing this wild dance culminating with me tackling as Chance barked and bit and growled and hissed and yelped and shook around like Linda Blair in The Exorcist. All as I’m wearing my now permanently mud and grass stained, slightly shredded bathrobe, my fuzzy purple slippers long gone and scattered across the yard.

So cross your fingers for us and a say a little prayer, if you’re the praying kind, that we’re done with that. How bad could it be, you might wonder, this little puppy? Well, it was something like this:

There is one more problem that Lydia the trainer can’t help us with – though I never get political on my blog (although my personal facebook is a different matter) I have found that Chance is apparently a member of an opposing political party, yup, and he ate my ballot. Well, shredded it would be more descriptive.

And then there’s obedience class. At 4 1/2 months when we started (delayed so Chance could get through his full set of shots, first) he was the oldest of the puppies. A few were close, and there’s a 3 1/2 month old Great Dane who’s just about Chance’s size. But most of them are cute, little adorable fuzzies with winning personalities. And then there’s Chance.

Chance, he is just such mischief!

Chance, who wiggled and squirmed and barked his little “look at me” and “pay attention to me” bark through most of the first class. And when the trainer told us how to hold the pups to redirect them, then had to turn to me and say, “If you’re pup is too big to hold, sit on the ground with them,” and who reassured me by saying that something to the effect if you’re not hot, sweaty and breathing hard during class, you’re not really working. Boy was I working!

The second class went better, and Chance was one of the two puppies who could do his sit, down, and stay. We demonstrated as jaws dropped – remember they all met Chance at the first class. Chance went through his little performance, and then we ended with a high-five: A beautiful moment as Chance gazed at me and the connection was palpable. I said “High five, Chance,” and he raised his little paw to meet mine then sat back and gazed at me adoringly. A soulful moment. Beautifully choreographed.

And Chance heeled well, at least for him, which is never a given. One time he’ll walk like a dream the next he skitters after every blowing leaf and tosses himself on the ground as if to absorb, by osmosis, the smells emanating from the very earth itself, while at other times he strains so much he sounds like Darth Vader. Dad says, “What’s he saying?” I answer, in a low vibrating voice: “I want, I want, I want…” But by the end of the puppy class, Chance was melting down.

We learned a little hand sanitizer works well when your puppy has turned into a wild Zombie thing, eating you alive as you sit there, hot and sweaty on the suspiciously smelling floor, clothing in disarray, covered in hair and trying to hold 60 pounds of wild, bitey, squirming puppy, nodding and smiling to the onlooking group as if to say, “It’s all right, I got this.”

These things scare Chance AND me!

In other news, with all the fall and Halloween decorations out, I’ve found out that Chance is afraid of all of those Raggedy Ann and Raggedy Andy scarecrow decorations that people seem to love. He shrinks and cringes away, for which I really can’t blame him. I feel much the same way. No offence if you have them…my folk’s do. There’s no accounting for taste. 🙂

Had I only known earlier, though, I could have just carried one around with me in the backyard, brandishing it wildly, much like one of those rotten kids in Lord of the Flies with their pig head on a stick. All while wearing my mud stained, shredded bathrobe, purple slippers and wild hair. Take THAT Chance, I’d say…and THAT as I brandished away!

Getting that towel was a project!

Chance also had his first “real” bath this last week, which he loved. He was all soaped and lathered and rinsed and smelling good, while at the same time, I was all soaped, lathered and smelling, well, like wet dog. And of course, he was running around with the towel when I made an error in judgement. I thought if I could lure him towards me by opening the back door, I’d be able to catch the towel as he zipped by.

I did, of course, overestimate my athletic prowess and underestimate the inestimable Chance.

Homer by the way? Still hates Chance. And this green by the way – painted over now!

Well, it’s more than past time to go to bed. I hope everyone had a great Halloween! But I did forget to update you about Homer. Yes, she still hates Chance. She’s perfectly content to help me blog or find a high perch and yowl at him.

21 thoughts on “A Chance Encounter”