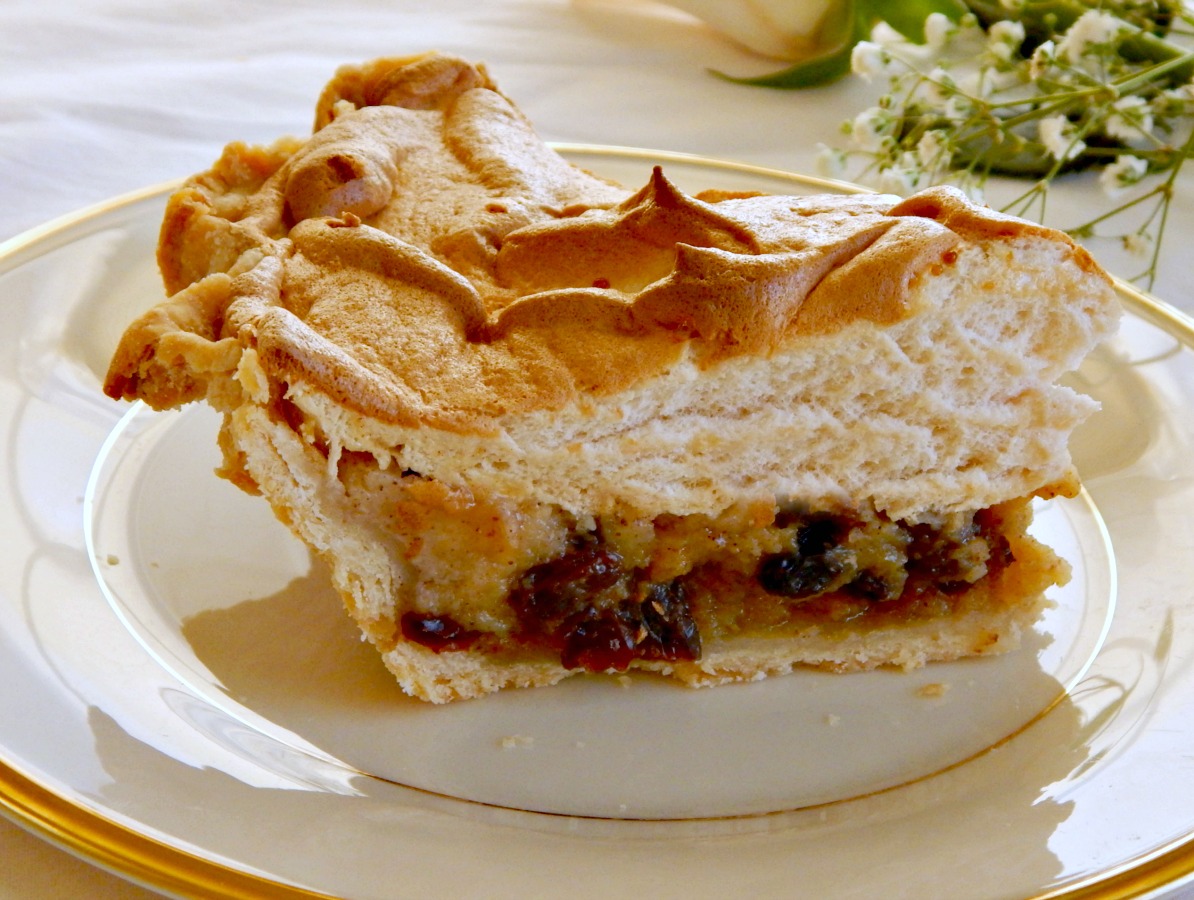 I might have to clarify on this recipe: This is just ONE of my Grandmother’s pie crusts. She was a great baker of pies. People fought over her pies. Seriously. I chose this very old-fashioned crust for my Sour Cream Raisin Pie because I believe both to be from around the same era. It’s delish, a bit like a shortbread and quite a bit different from the recipes I’ve seen or used.

Before we talk about the crust, let me tell you a bit about my Grandma Irene, all four foot eleven of her! She grew up in a tiny town in Iowa, her father was a lifetime engineer for the railroad, and as a youngster, she had long, auburn red curls nearly to her waist.

She was born in 1899 and her lifetime spanned nearly a century – she often shook her head and said, “What will they think of next!” She was “sharp as whip” and graduated from the University of Iowa where she worked her way through as an elevator operator and sent money home. During the great flu epidemic of 1918, she nursed the ill who were piled in the dorms, hallways and buildings of the campus.

As a young woman, she taught in a one room school house (25 miles by train, but she’d make a stop along the way at her home town morning and evening to care for her very ill mother) and never had a discipline issue with the big, hulking farm boys. She was loved (and perhaps a bit feared) by all.

Irene played the piano beautifully, at church and for weddings and it’s said the family would roll up the rug and have people over to dance, something that must have brightened things up on the Iowa prairie. One time, this tiny woman sat down on a piano bench and it cracked in half, tumbling her to the floor, a story she was long teased for which kind of funny since she was so tiny.

And she baked pies. Every year, for Christmas and Thanksgiving, and she’d bake a lot of them, so there would always be extras for the families. In her last years, it became increasingly difficult, and so the announcement came one Christmas that these would probably be the last. Two pies were left, a pumpkin and an apple. The annual bickering ensued between my Dad and Uncle over which family was taking which.

When it was time to go, the pies were nowhere to be found. Each party accused the other. My uncle went so far as to search our car and came up empty handed. As he, my Aunt and the cousins waved us goodbye, we backed down the drive and out to the street and came to a dead stop. Jumping out, my Dad triumphantly grabbed the pies he’d hidden, unbeknownst to everyone, in a snowdrift. There was no way our poor Uncle could catch us as we sped away. What a surprise it was to us all and what a coup for our family!

If my Grandma were here, I think she’d tell you the trick to a good crust is to make them often, use a light hand and a minimum amount of moisture, and keep that dough as cool as you can. Technique, in my hmo, is more important than any recipe – after all, they promise, all these recipes out there, to be the “perfect” crust, don’t they?

So Grandma, this is for you, and I wish I could show you this post!

In a large mixing bowl, combine lard or shortening, flour, and salt. Cut with pastry blender, two knives or fingers until crumbly.

Mix egg and water and toss with a fork until combined. Chill until ready to use.

Note: I used half butter and half crisco, using the 1 1/4 amount total.

You know I’ll be bringing this to our Throwback Thursday #22 Link Party, hosted by Quinn of Dad What’s for Dinner, Meaghan of 4 Sons are Us, Alli of Tornadough, and Moi! That’s right – me! Click over to our Throwback Thursday post for links to their blogs and social media, rules and more info or just click on the blue leapfrog, below, to view all the posts or enter your own!

20 thoughts on “My Grandmother’s Pie Crust”