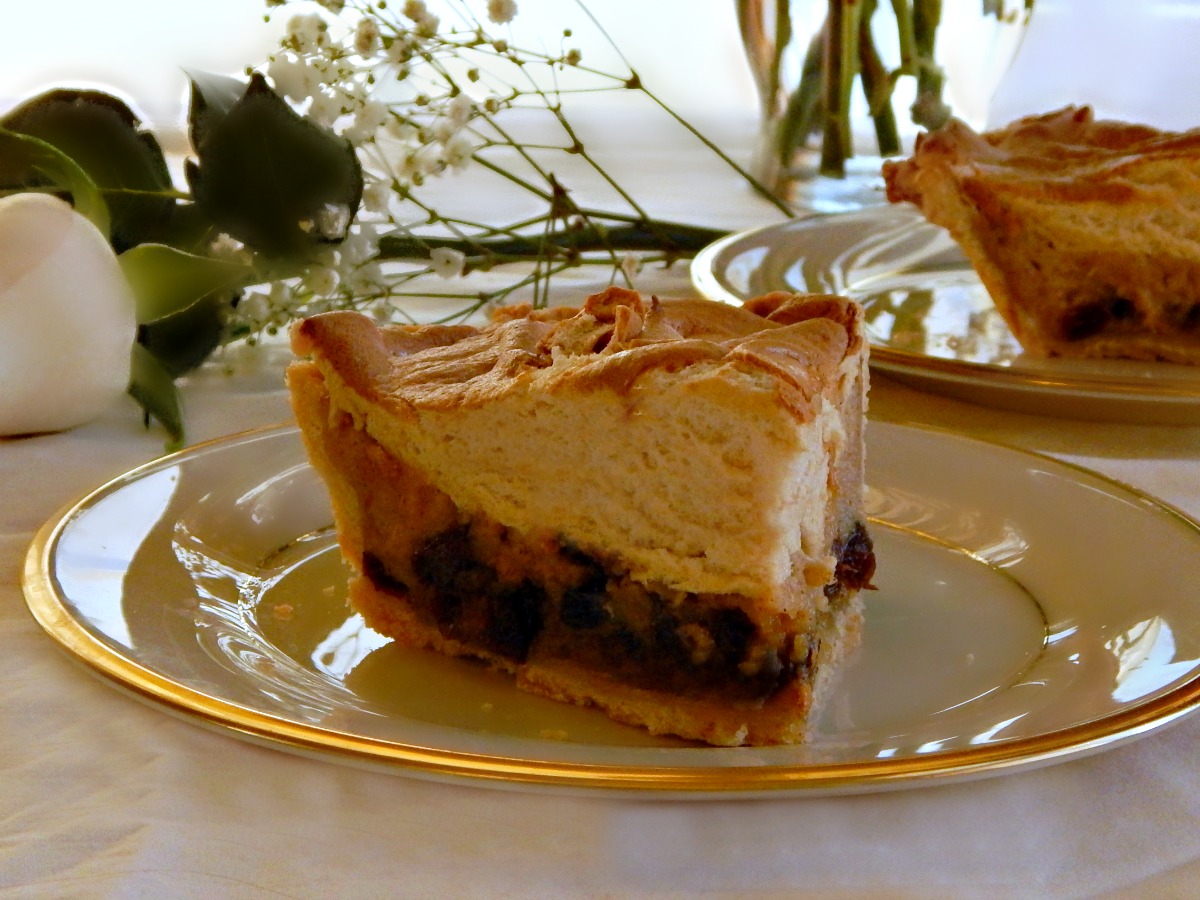 The world of food has changed since the internet! I’m not sure if younger generations realize how prized recipes used to be and what a gift the sharing of a recipe like Sour Cream Raisin Pie was. Now, though, even obscure recipes can be found pretty easily. Sometimes, too many to sort through! 🙂

When I moved from Iowa to Colorado in the late 70’s I missed one of my fave pies: Sour Cream Raisin Pie. Of course, back then I didn’t know it was a regional specialty, popular throughout the Midwest & areas where good, solid, Germans settled. It seemed no-one in Colorado had heard of it, and it was nowhere to be found.

I was thrilled when a friend of my Mom’s gave me her family recipe. It’s about as old-fashioned as they come – she thought about 90 years and she gave it to me about 40 years ago!

The method is mix and bake. Some newer recipes s are cooked stove top first, like an old-fashioned custard and they’re wonderful and creamy, kind of like a coconut or banana cream pie except with raisins, but this, here, this is the real deal Sour Cream Raisin Pie.

I hadn’t thought of it for years until my Dad said he’d love to have some Sour Cream Raisin Pie. My Stepmom pulled a face – I know, I know – it sounds strange if you’re not familiar with it! But after a few bites, she proclaimed it the “Best Pie I’ve ever eaten!” I’ll take that, thank you!

I added a brown sugar meringue topping but in the Midwest most Sour Cream Raisin Pies that you get at a diner have a billowy white meringue and when I was growing up most home-baked ones didn’t have meringue at all. Maybe ’cause meringue used to be pretty tricky in the old days without great ovens, electric mixers, and air conditioning. If you want a white meringue, try the one on  Cook’s Illustrated Lemon Meringue Pie – just because it is the best Meringue, evah!!

I also just “had” to pair this with a very old pie crust recipe of my Grandmother’s that I think was from about the same era – I just thought it fitting. How old, you might ask? Old enough that the original recipe called for “rendered lard”. It’s quite different from the crusts I’ve made before.

Do use a standard, not a deep dish, for this pie, and it will work out perfectly. You’ll want the shorter old-fashioned “pie plate.”

Preheat oven to 375 degrees. Arrange pie crust in a regular sized, not a deep dish, pie plate and flute as desired. Set aside.

In order, in a large bowl, add all pie ingredients in order except raisins and mix until smooth. Stir in raisins. Pour filling into crust.

Bake in the lower half of the oven until filling is set, about 40 minutes. Allow to cool to room temperature before serving.

If using meringue, add as soon as the filling is firm in the center and bake about 15 – 20 minutes until golden brown. This brown sugar meringue may raise alarmingly and then fall a bit, but that is to be expected.

In a small pan, add the tablespoon of cornstarch, then whisk in 1/3 cup water. Bring to a bare simmer in small saucepan and cook, whisking occasionally, until it just becomes thickened and translucent looking, 1 to 2 minutes at most. Remove from heat and let cool slightly to barely or lukewarm while the eggs are being whisked. It’s helpful to transfer to a small cup as it may continue to cook and harden in the hot pan and be difficult to incorporate into the meringue.

If using stand mixer, fit it with the whisk, and beat egg whites and vanilla at medium low-speed until foamy and frothy. Mix together the cream of tartar and sugar, turn the speed up to medium high and add, a tablespoon at a time until incorporated (it won’t feel grainy when you run a bit between your fingers) and the mixture forms soft, billowy mounds. Continue to whip and add the cornstarch mixture, about a tablespoon at a time. Continue to beat until stiff, glossy peaks form, about two to three minutes longer.

Working quickly, dollop meringue in small mounds across the hot pie filling. Using rubber spatula, immediately distribute meringue evenly around edge and then center of pie, attaching meringue to pie crust to prevent shrinking. Top off with any remaining meringue. Using the back of spoon, create attractive swirls and peaks in the meringue. (I personally like to use the spoon to make small “scallops” with only a very few peaks which prevents the peaks from over baking before the rest is nicely browned.) Make sure the meringue is “sealed” to the crust with no gaps. Bake until meringue is light golden brown, about 20 minutes.

For more details and photos of the Meringue, see my Lemon Meringue Pie recipe.

You know I’ll be bringing this to our Throwback Thursday #22 Link Party, hosted by Quinn of Dad What’s for Dinner, Meaghan of 4 Sons are Us, Alli of Tornadough, and Moi! That’s right – me! Click over to our Throwback Thursday post for links to their blogs and social media, rules and more info or just click on the blue leapfrog, below, to view all the posts or enter your own!