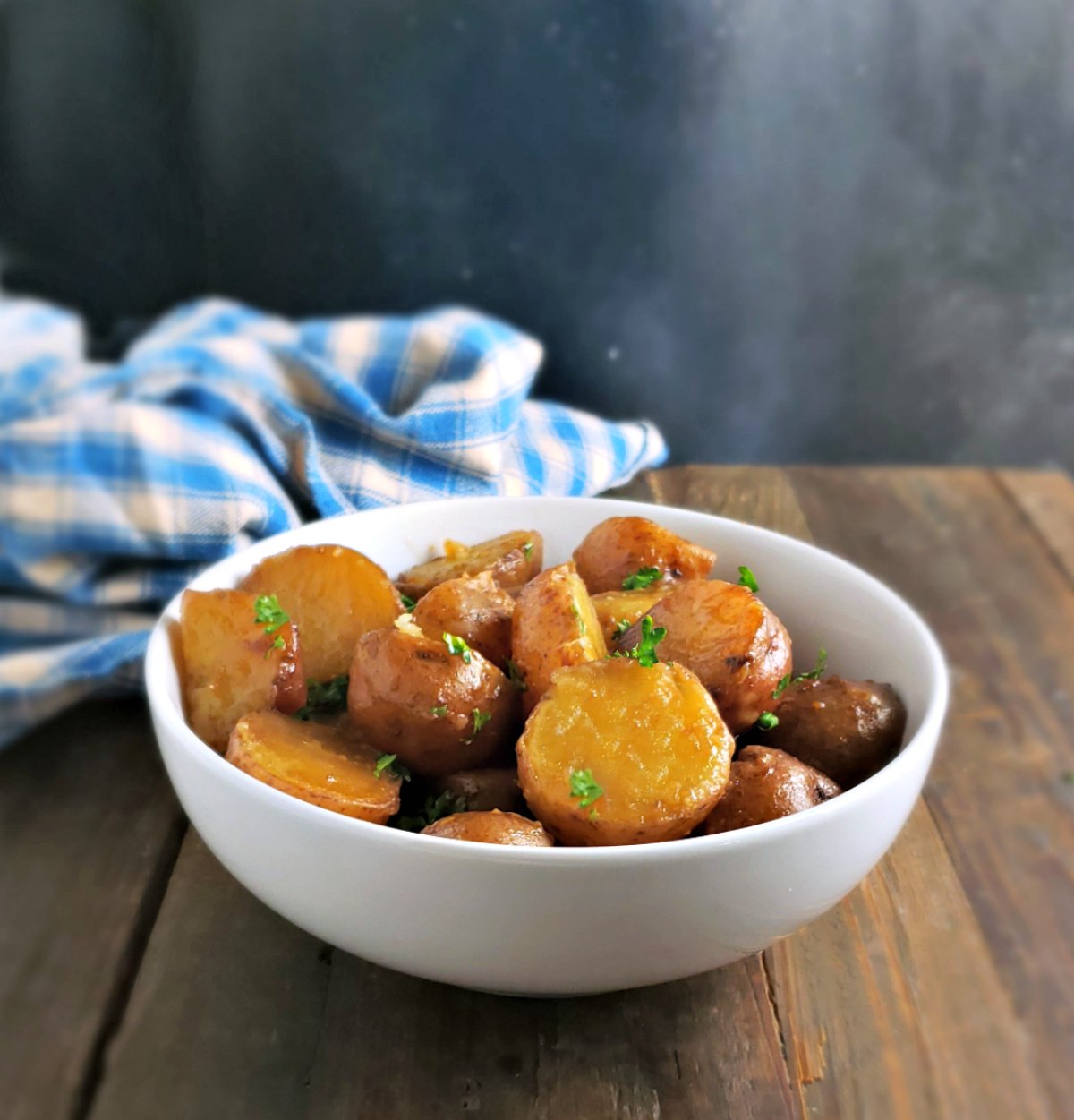 Sometimes I feel a little sorry for the kids of today. There are all kinds of food that are really simple wonders and in the past used to be so prized when they came into season. Savored in all their glory for the short time they were available. Baby Potatoes (in the past called New Potatoes) are one of those items, and I can’t think of a way that highlights them more (other than just a touch of butter and a sprinkle of salt) than my Mom’s method of making Baby Potatoes in Parsley Broth.

This really is a “method” more than an absolute exact recipe, and one you’ll want to just feel your way through. The ingredients are so basic, the potatoes, the broth (the best you can get or make), a little salt, and a good pat of butter. It’s the method that makes them outstanding!

About Baby Potatoes in Parsley Broth:

This method works so well with any baby potato and red and Yukon gold are particularly delish. You’ll start out with cooking the halved potatoes (my Mom used to remove a strip of peel from each potato and so did I until at some point I just started cutting them in half, instead) in broth. As the potatoes cook, some of the starches from the potatoes leach into that broth, giving it a little body and the broth reduces.

By the time the potatoes are perfectly tender, they’re colored with the flavor they’ve absorbed and the lovely broth has reduced to almost a glaze. You’ll turn off the heat, add the butter and let it slowly melt. A sprinkle of salt, if needed and a small rain of parsley and they’re truly perfection, a small wonder that takes nothing to make.

Now, I’ve pretty much given you the whole recipe, right there, but I mentioned a “feeling your way through it” part. There are always a few variables to this recipe; it’s not an exact science because the potatoes you use will always pretty much vary in size and the size of your pan might vary, too, and both affect the timing. Try to pick out ones that are consistent or cut the larger ones to roughly match the smaller.

When the butter’s added, the glaze becomes shiny and gorgeous. That’s when you’ll see if it needs just a bit of salt and add the parsley. Sometimes parsley seems like an afterthought, a garnish, but in this case, the freshness, the slight bitterness, serves to give a bit of contrast to the richness of the potatoes.

If the potatoes are sitting for a bit and seem like they are absorbing up every bit of that glaze, add just a touch of water, teaspoonful by teaspoonful or a little more butter. By the way, I almost always make this recipe with beef broth, because that’s how Mom made it. I’ve made it with my homemade Chicken or Turkey Stock, too, though and it’s outstanding as well. A good vegetable stock, if you prefer will be delish, too.

Baby Potatoes in Parsley Broth – An old photo, this one with chicken stock.

Back in the day, you’d find the best prices, and probably the only time baby or new potatoes were available was at the end of summer, beginning of fall. These days you’ll find them all year round. Watch the sales to bring them in on a budget.

It’s always going to be a fraction of the cost to make chicken broth as opposed to buying it, but beef broth can be a different story. Bones are in high demand and often go to everything from restaurants to making dog bones!

If you buy broth, you are going to find it at absolutely the lowest prices before Thanksgiving and Christmas (the Winter Holidays) and prices close to it before Easter. Those holiday sale prices are usually going to be less than any broth/stock you’ll find at Aldi or at your buyer’s club. Stock up if you can, to last from one holiday to the next. If you’d like to see what else might be on sale during any particular holiday, see my post, Win the Grocer’s, and click on the appropriate holiday.

Either remove a strip of the peel around the center of each potato or cut the potatoes in half. Place in a saucepan. Nearly cover with the broth of your choice. Bring to a boil, add a lid and turn down to a good simmer. Cook for 15 to 20 minutes, until potatoes are just tender.

Remove lid and continue to simmer until potatoes are soft and broth is reduced, turning the potatoes from top to bottom now and then. Once tender, tender, the broth should have reduced to almost a glaze. Remove from heat, add butter and parsley, toss and place potatoes in serving dish. Sprinkle with salt, if desired.

Note: These potatoes are literally cooked in broth, so it won’t ever be thick like a “gravy” but should end up like a “glaze.”

I’m sharing these potatoes to Fiesta Friday 90 put on by Angie of the Novice Gardener. The hosts this week are Effie @ Food Daydreaming and Lindy @ Lindy Mechefske. as well as at Throwdown Thursday, with Quinn of Dad What’s 4 Dinner and  Alli from Tornadough.