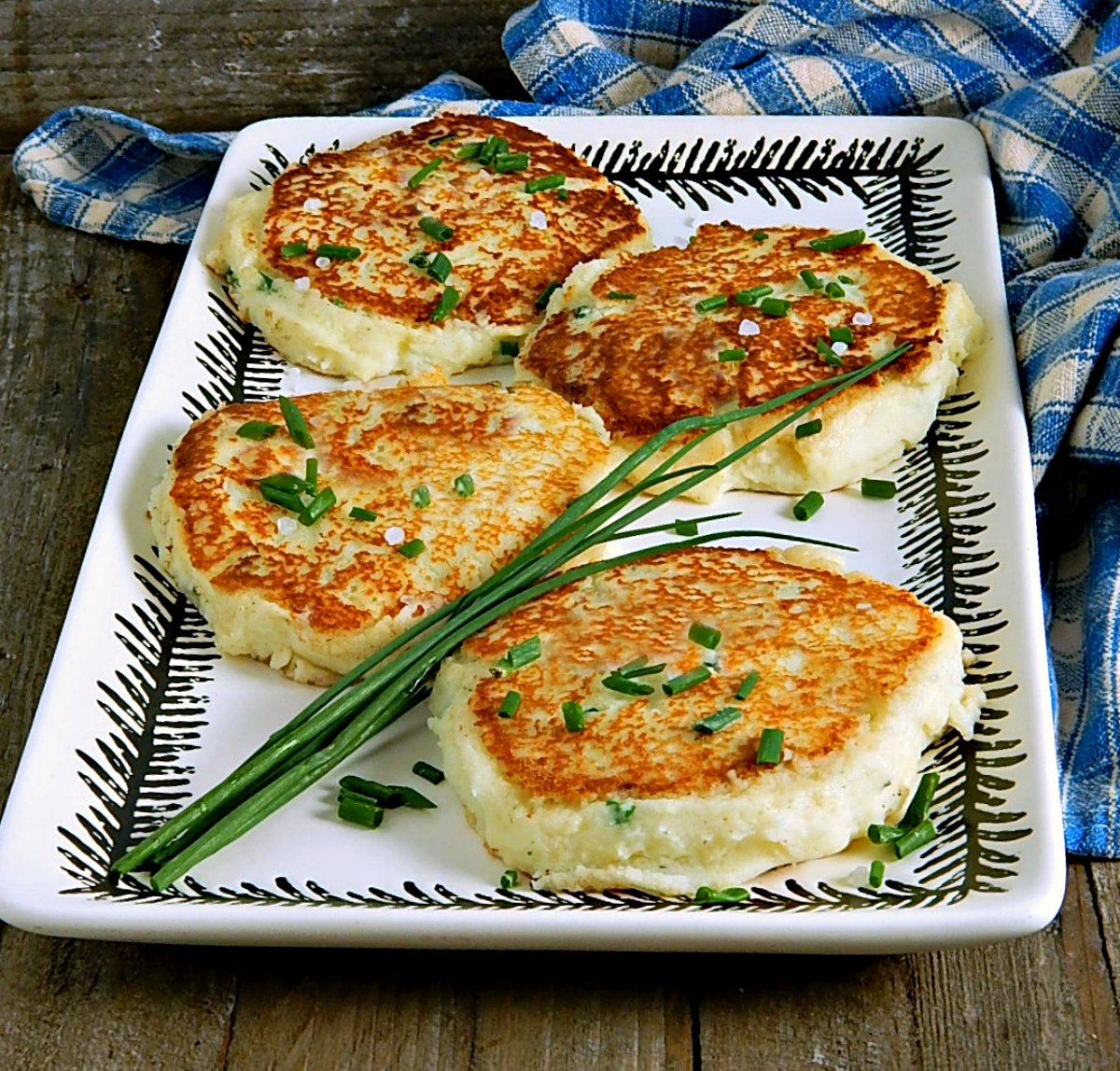 Potato Cakes – are they Irish? I grew up with them (my Mom was Catherine, my Grandma Irene, my Great Grandma was Lizzie and I’m a Mollie) but I suspect even cooks that weren’t Irish made these beautiful little cakes when they had leftover mashed potatoes. What I do know is they’re delicious, maybe even better than the original mashed potatoes they are made from. And for me, that’s sayin’ a lot coz I do love love love me some mashed potatoes!

So these are the Traditional Irish Potato Cakes that are whipped up from any leftover mashed potatoes, not “Boxty” which are more like a pancake and made with both grated and mashed potatoes and originally hail from just a few counties in the North Midlands of Ireland, according to Wikipedia. And while Boxty has been gaining in popularity and the recipe is spreading, these are more of an example of the frugality of home cooks as a way to refashion leftover mashed potatoes into something fabulous.

So what you have here a way to take your old, cold leftover mashed potatoes, any kind you have, creamy, chunky, cheesy, maybe even mashed potatoes that you might have thought weren’t even worth wrapping up and saving, into something utterly glorious. No leftovers? No problem. There are instructions to make from cold or leftover boiled potatoes, too, in the recipe, below.

These have a delicate, lacy buttery browned crust that has a very appealing, slight crispiness. And once you cut into that beautifully browned potato cake, you’re going to reveal the hot creamy mashed potatoes in the center. When I was a kid I loved to “lift” that crispy crust off the top of the potato cakes and only after I’d eaten that would I dig into the rest of the mashed potatoes left behind.

And of course, when I was a kid, we didn’t have a sprinkling of sea salt over the top of our Traditional Irish Potato Cakes or a few chives, but heck, why not do it? And we certainly didn’t have any “add-ins” to our Traditional Irish Potato Cakes, but again, why not? I put a few suggestions in the recipe, below, or maybe you’ll be inspired by something you have hanging out in the fridge. I’ve been thinking about a spoonful or two of my Bourbon Bacon Jam mixed in but haven’t taken the plunge – yet!

So likely as not, you’ll have to give up the idea of a “recipe” that produces the “perfect” potato cake each and every time. You’ll have to tap into the inner cook and feel your way through this recipe and appreciate each batch of potato cakes as having its own personality. So I can get you close…very close…the rest is up to you!

Keep in mind that sometimes your Traditional Irish Potato Cakes will hold together well, other times they might need gentle care, some will be a bit stiffer and some might flop and ooze a bit as they are turned. All of them are going to be gorgeous with their slightly crispy exterior and creamy center and all will taste fantastic.

If you are starting from scratch and making mashed potatoes just to make potato cakes (I’m sure that move would have puzzled my Mom and Grandma; this was a go to leftover recipe for them, but I’ve done it! Usually though, I actually make extra mashed potatoes just so we can have these) you have a little more control over what goes into them. I’d advise making them tasty but without too many “add-ins” and more towards the thicker side of the mashed potato spectrum; if you add cheese or anything else that will get melty or oozy when heated, go light on it.

You just can’t get any more frugal than taking an ingredient, like leftover mashed potatoes, that could be a potential waste and turning it out for another meal. This recipe runs about $1.10 to make, but that’s counting all the ingredients in the mashed potatoes as well as the butter, egg, flour, etc. in this recipe. Those items run about 25 cents if you.ve started out somewhat conservatively.

When ready to cook, preheat a large skillet over medium heat, add butter and melt.

Using clean hands, mix mashed potatoes, egg, and enough flour to form a “batter” that is quite thick, not creamy, and “mounds.” Add salt and pepper to taste and any optional ingredients as desired.

Mix right before frying and keep the potato mixture cold; by the time the outside is nicely browned and crunchy, the inside should be heated through and there is less chance they’ll become too “oozy” by the time they are done when you start with cold ingredients.

To cook, pick up about a quarter of the batter in one hand and form into a patty, much like a burger patty is formed.  Place it into one palm and press and turn into a uniform, round, flat shape.

Add to the hot pan; brown very slowly in the hot butter, turning once. Best if eaten at once.