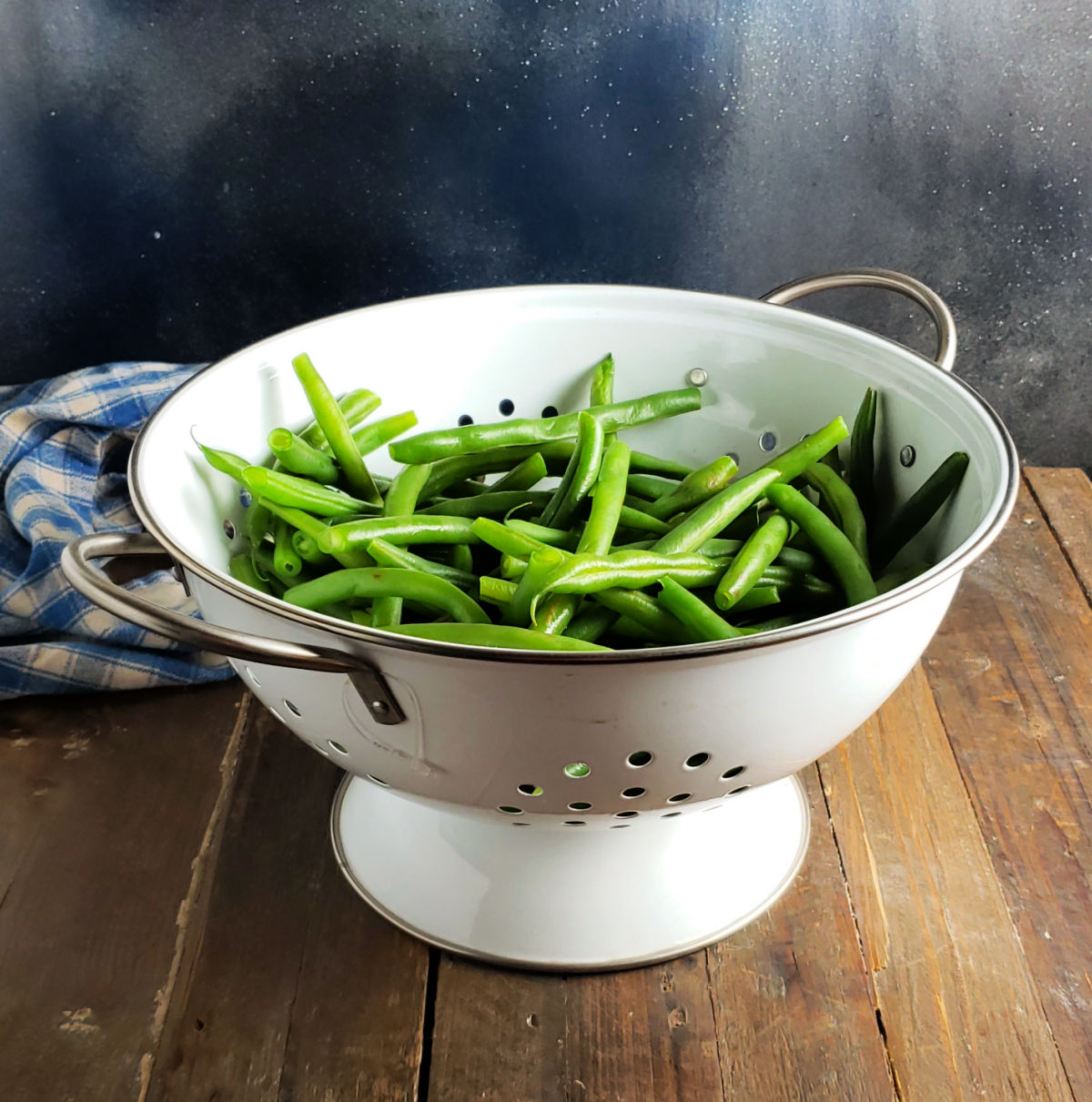 One of the best vegetables to freeze, as far as quality when it comes out of the freezer, is beans and I love Blanching & Freezing Beans. It doesn’t matter what kind: green beans, snap beans, or wax beans. It’s also super simple to grow beans, but that’s a whole ‘nuther thing, so no worries if you don’t grow your own. You can easily use beans from the farmer’s market or the grocery store or wherever you normally get your fresh green (or other) beans from.

Blanching & Freezing Beans – Mine are not ready yet, but soon!

As a matter of fact, Blanching on its own and then refrigerating (to extend the fridge time for a bit) or Blanching & Freezing Beans (for longer-term freezer storage) is a great way to preserve your green beans, no matter where you’ve gotten them, anytime you have extra. (I will show more photos as soon as my beans are in this year!!)

About the Beans & Why to Blanch:

If you’re a huge fan of this veggie like I am, you know when you buy them they can go super fast from beautiful and ready to use to ugly and ready to toss, sometimes in a day or two and certainly in just a few days.

There are two factors at play here. The first is enzymatic action, but more on that, below. The second is “rust” which you might recognize as small rusty-colored blotches on your beans. Blanching will cause both the enzymatic action and rust to stop right in its tracks.

I seem to have a bit of fungus on my beans! I am trying to treat it organically.

Rust is generally caused by a fungus and can be very common on bean plants and the beans themselves. Rust comes in 31 different varieties and it is not uncommon to see a few spots here and there; they can be cut away and overlooked and won’t harm you.

The problem multiplies in the humidity of your fridge and can multiply quickly. While rust itself is considered pretty harmless, it can open the way for other pathogens, and beans that have a lot of rust will certainly be unattractive enough that you won’t want to eat them.

A quick blanch, done properly, will kill this particular fungus, which means you can basically buy time to use those beans in a few days. Without blanching, your choices when faced with a few spots of rust are to cook immediately or to toss in a few days as the disease progresses. (The photo of the rust on beans was submitted to Ask Extension.)

All vegetables and many other plants (and animal products) have proteins present called enzymes. Their job is to ripen and mature your food. Even after your vegetable is picked, those enzymes work heroically, turning green tomatoes into red, turning avocados from hard to soft, and so on. And yet still they continue after food has ripened – until the food has unattractive textural and color changes.

Unfortunately, enzymes are still at work at freezer temperatures. That is why Green Beans (and any other beans, along with all kinds of vegetables, fruit, and other food) that aren’t treated, with enough time, will not be so attractive when they come out of the freezer.

Two things are commonly used when freezing to stop enzymatic action. The first is citric acid (some use Vitamin C), a common food additive, which isn’t recommended for green beans, and the other is blanching. Blanching can be done by steaming, boiling, or in the microwave and has the added benefit of destroying some of the micro-organisms that might be present. The preferred method for green beans is to blanch in boiling water (water blanch.)

These are freshly blanched, ready to freeze or toss in fridge to cook later

Spoilage organisms can be present on your green beans as they grow or introduced along their travels to get to you. And of course, you can introduce them yourself once in your home. (See cleanliness, below.)

Freezing won’t destroy bacteria or organisms like Clostridium botulinum or E Coli or any other; for the most part, it just holds them in a kind of suspended animation. What goes in the freezer comes out, the bad with the good, and once beans warm up as they thaw, so do all bacteria and other organisms, to do what they do best: multiply.

Your freezer should be set at 0 degrees or below for best safety and food preservation. It can be a  difficult temperature to maintain with a refrigerator/freezer combination, especially if the door is opened often; keep a closer eye on those types of freezers and the food in them.

There are two big danger zones to be aware of when those nasties can multiply quickly:

Thawing is one of the most worrisome. While it might seem as if there’s little danger of thawing vegetables outside of the refrigerator, especially if the package feels cold, the outside surfaces can warm faster and bacteria can begin to reproduce there. Thaw in the refrigerator or use from the frozen state.

First of all make sure your green beans are fresh, sound, and undamaged. Rinse them well under running water, and place them in a colander to drain. It’s a good idea to not use your sink for food items; even if you think it is pristinely clean, it’s not!

Make sure your work surfaces, any cutting boards, knives, and your hands are well washed and clean. Counters are often not as clean as they seem. There’s really no need to go through heroics and lots of products to clean your counters but do wash with a clean rag (sponges are one of the worst offenders as far as carrying bacteria and it’s a health code violation to use them in restaurants) and soapy water and thoroughly dry.

The easiest way I’ve found to actually trim the beans is to lay them out in a row in bunches, nudge them with your knife until one side of the bunch is even, and cut across. Then take the other side of the bunch and do the same. You really only need to cut (or pinch) the stem/blossom end, not the long pointy end, but it takes a lot of time to sort the beans that way! I just cut both ends.

At this point, you can leave your beans whole or cut them into any size length you desire. Try to cut uniformly so all your beans will cook at the same rate, later. If you are blanching to toss them into the fridge, rather than to freeze, I would recommend leaving the beans whole.

Blanching is quickly cooking in boiling water, steam, or microwave and stopping that steaming process by plunging into cold (under 60 degree F.) or ice-cold water. Blanching is essential to preserve the quality of any vegetable frozen for more than a brief period of time in the freezer.

Once blanched, you’ll want to drain to remove as much water as possible. If you are super picky, you might want to roll in a clean kitchen towel to remove most of the moisture.

Now they are ready to either freeze for the long term or toss into a container in the fridge to use within the next few days.

Preserving the Texture of Beans in The Freezer:

All freezing causes some textural changes. The simple act of freezing will rupture some cell walls and freezing for too long can cause further damage through changes in humidity. Freeze for long enough and vegetables can dry out while being covered in frost. Freeze even longer and you risk freezer burn.

Luckily, beans freeze beautifully after blanching. Do package in a heavy Ziploc or another container. If desired, you can freeze the beans on a sheet tray, and once frozen, gather them together and package.

Your beans will last in a freezer for six months to a year before they lose quality; in a fridge freezer, expect six months, in a deep freezer the longer time period is more realistic. For optimum quality, use sooner rather than later!

To Cook with Blanched Beans:

Whether you blanch to keep in the fridge a little longer or to freeze for the long term, remember, your beans are already partially cooked.

Reduce your cooking time a little bit to compensate if you are not using them in a frozen state.

There are pots called Blanchers that come with a wire mesh basket and cover, and if you regularly prepare items for the freezer it can be nice to have. If you have a setup like a large pot with a pasta strainer, it will work well. So will any large metal strainer with enough room to hold the beans that will fit into a large pot with a lid.

At the very least you can do like I do. Just boil the beans directly in the pot and empty the pot, beans, and all into a large strainer set over another large pot in the sink.

Well, this sums up just about everything I know about Blanching & Freezing Green Beans! I think you’ll find this method beats out any store-bought frozen beans in taste and quality – and it’s so worth spending a little time doing this project. Cross your fingers for me on my beans! I want to post my hot dillys this year!!

Ready to store or freeze.

This is a preferred method for many home cooks.

Bring water up to a vigorous boil and lower beans into water. Add lid. The water should begin boiling again within 1 minute (if not, there are too many beans for the amount of water.) Time for three minutes as soon as the water returns to a boil.

Immediately plunge into cold or ice water when time is up, strain to remove excess water; spread the beans out on a clean kitchen towel.

Keeps well for six to 12 months in the freezer. Longer freezing is not a safety issue but may affect quality.

Note: When preparing beans, remove the stem (or both ends) chop into desired size if desired.