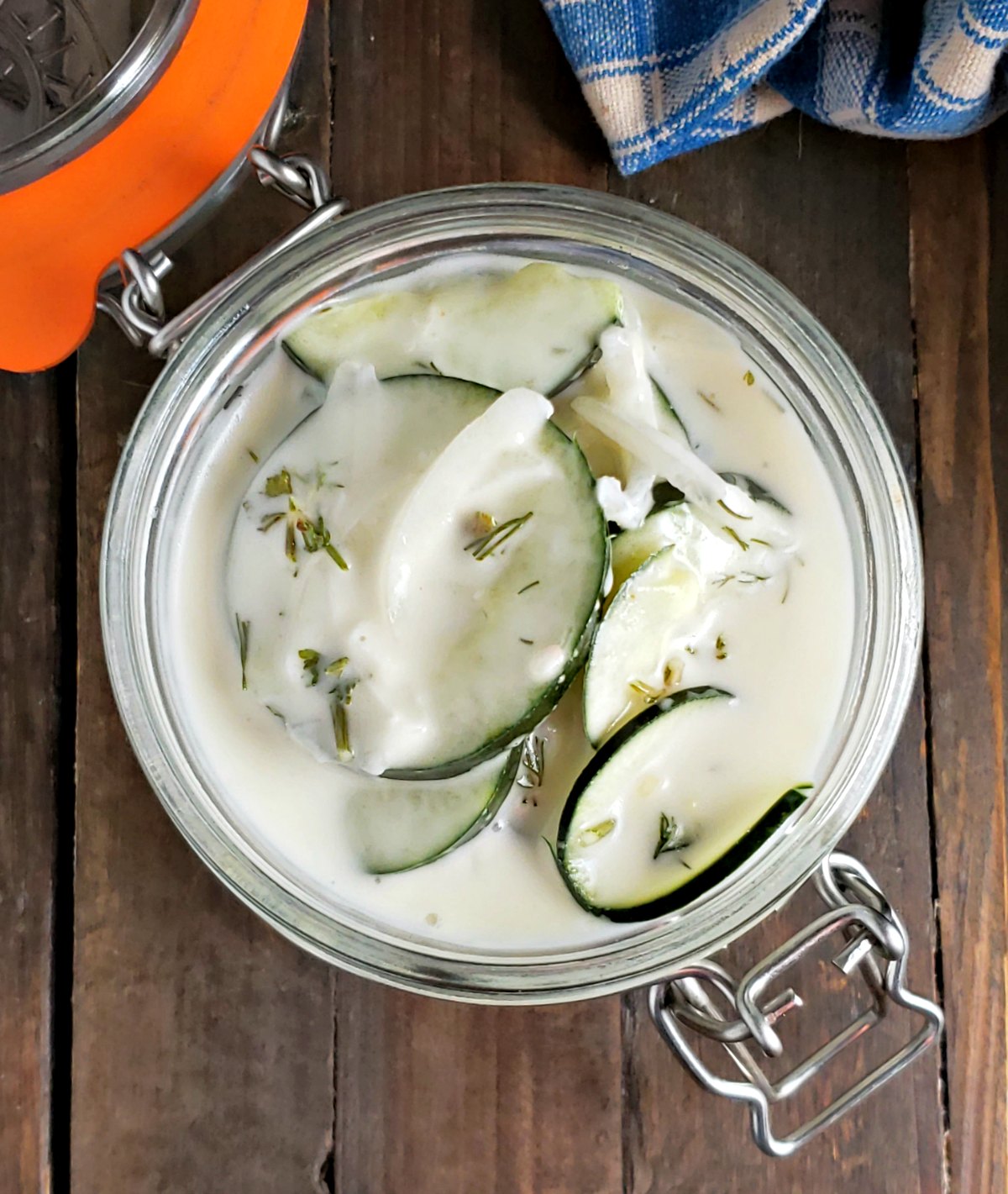 I thought maybe I’d toss out a “Grandma” recipe for you. One that’s perfect for summer especially if you have cucumbers coming in from your garden or constantly on sale at the store. Cucumber Sour Cream Salad is also so refreshing on a hot day and it’s just one of those little side dishes that are nice to have in the fridge.

I always like making these old school cucumbers for a supper side and then pulling them out for lunch the next day or two. They’ll fill out a quick meal without much effort. And they always remind me of home, of growing up in a small Iowa town where people just tossed these cucumbers together. And while I tend to think of this recipe as German, you’ll find that this is pretty ubiquitous…you’ll find variations of this same recipe that span many different heritages.

When I speak of tossing the recipe together, I mean that this is one of those recipes that most people I know don’t use an actual formal recipe for. They mix together the basic ingredients and go by taste. But the few ingredients are almost always the same, maybe a small variation here or there; it’s the proportions that can vary a bit.

There are cucumbers of course, in this recipe and sour cream (although some people use cream) and usually, but not always onion. That can be yellow or white or red onion and sweet onion is particularly nice. Then you really get into personal taste when you decide just how much sugar and vinegar goes into the recipe and if you’d like to use dill or not and/or a good amount of black pepper or just a touch or none at all.

Every now and then I go wild and add a few chives but that’s about as crazy as I get. At least when you’re talking about this recipe! I won’t’ tell you about the time I….

There are two ways to make Cucumbers in Sour Cream, a long way and a short way. Either is just fine. You can just mix the ingredients together, set it aside for an hour or two in the fridge (or longer) if possible, and serve it. The dish will start out pretty thick but become much soupier with time as the cucumbers give up moisture.

Or you can salt, rinse and drain your cucumbers to remove some of that moisture and then make the salad. You’ll just cut the cucumbers and layer them in a colander, sprinkle each layer with a little salt and set it aside to drain for about an hour. Then rinse the cucumbers and let them drain for a few more minutes. That’s going to draw a lot of moisture out of the cucumbers and result in a dish that’s thicker and not as soupy and one that stays thicker over time. Even this will succumb to soupiness if it sits long enough.

Usually, our sour cream is a lot thicker than it used to be, so salting and draining isn’t as critical as it was in the past. It’s up to you. I make it both ways. If I have time and feel like fussing a bit or if I’m making this for company or taking it somewhere, I tend to salt. If I’m just making it for home spur of the moment, I might not. If you process your cucumbers with the salt, don’t add any salt to the recipe though.

As far a the cucumbers, I do want to mention that often they are covered with a waxy substance when you buy them at the store; it helps them last longer. I’ll peel them if they are (or you can scrub them really well) but if not I might peel them or might not. Sometimes I’ll just peel strips off the long the long way so I end up with stripes of peel. It looks a little fancier that way.

Sour cream can be pretty pricey; it goes on sale regularly, especially before holidays. It has a long shelf life unopened but once opened, make sure the seal is tight and store it upside down. There won’t be as much air displacement, it won’t get dry around the edges and will stay fresh longer. When you use sour cream, keep it covered, even if it’s just loosely covered between “dips” and use a clean utensil and you’ll be introducing less contamination and it will last much longer. If your sour cream ever separates and looks watery when you open it, just stir it back together.

During the peak of the season, cucumbers are on sale about every other week for about 50 cents each. Aldi is also a great place to find them for very little and of course, your farmer’s market will have them. They keep several weeks, so buy them on sale and use them up – the waxy skin on the outside should be scrubbed well if you plan on eating it.

Vinegar is almost always at a low for the year before Easter; watch for it and check this post, Easter & Lent, Leveraging the Savings. And not just plain old vinegar is at a low. Check down the aisle and see if the “fancier” vinegar is on sale, too. Stock up for the year. If you miss Easter, do try to stock up during the summer sales when condiments are often on sale. You can see a link to just about every big food holiday and what you can expect to find on sale on my post, Win at the Grocers.

I had two amazing things happen this week and both gave me pause. The first has been watching the comet NEOWISE. Take a peek at it. Bring your kids out with you if the timing works. Drive somewhere if you need to. And just watch a little miracle. Small miracles are there…we just need to give them equal time.

The second was appreciating the kindness of strangers. A young man volunteered his time to clear weeds and brush along the side of my property that butts onto city land. I cannot express how grateful I am…it was a losing battle for me trying to stem the city’s encroaching weeds and it’s like a general stepped in and won the day! There’s so much ugliness rearing its head these days but everyday heroes are everywhere!

If cucumbers are waxed, they should be peeled first.

In a colander, layer the cucumber slices, sprinkling each layer with a little salt. Mix all together with clean hands and allow to drain for one hour. Rinse well, and set aside to drain while preparing the dressing.

For the dressing, whisk together the sour cream, vinegar, sugar and black pepper. Add dill if using. Adjust ingredients to taste. In a bowl mix cucumber slices, onions, and dressing. Allow to sit in the fridge for at least an hour, 4 is better and even longer is better than that, if possible.

If not salting the cucumbers, add a little salt to the dressing.