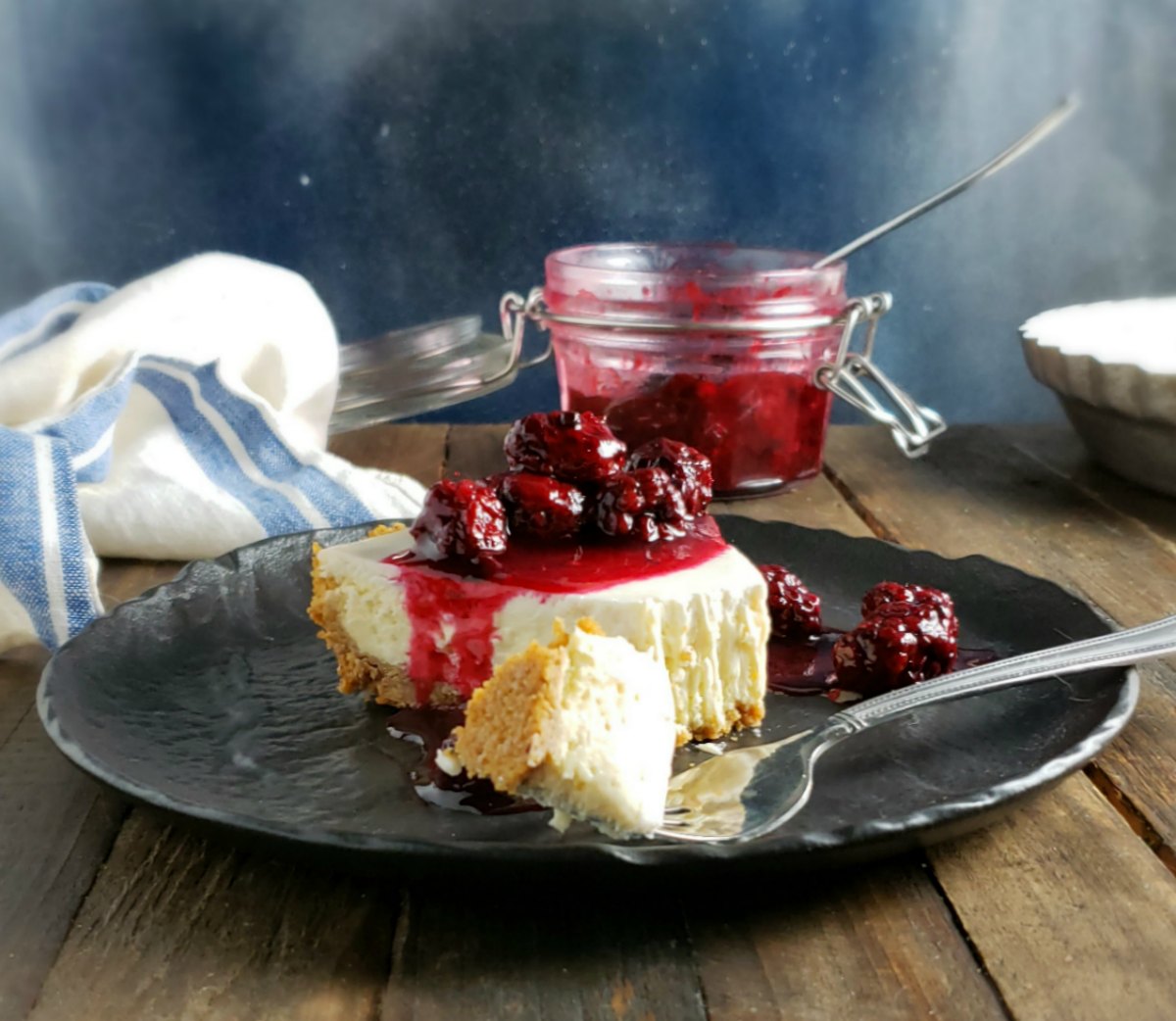 There are sometimes you just want a nice dessert for the family, something classic and not too over the top. That’s when I think about this Old School Cheesecake Pie. While it might lack some of the show-stopping looks of a big springform pan cheesecake, it has all the flavor of the classic cheesecake. It’s just smaller; it’s just enough!

I was first introduced to this cheesecake pie way back in the late 70s by my late Uncle George, who made it for my Mom, my Aunt and me. Now, that was a shocker because I wasn’t aware that Uncle George ever baked. At all! This was at a time when usually the only cheesecake you got (at least in the areas I had lived in) was in an Italian restaurant and they were usually thick and dense and *almost* hard to eat.

This creamy little cheesecake is anything but. It’s super creamy and it has that little sour cream topping, and as you can see, is baked in a pie pan. Which is probably why it’s called “cheesecake pie.” I’m guessing whoever came up with the recipe didn’t have quite the guts to call it cheesecake!

Because this is a smaller cheesecake, it’s just perfect for a family dinner, and because it’s smaller, it’s pretty fast and easy to make. Like most cheesecake, there’s still going to be a good amount of chill time before it’s ready, so allow for that.

Like any cheesecake, start with room temperature ingredients if possible. In a pinch, the cream cheese can be very gently warmed in the microwave for a few seconds at a time.

With only two blocks of cream cheese, there’s no need to use the big mixer; a handheld is perfect. Just mix the cream cheese and sugar until smooth, add in the eggs one at a time, mixing until just incorporated. You never want to over-mix a cheesecake! Turn your mixer down to low and add in the vanilla and lemon zest. Easy peasy.

Bake your cheesecake only until it’s still wobbly in the very center. It will bake a bit more after a topping of sour cream, sugar, and vanilla is added. These days, that topping might need a little extra fussing. With our thicker sour creams, it might not be spreadable after it’s mixed, and you need it to be thick but just barely pourable – thick enough so it will probably need a nudge from the spatula but thin enough to then slowly pour out. If it’s too thick, gently stir in, tablespoon by tablespoon, a little milk.

One of the nice things about this recipe is that no special equipment is needed other than a pie pan and a mixer. No Springform pan and no water bath required. That makes it a cheesecake that’s easy to make even in kitchens that aren’t fully equipped. The key to this recipe is to trust that the cheesecake is ready to pull out and add the topping to when it’s still a bit jiggly in the center! If you do, it will be absolutely soft and luscious.

I think the recipe was intended to use box graham cracker crumbs. If you make your own crumbs, the amount (by weight) can vary; test the crust by giving a bit a little squeeze after you’ve mixed the ingredients. They shouldn’t be wet and should hold together.

You can refrigerate the crust to solidify it or bake it. While baking is optional and an extra step, I think it makes a better crust and it holds up better if there is any leftover. A baked crust just stays crisper; while the unbaked crust is fine the first day, it tends to be not as attractive the second day.

Cream cheese is an item you’ll want to know the regular price, sales price & great sales price – and stock up at the low. It keeps weeks past it’s “buy by” date. It’s almost always on sale during every holiday (see my post on Winning at the Grocer; there’s a link for every major holiday that discusses the best sale items to watch for and purchase.) Aldi and your buyer’s club always have great prices but don’t approach a good holiday sale price at your grocery. Name brand with coupons may be a better deal, although w/o coupons, store brands are a good bet. Our American Neufchâtel is almost always less than cream cheese and is often substituted in cheesecake; I used it in this one.  Want to know the difference? Check out this article by Cheesecake.com, What Cheese Goes In Your Favorite Cheesecake.

Sour cream is another great holiday sales item although it goes on sale regularly. It has a long shelf life unopened but once opened, make sure the seal is tight and store it upside down. There won’t be as much air displacement, it won’t get dry around the edges and will stay fresh longer. When you use sour cream, keep it covered, even if it’s just loosely covered between “dips” and use a clean utensil; you’ll be introducing less contamination and it will last much longer. If your sour cream ever separates and looks watery when you open it, just stir it back together. Be aware that some sour cream now uses gelatin or other thickeners. They may get watery after stirring.

Graham cracker crumbs are a strange thing to shop for. Either a box of crumbs or a box of graham crackers is usually less than half the price of the name brand. Comparisons between the crackers and crumbs are easy: divide the ounces by the price and multiply by 16 and you’ll get a “per pound” price. This week, name brand Graham crackers were $4.39, store brand $1.99, both 14.4 ounces. Crumbs were $3.59 for name brand, $2.59 for store brand, both 13.5 ounces. Obviously, no calculator needed, your best pricing is buying the store brand graham crackers and crushing them. Downside: It’s easy to snack on crackers than crumbs, negating your savings. Great sales and coupons on name-brand crackers, if you’re a savvy shopper, might be the better deal; Graham crackers are often included at a sale price in buy so many get $ off sales with coupons available.

Old School Cheesecake Pie is perfect when you want cheesecake but not a lot of it. Fast, easy & none of the hassle of making a big cheesecake.

When ready to bake cheesecake, preheat oven to 325 degrees F.

In a bowl, combine cracker crumbs and butter. Firmly press onto the bottom and up the sides of a 9 inch pie plate. (If using a deep dish, like a pyrex, bring crust up to just to the bottom of the ridges.) Cover and refrigerate for 30 minutes. (See instructions to bake crust if desired, below.)

In a large bowl, beat the cream cheese and sugar just until smooth. Add eggs, one at a time, beating on low after each until just until combined. On the lowest setting, add in vanilla and lemon zest and beat just until blended.

Pour into prepared crust and bake for about 25 minutes or until almost completely set; the very center, about 2 inches or so, should still have just a little bit of a wobble when the pan is gently shaken. Remove from the oven; let stand for 5 minutes while you prepare the topping, leaving oven on.

Combine the sour cream, sugar, and vanilla; it should be a thick pourable consistency, if not, add milk by the tablespoon until it is. (Should be able to pour while nudging with a spatula, about the consistency of a thick pancake batter.) Pour and spread carefully over the cheesecake.

Return cheesecake to oven and bake an additional five to seven minutes longer, until topping looks just “set”. The topping should still be pure white; don’t brown it or allow it to pick up any color. Cool on a wire rack for an hour and refrigerate eight hours or overnight before serving.

To bake the crust:

Preheat oven to 350 degrees F. Bake for 6 to 8 minutes, then cool before filling.

I’ll be sharing at Fiesta Friday #313. I’ll also be sharing at the Weekend Potluck #414 at South Your Mouth & What’s For Dinner Sunday at the Lazy Gastronome. Be sure to stop by if you’d like to catch up on your favorite bloggers in one place every week.